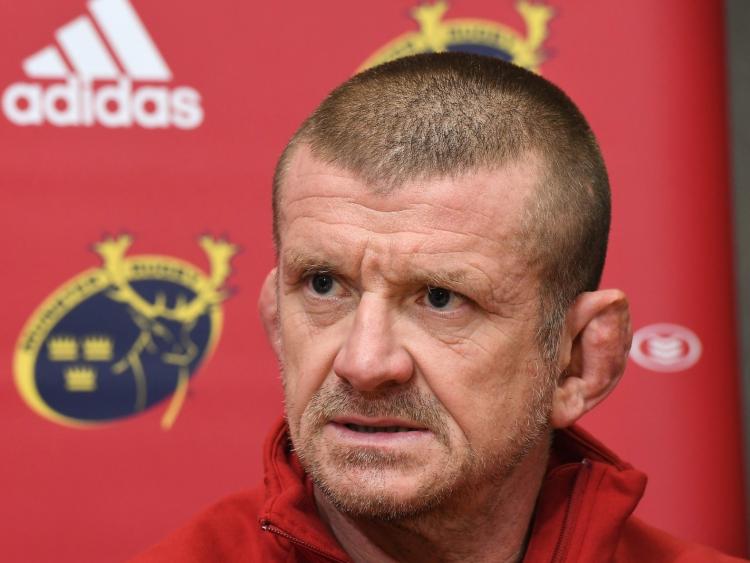 Graham Rowntree has described their short five-day turnaround for this Friday’s Guinness PRO14 semi-final with Leinster as ‘irrelevant’.

Munster secured their place in the last four of the Pro14 with their runaway bonus point win over 13-man Connacht at the Aviva Stadium last Sunday.

In contrast, Leinster, who had already secured their spot in the semi-finals were able to rest the vast majority of their front-line players for their fixture with Ulster,

Friday night's game at the Aviva Stadium, 7.35pm, will be the third time in successive seasons that Munster have faced Leinster in the Pro14 semi-finals in Dublin. Holders Leinster have won each of the two most recent semi-final meetings with Munster in Dublin.

In fact, Munster's only victory at the Aviva Stadium in 12 visits since the ground's redevelopment was against Leinster in the Championship in October 2014.

Leinster have won their last 16 matches at the Aviva Stadium in all competitions since Toulon beat them there in the Heineken Champions Cup in December 2015.

However, Munster forwards coach Rowntree says neither the result of the last two semi-final meetings with Leinster nor the five-day turnaround are viewed as being significant factors in their camp ahead of Friday’s showdown.

Graham Rowntree told Munster’s weekly media briefing carried out remotely over Microsoft Teams: “You are going to ask me about the short turnaround? It is irrelevant really because we are match hardened now.

“We have played two good games and we are ready Friday night for another one. We have recovered well and we are battle ready for this game.

“It irrelevant that (Munster have lost the last two Pro14 semi-finals to Leinster).

“We are going into this game Friday ready and determined. We have not spoken about the turnaround. We are ready for another game.”

Rowntree said Munster would take plenty of positives from their most recent meeting with Leinster less than two weeks ago when they ran the Pro14 holders to just two points.

”The most recent game with Leinster was a proper game, wasn’t it? It was our first hit out since we played the Scarlets (last February). We had no warm-up game or no internal game because we had a challenging 10 days leading into the return to rugby.

“There were plenty of positives to take out of the recent game with Leinster. We could have won that game.

“We were gutted that we lost that game, that’s for sure, so plenty of positives.

“It has given us momentum. We have a settled team or as settled as you can be after two games.

“The lads are match ready and hardened. We were very mindful coming back into this programme after lockdown about body hardness and contact but what they have shown is that they are contact ready.”

Munster management will take a big selection decision in the back-row with CJ Stander, Peter O’Mahony set to side along with either Jack O’Donoghue, Chris Cloete or Tommy O’Donnell.

”You have guys there all with different stand-out qualities. It is how you use them.

”We are mindful too of the correct impact player coming on the field as well, what we want there.

”Certainly guys put their hands up on Sunday for selection. Jack was good. He is athletic and energetic. Chris gives us that breakdown pressure.

“I keep saying again against this team we need to very selective and very careful as to when we go in to challenge that breakdown because we can’t be numbers down elsewhere.”

Rowntree said he is happy with where Munster are both physically and mentally.

“This is knock-out rugby against a team, I mean they had the luxury of resting guys at the weekend and they will have had a good hit out (on Monday) which we weren’t able to do, but we crack on with it.

”I am happy where we are mentally and physically at the moment going into this game.

“We have played against them enough and previous form means nothing to me or this team, going into this game it means nothing.

“All I am really stressing to the guys is how hardened we are going into the game.”