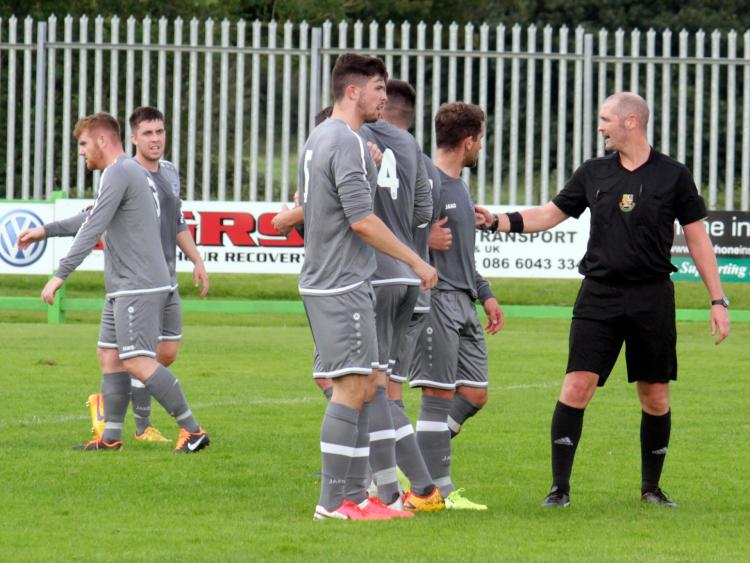 Ballynanty Rvs continued on their merry way atop of the Premier League with a gritty display for a hard earned win over Regional Utd.

After the heroics against Pike a couple of days earlier the fear was Balla would not be able to replicate the intensity but they came good again to record their fourth win in four outings.

Once again Aaron Nunan came up trumps with the winning goal but this was a victory shaped by some solid defending and a bust midfield that gave Regional no time in possession.

Things could have been much different but for Balla goalkeeper Stephen McNamara’s point blank save to deny Ross Fitzgerald in the opening minutes. That set the tome for some superb defence well marshaled by Dan Lucey.

Balla were playing some very good football and the fact they kept their shape throughout showed up Regional’s lack of inventiveness going forward. As the visitors chased the game in the second half they reverted time and again to high ball into the area but the fact that they delivered them mostly at a flat angle meant the Balla rearguard were able to deal with the threat.

The sides looked like going in all level at the break when Balla were awarded a free kick midway inside the Regional half. Rian O’Connell’s delivery was stepped over by Derek Daly and Adrian Power’s deft touch presented Arron Nunan with a chance from 6 yards and he rarely misses these.

As expected Regional pushed on after the break but real clear cut chances were few and far between.

Aisling Annacotty eased into second place, three points behind Balla with a game in hand.

The scoreline suggests an easy afternoon for the Munster champs but the home side and in particular Eoghan O’Neill and Brion Moriarty caused them plenty of problems. In the end the power of Aisling came to the fore.

Thomas Clarke opened the scoring heading home from a corner kick midway through the first half.

After the break Nathan O'Callaghan fired through a crowded goalmouth to double the lead and shortly after Shane Clarke put the ball on a plate for Adam Foley to bravely head home.

With the game wrapped up Killian Moloney and Conor Coughlan tacked on further goals.

Fairview, with one eye on their upcoming FAI Junior Cup final, picked up three points with a comfortable win over Mungret Reg.

Both teams in need of a boost met in Garryowen as Pike Rvs edged out Geraldines to return to winning ways.

Christy O’Neill broke the deadlock on the stroke of half time after good work by Dean McNamara.

After the restart Evan Patterson delivered for Steven McGann to head in and level the tie.

With 20 minutes to play Eoin Hanrahan crossed for McGann to score his second and give Pike the lead.

With Geraldines all out in search of an equaliser a quick breakaway allowed Kieran Hanlon the chance to secure the points with a final goal.

Janesboro recorded their second win of the season when they travelled to Kilmallock and returned with all three points.

Aaron Fitzgerald opened the scoring to put ‘Boro on their way.

Adam Costello scored the second and important goal to secure the points.

Nenagh and Prospect played out an entertaining 2-2 draw at the Tipperary venue.

Jason Cross put Wayne Colbert’s side ahead but Dan Butler equalised for the home side.

The visitors again took the lead when Eddie Brazier netted but Nenagh were not to be denied and Steve Daly scored to give them a share of the spoils.