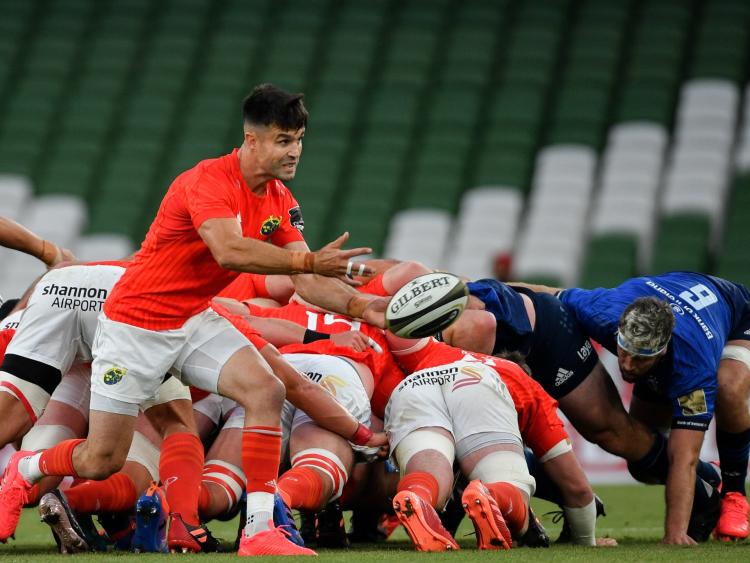 MUNSTER need may have been greater but holders Leinster still found enough to edge past their arch rivals 27-25 in a pulsating Guinness Pro14 interprovincial derby at the Aviva Stadium on Saturday night.

It might have been six months since the side were last in competitive action due to the coronavirus pandemic, but you certainly not have noticed as the great rivals served up an enthralling contest.

Munster and Leinster shared six tries evenly in a game that was brimful of intensity and physicality.

Winners Leinster were a shade more clinical and ruthless in attack. however, with Munster scoring two of their tries when the home side had a man in the sin-bin.

Munster's only victory at the Aviva Stadium in 12 visits since the ground's redevelopment came against Leinster in October 2014.

The towering Springbok' had to be replaced as had injured prop Dave Kilcoyne who only came into the side a short time before kick-off as James Cronin was ruled out with a groin injury.

Munster overcame the double setback initially when Andrew Conway dotted down after a concerted period of pressure from the visitors.

Chris Farrell did the initial damage with a terrific carry which stretched the Leinster defence. With Munster having a penalty advantage, they swung the ball left and Conway had the relatively easy task of running in for the five-pointer from Hanrahan's pass.

Hanrahan's successful conversion made it 7-0.

Phase after phase from Munster before Andrew Conway crosses!

To their credit, Leinster hit back quickly in the manner of champions. Prop Cian Healy rolled over the tryline from a well-executed maul.

The home side had earned the field position after Munster coughed up a cheap penalty. Sexton nailed the conversion to tie the scores at 7-7.

The see-saw nature of the scoring continued when out-half Hanrahan kicked an excellent 27th minute penalty after some excellent work at the breakdown by CJ Stander.

Back came Leinster once more, however, and Sexton levelled the scores just after the half hour mark with his opening penalty of the evening from just inside the Munster '22.

Munster had enjoyed the lions share of territory, 64%, as well as possession 55% during that opening half an hour.

Munster were back in front four minutes before half-time when Hanrahan landed his second penalty goal of the game.

However, as so often happens, Leinster showed the mantle of champions again just before half-time. From a period of concerted pressure, Robbie Henshaw's neat grubber was seized upon by Gary Ringrose who dotted down.

Sexton's conversion had the home side 17-13 to the good at the break.

That pass from Johnny Sexton

Leinster tightened their grip on the game when James Lowe scored his fourth try in seven games against Munster when Sexton combined with Ryan Baird to set the left winger clear.

Sexton nailed the conversion and suddenly Leinster's lead was out to 11 points, 24-13.

With replacement Devin Toner in the sin-bin in the 64th minute, Munster gave themselves a glimmer of hope when Keith Earls produced a finish in the left corner to dot down.

Hanrahan nailed a very difficult conversion from the left touchline and suddenly there were four points between the sides at 20-24.

However, poor discipline cost Munster almost straight from the re-start and substitute Ross Byrne punished the visitors when landing an excellent penalty to put seven points between the sides at 27-20.

Munster were not done yet, however. A bout of terrific continuity play involving backs and forwards resulted in Conway dotting down for the second time in the game.

Hanrahan was just off target with the conversion attempt as Leinster retained a two-point advantage heading into the closing five minutes of a pulsating contest.

The home side managed to hold on to that precious lead until full-time.