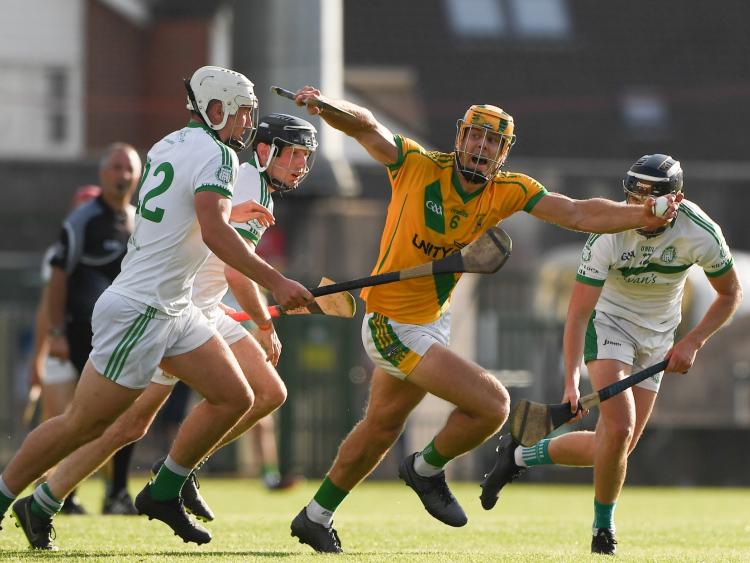 Dan Morrissey of Ahane in action against Kilmallock

SO that's it for adult club hurling championship until the first weekend of September.

The top three tiers of club hurling are now down to the knockout stages after 44 games.

The all-county junior A championship will continue with group games in September.

There are 32 clubs across the senior and intermediate grades and for 18 there is knockout hurling to look forward to in September.

For another 10 clubs there are relegation issues at hand.

There is a SHC County Cup and after all that it leaves Cappamore and Knockainey as the only two clubs who have seen their county championship campaign reach an end.

Both played in the Premier IHC where they were guaranteed three group games, while elsewhere in the SHC and IHC there were only two group games per side but still it's a pity neither club get to hurling into the next month for county championship matters.

A look back over the last three weekends, shows that just six teams enter into the mid-season break with 100% records - Kilmallock and Ballybrown in the SHC, Bruff in the PIHC and Newcastle West, Feohanagh and Na Piarsaigh in the IHC.

Delving into the scoring statistics, Ballybrown lead the way in the senior championship with nine green flags for goals, while Adare raised the most white flags, 45, for points.

Firstly, isn’t it great that we actually got to see club championship in this most unusual of years and for that we need to be grateful and not take anything for granted.

But on the field of play, hurling is hurling and competitive streak doesn’t diminish.

Look at the final six in the Bon Secours Hospital sponsored Limerick SHC – Patrickswell, Kilmallock, Na Piarsaigh, Doon, Ballybrown and South Liberties – all pretty regular in the closing stages of the championship across the last few years. No break through team or surprise packet.

In the Premier IHC, Bruff, Kildimo-Pallaskenry and Mungret would have been on the short-list of most for outright honours from the outset of the championship regardless of the format and all three are still there chasing silverware and promotion into the senior ranks. Glenroe are the fourth semi finalist and what a run for the south Limerick men – making an immediate impact after their county IHC title last season and promotion into the second tier.

In the 2020 Limerick IHC, the second string sides from Na Piarsaigh and Kilmallock have both reached the quarter finals – both have also lost players up to their senior team so interesting times ahead for those clubs.

Looking at the eight – no major surprises again. Newcastle West, Croom, Na Piarsaigh and Hospital-Herbertstown all involved in the knockout stages last season, while Feohanagh and Knockaderry have also reached this stage in recent seasons. The remaining duo are newcomers to this grade this season – Pallasgreen relegated down from the PIHC and Kilmallock winners of the 2019 JAHC.

Positives aplenty for all those 18 teams chasing silverware.

But for eight clubs dropping down a grade is a real concern with a relegation play-offs to come.
Garryspillane and Murroe-Boher are in the SHC play-off – The Bouncers in their second season in the top flight and the east Limerick men three years up.

In the Premier IHC, Bruree play Dromin-Athlacca.
Bruree were senior in 2016 but haven’t featured in the knockout stages in four seasons in the PIHC. Dromin-Athlacca are just two years in this grade after their 2018 IHC title.

In the Limerick IHC, two defeats are needed to relegated Effin, Granagh-Ballingarry, St Patricks or Tournafulla who were also in relegation trouble last year.

* See here for all championship dates and venues for knockout games