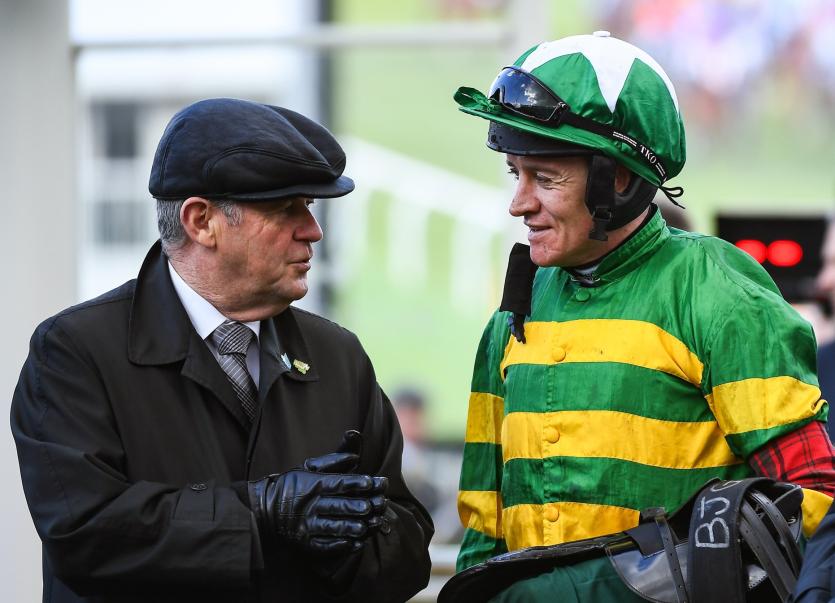 JP McManus, left, and Barry Geraghty pictured in conversation at the Cheltenham Festival

BARRY Geraghty, the retained jockey of leading racehorse owner JP McManus has called time on a glittering career in the saddle.

Top National Hunt jockey Geraghy says it has been a pleasure to work as retained jockey for leading Limerick owner McManus during his distinguished career in the saddle.

Forty-year-old Geraghty has been number one rider to one of the most powerful owners in the sport after succeeding AP McCoy in the summer of 2015.

The pair enjoyed many big race successes during their five-year partnership, scoring their final Cheltenham Festival success with Saint Roi in the County Hurdle last March.

Announcing news of his retirement, Geraghty said of McManus: "JP [McManus] is obviously one person that I had to speak to about it, but I’ve only been able to do that over the phone. It was never going to be a difficult conversation as I knew JP, Noreen and all of their family would be happy for me and that they would have my best interests at heart. They have all supported me so well since taking the job.

"He knows as well as anyone how important it is to be able to go out in one piece. It’s been great riding for him and the quality of horses he has is outstanding. It was brilliant to ride five winners for him at this year’s Cheltenham Festival and try and repay him for all that he puts into our sport.

"He has a great understanding of the game and could just give you a tiny nugget of information or an opinion that would help you win you a race. One example was with More Of That in the World Hurdle, when he suggested that I follow Annie Power through the race wherever she sits and he got it spot on. That was the case a lot of times on a number of different horses over the years."