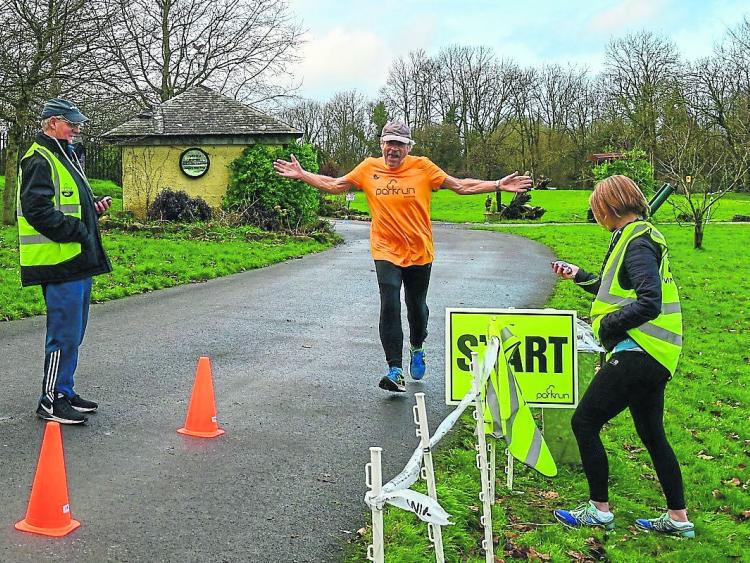 Dr Seamus O'Flynn completing one of his many parkruns

I FOUND myself standing beside a large pond in Platt Fields Park in the centre of Manchester early one Saturday morning in October 2016 – gazing at the fowl while people of all shapes and sizes were gathering – arriving as families, couples, and more on their own.

They were dressed for a physical challenge – wearing running gear.
One man wielded a small megaphone and began addressing those present while the latecomers assembled hurriedly.

The prescribed activity, I learned, was a timed run/walk covering a distance of 5K throughout the park.

He welcomed one and all, outlined some simple rules about courtesy, children, buggies, and dogs, and then blew the whistle on the dot of 9.

A crowd soon became a long meandering stream of mankind, wandering through the park with athletic types up front and walkers to the rear.

For the following hour or so, it was interesting to observe the changing faces and body language of those Mancunians as they persevered with their efforts.

On the final straight, all were applauded for their effort finishing with a final sprint followed by exhilaration and relief.

There was a palpable sense of satisfaction, gratitude, and camaraderie. I had attended my first parkrun.

A seed was planted; it would take another few months to grow until I found myself officiating at Clarisford parkrun in Killaloe on St Stephen’s Day, 2016.

I was “volunteered” for the role of timekeeper at my second parkrun – this was a much smaller, more intimate event with less than 40 souls – the occasion was followed by tea, coffee, and Christmas fare.

I had tried running in the past, but it had failed to engage my interest.
However, soon after my parkrun experience, I purchased suitable gear and headed out from my home with a view to becoming a runner.

Less than 200m down the road, I ground to a halt gasping for air. After a few minutes, I recovered enough to start running again but this time, at a modest pace.

I was learning that, at nearly three score and ten, “one must find a pace that suits you!”

It took me nearly a month to find my pace before I was able to run 5K nonstop. I had become a runner yet I had many lessons to learn about dealing with joint pains, self-doubt, willpower, and resilience.

One of the abiding lessons I have learned concerns a voice in my head which challenges me within the first five minutes of every run, dismissing the activity as pure misery, and instead suggesting that I would be far more content sitting at home in a comfortable chair relaxing.

I have learned to ignore this “voice of inertia” which fades away only to be replaced with inspiring thoughts that carry me through my endeavours leading to a sense of achievement at the end.

I have reacquainted myself with my native city’s streets and the surrounding countryside and forests through running.

Since joining Dooneen A.C., I now find myself running 2-3 times a week - sometimes on my own but more often in company come rain or shine.

I have attended more than 29 different parkrun events, both at home and abroad, and have had the pleasure of running in road races in counties Limerick, Clare, and Tipperary, usually accompanied by 200-600 fellow runners.

Running has enhanced my fitness, agility, resilience, and mental health. I would encourage one and all to move, to break out of the inertia, to exercise to one’s limit, as the benefits will not only be felt in the body but also in the mind.