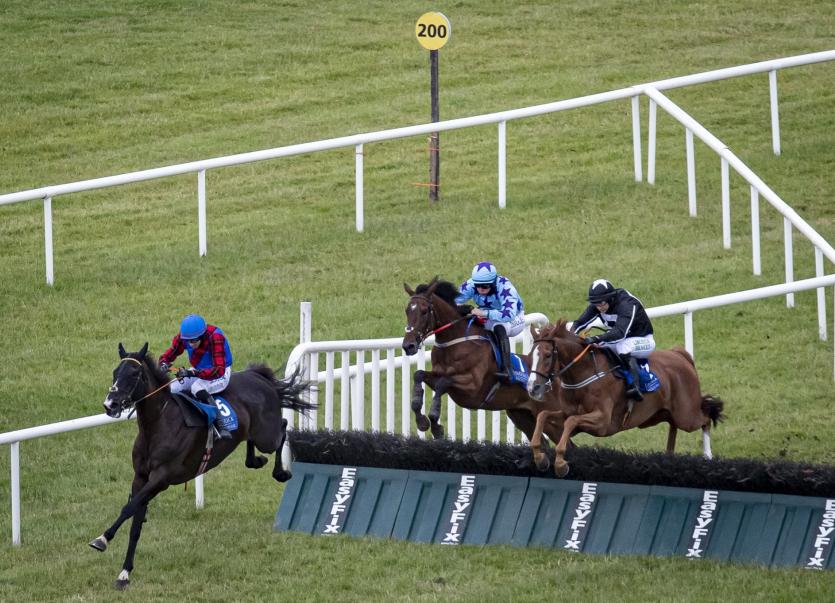 Poseidon (near-side) throws down his challenge on the way to winning for Cathal Landers and Charles Byrnes at Limerick. Photo: Patrick McCann/Racing Post

Charles Byrnes and Cathal Landers were local winners as jump racing returned to the roster for the first time since racecourse action resumed early last month at Limerick on Monday. It was also the first day of the 2020/2021 National Hunt season and the Ballingarry trainer with the Oola conditional rider as Poseidon took the 2m conditions’ hurdle in the colours of Martin White. The 3/1 chance was a length and three-quarters too good for the Shark Hanlon-trained Rewritetherules.

Laws Of Indices scored a last gasp win for Curragh trainer Ken Condon in the Foran Equine Irish EBF Auction Maiden at Navan on Tuesday. Billy Lee, partnering his 11th winner of the season, continued his great run of form when getting the 3/1 shot up in the final stride to pip Jessica Harrington’s Street Kid by a short-head. Abbeyfeale apprentice Paddy Harnett came in for the ride on the Denis Hogan-trained Boughtinthedark at the eleventh hour and made the most of the opportunity when getting the 5/1 shot home by three parts of a length in the near-6f handicap. Joey Sheridan had been due to ride the four-year-old but failed to complete the necessary paperwork required to attend the meeting under the Covid-19 protocols and Harnett stepped in to ride the sixth winner of his career and his first for high-flying Hogan. Chris Hayes won the day’s finale with Gordon Elliott’s Lalipour just getting the better of Gavin Cromwell’s 100/30 favourite Aasleagh Fawn to score by half a length. The James Power-owned four-year-old was brought from well off the pace by Hayes and scored a 25/1 success when getting up in the closing stages to deny the market leader.

Billy Lee rode his fourth winner of the season so far for Cashel trainer Paddy Twomey when the pair took the 10f maiden at Fairyhouse on Thursday with Pontchateau. Never far off the pace, the 9/1 chance got to the front over a furlong from the finish and comfortably held the Joseph O'Brien-trained 7/4 favourite Hosier by two lengths at the line. Lee has ridden winners for six different trainers so far this term.