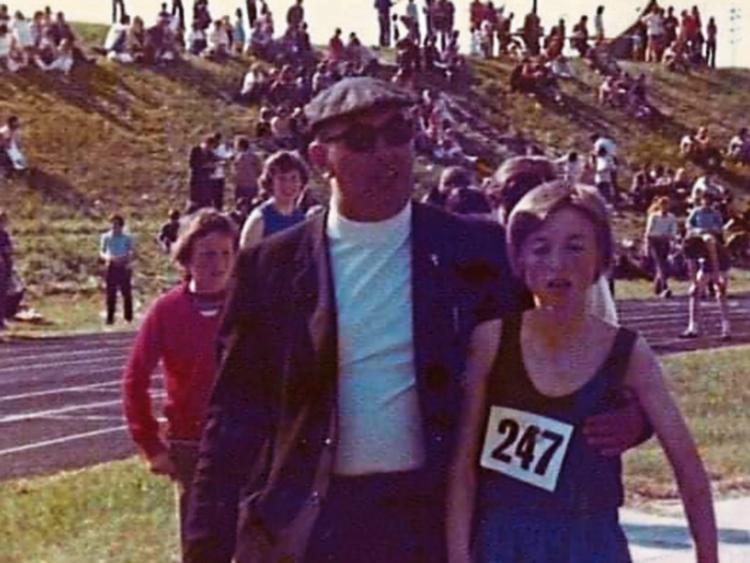 Frank O'Mara and Fr McNamee after the Munster Schools Junior 1500m in 1975 at Plassey. O'Mara describes this experience as ‘Formative Experience #1’

Lately, I’ve been thinking about my days as a boarder at St. Munchin’s.

We were dominant in schools athletics in the 1970s. Some students went on to international success led by Neil Cusack’s Boston Marathon victory in 1974 and Niall O’Shaughnessy’s world leading time in the mile in 1977.

We ran around the rugby fields in Corbally encouraged by Fr. MacNamee and the athletics coach Declan O’Donoghue.

They ferried us to Glenstal Abbey for training. It was site to the North Munster Schools Athletics championships. It had a pristine grass track and was precisely lined. Envy.

Years later, even while racing on the best European tracks, I would occasionally drive out to the Glenstal and run on that grass track.

It was so idyllic. Trees on one side with a tiny clubhouse nestled in a clearing. We would stretch against the aging structure looking out over the manicured track with a lake in the background and the smell of freshly mowed grass in the air.

I reserved training there for shakeout sessions before a big race. There’s nothing like blasting 200s on a soft grass to rejuvenate the spirit, especially on a pleasant evening. An extra few in bare feet. It still reminds me of what I loved about running.

In 1975, a synthetic track was built at Plassey on the banks of the Shannon. It wasn’t the best available.

It was black rubber unlike the red tartan tracks you saw on television, but it was an upgrade on grass. The surrounding berm gave the track an amphitheatre feeling, and when people crowded the banks it could be quite intimidating.

When we were jaded from avoiding rugby boot divots at Munchins, we’d all pile into Fr. MacNamee’s Renault 14 and chat excitedly all the way to Plassey.

A short jog on the river bank, half-hearted instructions (fast but not too fast) and we’re off. Every interval was treated like a race. Inevitably, we ran faster than charged. But that was likely the plan.

I had many formative experiences on the Plassey track. Three in particular spring to mind.

First, I discovered I had a strong finish when I came from a time zone back to win the Munster Schools Junior 1500m in 1975. I was a small kid, but that race proved I could win.

Second, I realized my national ambitions by winning the Irish Schools Intermediate 1500m in 1977. I led from the gun and won easily in record time.

Third, that same year, competing as a guest in the Ireland versus Greece International, I grew up.

I was 16 and filling out the field against adults but performed surprisingly well and was rewarded with a new 800m personal best.

My favourite memory is the Ireland versus Russia versus England meeting in the summer of 1991.

I had won the World Indoor Championships that March and a mile race was staged to highlight that accomplishment. I was quite nervous before the race and somehow compounded my anxiety by leading from the gun. It is nerve racking leading a mile; but I was on my home track, and I did manage to win.

These days I live in hot and humid Little Rock, Arkansas, and when I exercise in the morning or evening in 35C weather I long for one of those pleasant Irish evenings in Glenstal, languidly stretching, the smell of just cut grass in the air, the shimmer of the lake.

Oh well, I don’t even know if it’s there anymore.

Editor's note: Thanks to Karen Raine for facilitating this piece with Frank. For more see limerickleader.ie