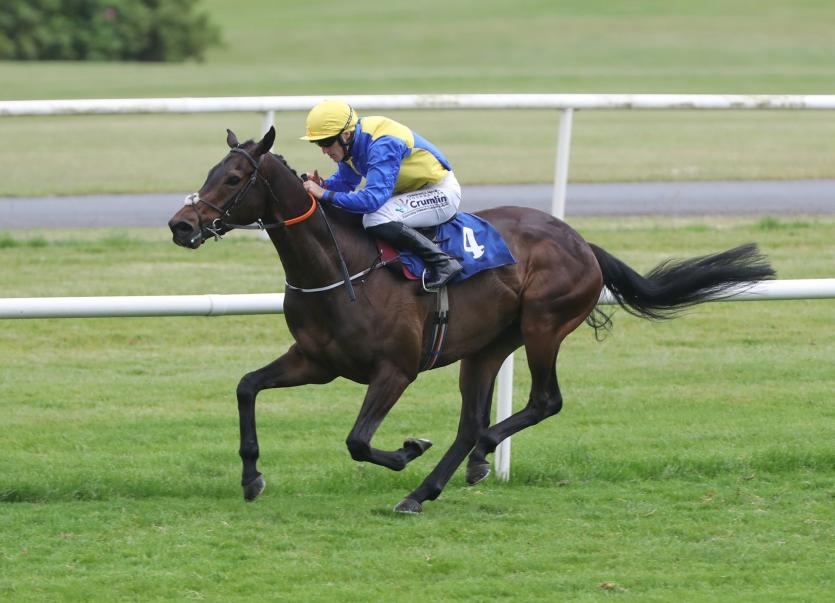 Limerick's Billy Lee landed his second double in as many days when riding winners for Paddy Twomey and Michael O'Callaghan at Roscommon on Monday last.

He notched up two winners at Leopardstown on the previous afternoon and was quickly off the mark at the western venue when winning the opening 7f maiden on Twomey’s Strongbowe. The four-year-old made a promising debut at Cork in May of last year and ran out a good winner on his first run since then, the 5/6 favourite readily beating 33/1 outsider El Padre by a length and a quarter. It was far tighter at the conclusion to the 10f handicap with the gambled-on Alexei Vronsky, the 3/1 favourite, getting the better of Dazzling Darren by just a nose.

Lee was at it again at Gowran Park on Wednesday where he partnered a winner for Henry De Bromhead. The pair took the second division of the 9f maiden with 100/30 chance Hurricane Cliff which held on to win by half a length from the Donnacha O'Brien-trained Great House.

Ballingarry trainer Richard O’Brien beat Austin Leahy to the line to win the 8f handicap at Limerick on Wednesday. A little unlucky at Leopardstown previously, Global Pass came good in the colours of John Twomey to win under Ronan Whelan, the 9/2 chance getting home by three-parts of a length from the Leahy-trained Han Solo.

Billy Lee’s great run of form continued at Fairyhouse on Thursday. He won the 12f handicap on the Willie McCreery-trained Romantically, keeping it simple from the front to beat Joseph O'Brien’s Tonkinese by a length and a half at odds of 12/1 and there was more to come at Tipperary the following afternoon.

He booted home a treble on the card at Limerick Junction, beginning with another winner for Willie McCreery. The pair won the 5f handicap with the impressive Jungle Jane, the 7/1 shot scoring by all of three and a half lengths. Bigger targets certainly lie ahead for her and the same can be said of Sunday Sweet which won the median auction fillies’ maiden in equally convincing fashion. The Paddy Twomey-trained 7/4 chance won by an easy four lengths and a step up into Group company could be next for the Edward Walsh-owned winner. Lee had to work far harder to wrap up another successful day. He won the afternoon’s finale, the second division of the 9f handicap, on the Andy Oliver-trained Silvertown, the well-touted 9/2 favourite scoring by three-parts of a length from Jessica Harrington’s Waterville Lady.

Clarina trainer David Geary recorded his first winner when 20/1 chance Getawiggleon battled well to take the 10f fillies’ maiden at Leopardstown on Sunday. Owned by Stacy Fitzgibbon and ridden by Conor Maxwell, the three-year-old pipped the Willie McCreery-trained 6/4 favourite Epona Plays by a short head with Jim Bolger’s Theophile a close third. “That's my first winner and I've only had a few runners over the years. It's a nice day and a nice place to get a winner. Geary said, ‘'m a farrier by trade and just have another two-year-old in training. Maybe I’ll get a few more now.  Hopefully she can pick up a few more races along the way. We’ll see what mark she gets after this and make a plan then.”

Aidan O'Brien was responsible for four winners at Royal Ascot and an Irish-trained tally of five was completed when Jessica Harrington landed a final day with the stunning Coronation Stakes success of Alpine Star. She recorded a four and a quarter length success at odds of 9/2 under Frankie Dettori to emulate her half-sister Alpha Centauri which won the race in the same Niarchos Family colours in 2018. Along with four winners, Ballydoyle runners also finished runner-up on four occasions and third on three occasions. Aidan O'Brien’s tally was enough to see him finish runner-up in the leading trainer standings to John Gosden. His winners were Battleground, Circus Maximus, Russian Emperor and Santiago and he can now boast 74 winners at the meeting, second only in the all-time standings to the 81 winners trained by Sir Michael Stoute.