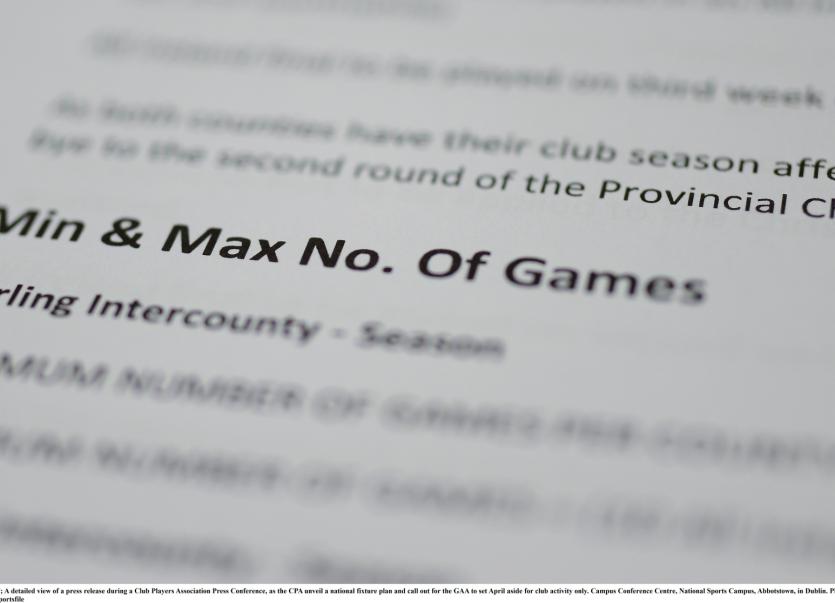 The CPA (Club Player Association) are calling for the GAA to apply 'rules and sanctions' to protect club time to avoid any future damage to the association.

“The GAA must clearly demonstrate parity of esteem across all its members at this most difficult crossroads,” the CPA outlined in a statement.

Chairman Micheál Briody calls for 'respect' and 'integrity' when using the 11-week window.

“It will bring a great lift to communities to get our games back under way,” Briody stated while calling for counties to use their full window available to club competitions.

The Limerick CCC have not yet outlined their plans to play their club championship but news is expected in the coming days.

The second prong to the CPA's attack was the need to keep the club window free from county training, questioning how the GAA's 'leadership' are will ensure that county players are left free to focus on club duty.

“We call on Croke Park through the powers vested in The Management Committee at a Special Congress held on April 17th 2020, to use those powers to take a stand once and for all on this and rule with appropriate sanction.”

Executive member Liam Griffins says the GAA challenge now and into the futures is to address all of the issues which are collectively causing 'such dissatisfaction' amongst the playing population.

He refers to the 2015 annual report by former GAA Director General Paraic Duffy. These issues have not still not been satisfactorily and properly addressed.

“For over a decade the GAA has been aware of two persistent and important issues that it has, as yet, failed properly to address. These are the issues of player overtraining and burnout, and a fixtures calendar that does not provide club players with a fair schedule of matches.”

"The CPA was formed because of all those findings and the deep dissatisfaction amongst the playing population. We fully acknowledge that there should be no need for a CPA if those findings had been taken seriously into consideration.

"Regrettably despite the CPA’s engagement with the Association over almost four years now we have been unable to make satisfactory progress on the GAA’s own findings.”

The Club Players Association recently held its AGM by videoconference, reaffirming its continuing campaign to Fix the Fixtures.

The AGM took place remotely on account of Covid19 restrictions. Chairman Micheál Briody was re-elected to serve for a further year, with Tommie Kenoy replacing Michael Higgins as secretary and Joan Kehoe taking over from Anthony Moyles as Treasurer.

Micheál Briody thanked Michael Higgins and Anthony Moyles for their contributions over the past three and a half years.

“Michael represented the CPA with passion on the Fixtures Task Force in 2019, and his excellent contributions were motivated entirely by support for the plight of club players.

"Anthony has also been involved since the outset and has represented the CPA numerous times in the media and will continue to do so in the future on an occasional basis.”

“We welcome Tommie and Joan to their respective new positions on the executive and we are fortunate to be able to avail of their unique expertise and experience."

Five new members have executive: Kieran Fitzgerald from Corofin club in Galway, Cahir Healy from Portlaoise club in Laois, Denis Coughlan from the Glen Rovers club in Cork, Colm Garvey from the Kilmore club in Roscommon and Paraic Fanning from the Mount Sion club in Waterford.

“Regarding my own reasons for joining, I am concerned about the unfair situation of my friends who just play club. My own personal reason for having a passion to change things stems from my non-involvement with my club over my years as a county player," commented Laois dual star Cahir Healy

I am a county panel member at the moment and a GPA member, I am proud to play for Laois but I still don't feel county players should be strangers in their own clubs which I feel is what is happening all over the country. The clubs games and county games are all part of our one association, we must find a way that they both thrive together and not be in conflict with each other which is what is clearly happening”

The recently retired Kieran Fitzgerald of All-Ireland champions Corofin has watched the CPA with a 'keen interest' and has a decorated club career.

"I have seen and heard on a weekly basis the continued frustrations of my fellow players regarding the uncertainty of fixtures and the lack of a formal consistent playing calendar," he said.

"I have seen at first hand the unnecessary sacrifices players have had to make and the pressures players have been put under just to play the game they love because of lack of consideration and foresight by leadership of the GAA.

"The club game is the heartbeat of the GAA but due to neglect and disregard, it is slowly dying on its feet.  I am delighted to join the national executive of CPA and I am looking forward to assisting in getting a positive outcome in this regard for club players across the country".

Briody concluded by stating that the CPA will continue to lobby the leadership of the GAA in 2020 and beyond for an improved fixture schedule that ensures everyone equally belongs to the GAA.

"We have been suppressed by various people in the GAA over the years in the hope that we would go away. But we are not going away. Logic and reason is on our side and the statements above from our new executive members proves that club players are still not getting fairness.

"We look forward to working with the leadership of the GAA to help get a resolution to this once and for all. We simply cannot enter 2021 without an acceptable games programme and calendar that is acceptable to the playing population. If we do we will compound the problem and do further irreparable damage to the Association”

Executive Members of the CPA