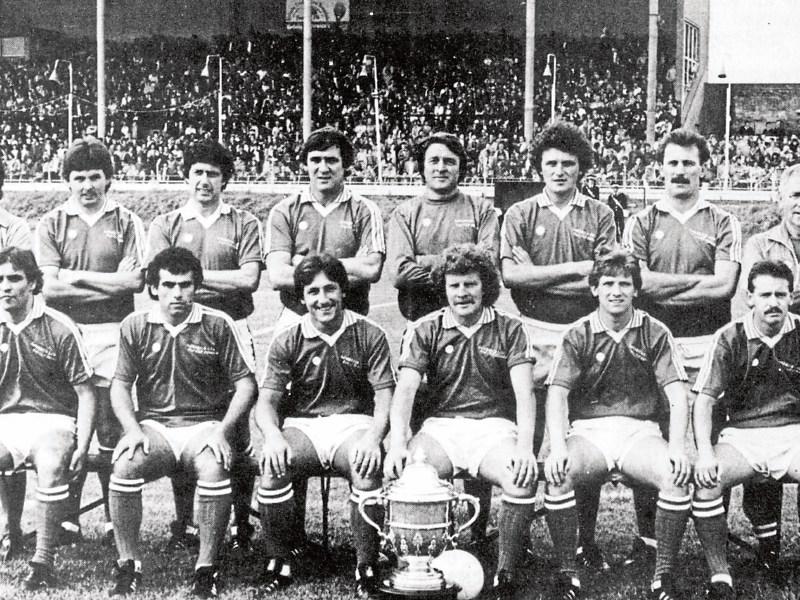 An emotional atmosphere and an occasion to savour at Dalymount Park last Sunday, as Limerick won the F.A.I. Senior Cup for the second time in their history by beating Bohemians on a 1-0 scoreline.

Paradoxically, not a great game but most certainly a great victory with ultimate success dictating that Eoin Hand now leads his squad into Europe for the third year on-the-trot.

Truly, a marvellous tribute to the man and to the impact he has made on Limerick’s standing in domestic football.

A memorable occasion also for the 1971 Cup Final survivors, Joe O’Mahony, Kevin Fitzpatrick and Al Finucane, with Fitzpatrick crowning a great career with his second cup-winners medal – the veteran Limerick goalkeeper leading the Limerick choir in the singing of “There is an Isle” after the game is a memory to treasure for the future.

After losing the toss, Limerick faced a near gale force breeze in the first-half when Bohemians, predictably, attempted to apply strong pressure on the ‘Blues’ defence. As it happened, the early signs were ominous for Limerick as Bohemian’s created three worthwhile scoring chances.

Just four minutes had elapsed when Jamieson and Kelly combined in a move which ended in Mick Shelley drifting away from Joe O’Mahony before hitting a first-time effort over the crossbar.

Three minutes later, Limerick hearts missed a beat as Fitzpatrick ‘lost’ a left-wing corner from Paul Doolin, but Jimmy Nodwell rescued the situation with a header off the line.

In the 9th minute, when Rocky O’Brien surged through the inside-left channel, Pat Nolan did desperately well to get back and deflect O’Brien’s goal-bound shot out for a fruitless corner.

Make no mistake about it, Walsh’s influence in those early frantic stages was crucial as, with total composure, he took on and beat Bohemians players at will before spraying intelligent passes around.

Not surprisingly, the Limerick supporters warmed to Walsh’s artistry with their increased vocal support helping to settle the entire Limerick team, all of whom must have taken encouragement from Walsh’s pronounced influence on the midfield exchanges.

That increased composure on the part of the entire Limerick team became more evident in the 13th minute when young Tommy Gaynor superbly slipped Gino Lawless near the touchline before placing a delightful through ball into the path of Tony Ward. –

As he attempted to get in the scoring shot, Ward was ever so subtly nudged off the ball by Dave Connell in an incident which came perilously close to being a penalty offence. Unlucky on that occasion, Limerick were again denied in the 19th minute when Hulmes’ final pass was intercepted by a Bohemians defender after a lovely build-up along the right involving Pat Nolan and Jimmy Nodwell.

Increasingly, Bohemians were being subjected to intense pressure along their left-flank as Tony Ward turned the screws on Gino Lawless – appropriate then that Ward should be a central figure in the move leading to Limerick’s winning score in the 34th minute. Deep in his own defence, Pat Nolan pumped a long clearance up the touchline with Hulmes and Ward combining before Walsh strode menacingly into the Bohemians area, with Lawless temporarily averting the danger by getting back to knock the ball out for a corner.

Ward took the kick and his low cross into the area saw Brendan Storan moving away from Jackie Jamieson to volley into the bottom left-hand corner of the Bohemians net – if the lad plays until he’s ninety, Storan is unlikely to score a more valuable goal during his career.

A marvellous boost for Limerick, being a goal to the good having played against the elements with the ‘Blues’ deserving their lead as, with Walsh and Ward providing the inspirational moments, they had dominated much of the first-half. Mind you, Bohemians came close to scoring twice after Storan’s goal when King and Jamieson were both only marginally over the top with well-struck free-kick efforts from outside the area.

Still, the opening 45 minutes unquestionably belonged to Limerick who were, indeed, unlucky not to go 2-0 in front right on the interval when Gaynor robbed Jacko McDonagh under the stand before moving into the Bohemians area, with the Limerick centre-forward toppling over as Connell lunged in with the clearing tackle – again, an incident not a million miles removed from a penalty decision.

The second-half began promisingly for Limerick with McDonagh forced to concede a corner as Johnny Walsh powered through the middle – Gaynor’s header from Ward’s corner being cleared with difficulty by Dermot O’Neill under pressure from Gary Hulmes. Though constantly forced back into defence, Bohemians surprised everyone when they came within a whisker of snatching a dramatic equaliser in the 51st minute.

After Hand had been penalised in midfield. McDonagh’s quick free caught Limerick in total disarray with Mick Shelley moving in behind the defence to flick a header over Fitzpatrick – to his eternal credit, in a move which contributed to his earning my vote for the man of the match award, Brendan Storan read the situation perfectly for the big centre-half back to effect a dramatic clearance off the line.

Buoyed by that let-off, and a reprieve it certainly was as the Limerick defence was hopelessly slack in attempting to cope with McDonagh’s quick free, the Blues surged back into attack with two legitimate penalty appeals in the 67th minute and 69th minute being over-ruled by referee Kinsella.

First, Dermot O’Neill conceded a needless corner, with Storan rising high to power-in a header from Ward’s kick with the ball deflecting up off right-full Dave Connell onto the crossbar.

Finucane was in quickly to nod the rebound on to Storan with the Limerick centre-back’s attempted shot being knocked away via the hands of Noel King – the Limerick supporters howls of anguish could be heard far and wide when the referee, Kinsella, waived play on.

As it happened, that scenario was repeated just two minutes later Breaking superbly from defence, Finucane linked with Walsh before Ward’s delightful dribbling run ended with Dave Connell knocking the ball away for a corner. Ward took the kick with the ball drifting past Finucane and Storan to the far post where Tommy Gaynor got possession.

A quick turn and shot from the Limerick youngster saw Paul Doolin blatantly charging the kick down with his hands.

In rugby parlance, it might have been construed as a deliberate knock-on, but referee Sean Kinsella, for the fourth time in the game, ignored the penalty appeals from the Limerick players. Easy to be emotionally involved at the time, but subsequent video replays of the potential incidents would indicate that Limerick were hard done by the debatable decisions of referee Kinsella.

After those narrow escapes, the Bohemians goal lived dangerously for a period with Gaynor just failing to get on the end of a Joe O’Mahony free in the 33rd minute, before Gaynor and Hulmes combined in a move which ended Ward’s powerful acute-angled drive being parried out for a corner by Dermot O’Neill.

Total pressure from Limerick, but just one solitary goal to the good with the fragile nature of that lead being exposed in the 85th minute when Bohemians nearly forced a replay.

Out on the right wing, Rocky O’Brien saw his centre into the heart of the Limerick area being miscued by Pat Nolan into the path of Noel King, who duly turned the ball across the face of the Limerick goal where John Raynor, Mick Shelley and Paul Doolin were all queuing up for the scoring shot. Luckily for Limerick, Raynor never even connected with his attempted effort, while Shelley, standing next in line, saw his goal-bound effort deflected away by the covering Joe O’Mahony.

The last act in a dramatic F.A.I. Cup Final had taken place – appropriate that an outstanding Limerick servant in Joe O’Mahony should deny Bohemians a late equaliser.

So, at the end of a season which saw Limerick in contrasting Jekyll and Hyde mood on occasions, the F.A.I. Cup returns to Shannonside with the Dalymount win reflecting the great experience of Hand, O’Mahony, Fitzpatrick, Finucane and others who bounced back after some depressing league results to totally dominate the cup campaign.

Impossible, in a few short paragraphs, to adequately pay tribute to the players and club members who shared in this historic victory. That said, the name of Eoin Hand is writ hugely over this cup success.

When it came to "fighting on the beaches", Hand, backed by a brilliant Captain in Joe O'Mahony, led his men by example.

When the glory days of Limerick soccer are recalled, the name of Eoin Hand will surely have a place of honour.