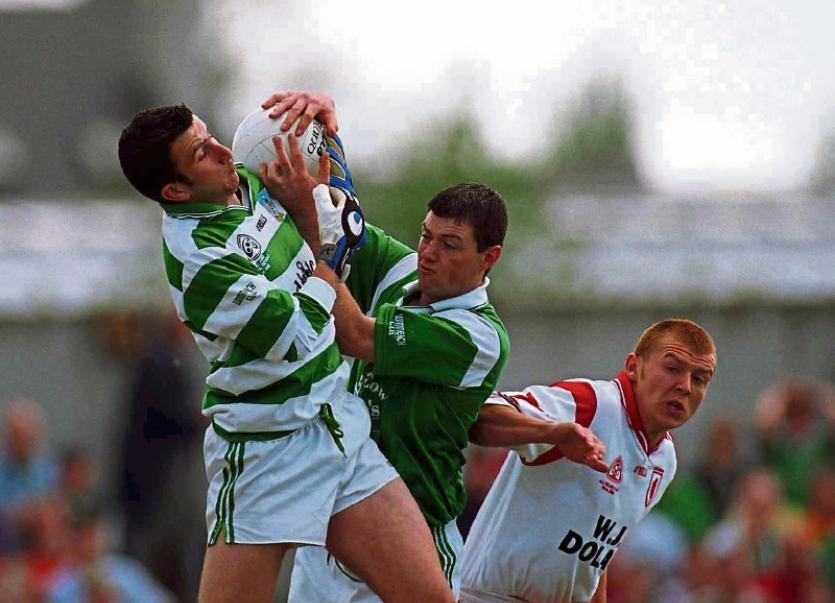 TWENTY YEARS ago, the Limerick U-21 footballers were the sports story of 2000 . Liam Kearns' charges claimed their first ever Munster senior football championship title, defeating Waterford to claim the historic crown.

An All-Ireland semi final 'battle' with Dessie Dolan's Westmeath, saw them into an All-Ireland final with Tyrone.

The Tyrone side was also a ‘who's who’ of footballing talent.

When looking back at the game one name stood out to this journo. Michael Keogh.

The man between the sticks on that championship run, was never to appear again on an U-21 panel or senior panel under Liam Kearns, despite being just 18 in the summer of 2000.

Mike Keogh, a Hygiene Attendant, for the last five years, in UHL, now works on the Covid ward in Limerick's main hospital.

From being behind the full back line, he is now very much on the front line. But what of 2000? and the subsequent years which saw the core of this panel appear in four Munster senior football finals.

“I had to pull away from the panel due to personal reasons at home. My mother passed away when I was 14. So I was only 18 in 2000 and it was tough going at the time for my father. He was great, don’t get me wrong, but when I was away for that year it was tough on him” Mike explained to the Limerick Leader.

“It was a case of coming in from school and then I was straight out the door to training. I was heading off to Mick Neville Park and I wouldn’t be home until 10 or 11.

“We would both just be heading to bed then and again the following morning I would be off to school. It was a case that I was out all the time. We were playing games in Cork and Clare, training in UL etc.

“He wasn’t telling me to stop it or anything like that, but just mentally I knew that there was a bit of a strain on him. So I had a chat with him and I decided to take a step back from the inter county scene.” admitted the Kildimo-Pallaskenry net-minder.

Keogh speaks of his time with Limerick in amazingly clear detail and not like it is nearly half his lifetime ago.

“I was just 18. My manager at the time ‘Oscar’ pulled up outside the shop. He turned around and asked me if I was interested in going for trials with the Limerick U-21s the following night. I said, sure why not, I’ll give it a go”

Keogh impressed enough at the trial, three 20 minute games, that he secured himself a chance to play again the following day. The carefree attitude of Keogh highlighted by his lack of questions.

“Pat O’Shaughnessy from Glin walked over to me and asked me what I was doing the following day? I told him I had a soccer match with Fairview in the afternoon, but he said what about in the morning? When I said nothing, he said he would pick me up at 9am the following morning.

“The following day, I didn’t even know where I was going when Pat collected me. I was asking where are we going? Cappamore he says. There is a match”

That morning Limerick played a challenge match against Waterford and Keogh was informed after the game he would be part of Kearns panel for the Hastings Cup, a regional U-21 football competition, organized by Longford County Board.

Following games against Mayo and Offaly, the news came through that he had made the panel for the U-21 semi final against Cork.

“I was over the moon, I skipped in the door and told my father I had made the panel for the championship” Keogh added.

So what of that season. From Cork, through Waterford, the Westmeath game, followed by the heartbreaking loss to Tyrone.

“My Dad stayed away. He missed the Cork game due to work and when we won that he said he wouldn’t jinx it for me. So he missed the Munster final too. He was very superstitious. Beating Westmeath in the semi final and losing to Tyrone was tough, but when you look at those team sheets they are unreal. The quality those teams had and would go on to have were sensational. Watching it back, you look at the quality there and you think, god we weren’t far off that”

Keogh, now a coach himself, remembers the attention to detail and coaching nous that Liam Kearns instilled in that side and sees it as a bond which kept them together.

“They came through as a group. They would have played 16s and minor together. The first time I pulled on a Limerick jersey was that day over in Cappamore. I didn’t play at any level before that. Talking to them in the dressing room, they were galvanised by past defeats.

“There was a minor final loss to Kerry where they were robbed of a goal and that kind of built bitterness and drive into them as a group.

“That group was tight from a young age. When I came on to it then, I was only 18 and they were bigger than me. They were a great bunch of lads with no airs and graces. Alongside Kearns, they had something special. The tactics were so specific to each game and my kick outs were the reason Kearns had such faith in me” Keogh confirmed.

So what of his decision to leave? Any regrets?

“No regrets at all. My Dad passed away in 2012. He died from cancer. If I had played on longer, it would not have been right for me.

“When I was playing I found I was getting sick a lot, from the stress and wear and tear. My immune system took a hit. So it was the right call, 100%

The final might be a moment in his life he would not have forgotten anyway, but now it carries an even more interesting angle.

“I found out years later, my now wife Shauna was at the game, so it wasn't all lost” - Keogh gleamed.