Limerick hurlers to feature on TG4's All-Ireland Gold in June 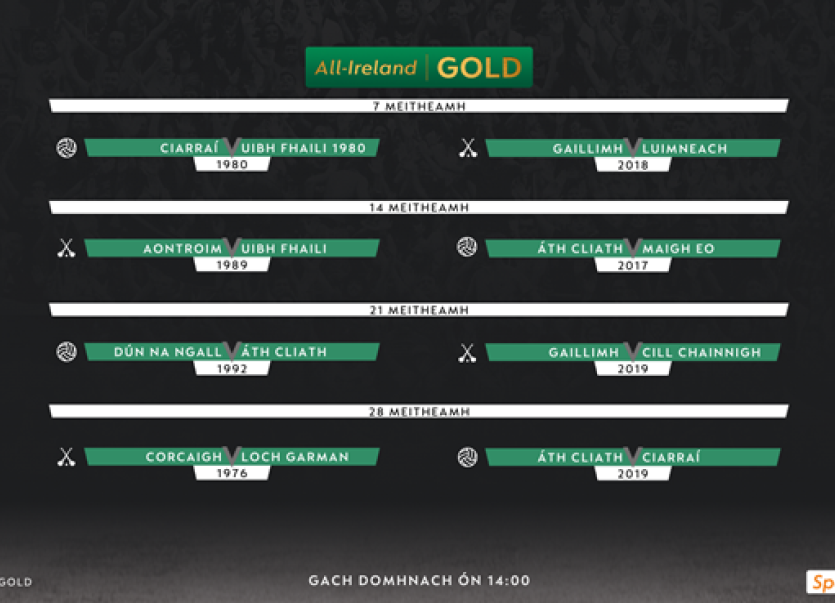 Another month of classic matches have been confirmed by TG4. The channel has announced their All-Ireland Gold schedule for June and it will include Limerick's 2018 win over Galway.  Also included in the schedule is the famous 1980 All-Ireland football clash between Kerry and Offaly, as well as the Donegal and Dublin clash in the 1992 final.

A chance to see Kerry v Offaly in the 1980 All Ireland Senior Football Championship Semi Final. Commentary by Michael O’Hehir. This match was played in Croke Park on the 24 August 1980 and the spectators were treated to a pulsating game of football. Kerry were managed by Mick O'Dwyer and the Kingdom included stars such as Pat Spillane, Mikey Sheehy, Eoin Liston, John Egan, Ger Power, Ogie Moran and 1980 Player of the Year Jack O'Shea. The Offaly footballers were managed by Eugene McGee and his team included Gerry Carroll, Richie Connor and Matt Connor who was one of Offaly's greatest ever sportspeople. Matt Connor was the championship's top scorer in 1980 and he also won Offaly's only GAA All Star Football Award that year. Offaly were confident going into this Semi-Final having been crowned Leinster Football Champions after beating Dublin - the Dubs were going for their seventh Leinster title in a row.

A chance to see Limerick v Galway in the 2018 All-Ireland Senior Hurling Final from Croke Park. 82,300 were in attendance at GAA headquarters to see the 131st All Ireland Hurling Final. Galway went into this Final as the defending champions and were looking to win their sixth All-Ireland Senior title. John Kiely was managing a Limerick team who were appearing in their first final since 2007 and were looking for an eighth All Ireland title - their last win was in 1973. The two counties had played each other in the final twice prior to this: in 1923 and 1980 with Galway winning both. Commentary by Garry Mac Donncha.

A chance to see Antrim v Offaly in the 1989 All-Ireland Hurling Semi Final from Croke Park. This hurling match produced one of the biggest stories of the 1980s.  Offaly had defeated Kilkenny in the Leinster Final and were up against Antrim who had been crowned Ulster champions after beating Down. Antrim manager Jim Nelson and his team were hoping to reach their first All-Ireland Final in 46 years with players such as Terence McNaughton, Olcan McFetridge, Aidan McCarry, Danny McNaughton and captain Ciaran Barr. The date was August 6th 1989 and 64,127 were at Croke Park to see the Saffrons take on The Faithful County.

Action from Dublin v Mayo in the 2017 All Ireland Senior Football Final from Croke Park. This was the fourth occasion that the two counties met in the final, following matches in 1921, 2013 and 2016. Jim Gavin's Dublin team were seeking their third consecutive All-Ireland title, while Mayo, under Stephen Rochford's management were aiming for their first All-Ireland since 1951.  82,243 were packed into Croke Park on the 17th September 2017 to see this match.

A chance to see Donegal v Dublin in the 1992 All Ireland Senior Football Final from Croke Park. Brian McEniff was the man in charge of the Donegal team that day which included Martin and James McHugh, Brian Murray, Declan Bonner, Matt Gallagher, Manus Boyle and captain Anthony Molloy. Dublin entered the match as heavy favourites to win what would have been their 22nd All-Ireland title - their first since 1983, while Donegal were hoping to win their first All-Ireland title. The 105th All Ireland Football Final was played on the 20 September 1992.

Action from Galway v Kilkenny in the 2019 All Ireland Senior Camogie Championship Final at Croke Park. Galway were aiming for their third All-Ireland Camogie title having previously won it in 1996 and 2013. Kilkenny were going for their fourteenth title, their first since 2016. The two teams had only met in the final once before — in 2013, when Galway won. Kilkenny had beaten Tipperary in a high scoring Semi Final while Galway reached the Final after beating Cork in the other Semi Final. The 88th All-Ireland Camogie Final was played on the 8th September 2019.

A chance to see Cork v Wexford in the 1976 All Ireland Senior Hurling Final at Croke Park.  Wexford were going for their first All-Ireland title since 1968 while the Leesiders had won it last in 1970. The Cork team were managed by Fr. Bertie Troy and included players such as Jimmy Barry Murphy, Seanie O'Leary, Charlie McCarthy and captain Ray Cummins who played at full forward and was also the first player to win an All Star in both codes. The Slaneysiders were managed by Tom Neville and had Willie Murphy, John and Martin Quigley, Mick Jacob, Colm Doran, John Nolan, Mick Butler and Texaco Hurler of the Year Tony Doran in their team. The 90th All-Ireland Hurling Final was played on Sunday 5 September 1976.

A chance to see Dublin v Kerry in the 2019 All Ireland Senior Football Final Replay at Croke Park. Both teams were back in GAA Headquarters two weeks after drawing 1-16 a piece in an enthralling drawn match.  82,300 were packed into Croke Park on this Saturday evening to witness a historic match Sunder the lights. Dublin went into the final aiming for an unprecedented five-in-a-row of All-Ireland titles. Kerry and Dublin had met in 13 previous All-Ireland finals, with Kerry winning eight of these and Dublin five.