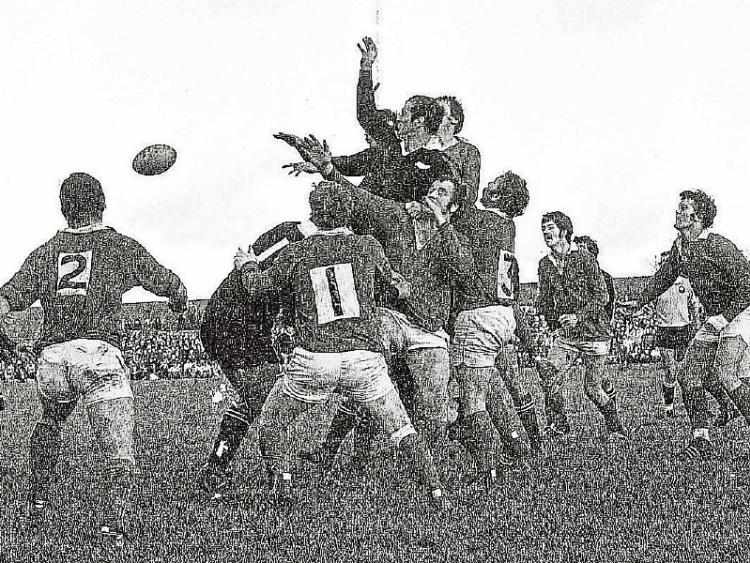 I doubt that any of those spectators privileged to be in attendance at Thomond Park in 1978, will ever forget the rapturous scenes of joy after the final whistle.

For the first time in history, mighty New Zealand had been beaten on Irish soil by as totally committed a Munster team as had ever worn the famous red jersey. From failure in London to the heights of glory at Thomond Park.

Who could have believed it before the game? After this, the mysticism surrounding the venue will grow ever greater in stature.

And what part had coach Tom Kiernan to play in this magnificent victory? Little that went before had prepared us for this fantastic Munster display. In fact, if anything, I am sure that I was not alone in thinking prior to Tuesday that the home side would be doing well to hold their famous opponents to 10 or 15 points. But Kiernan’s iron-willed determination was forged, unforgettably, in many great games in Irish colours.

That was clearly translated through to his players with the result that one would swear that every wearer of the red jersey was prepared to die for the honour of his province.

And nothing less than total commitment would have won the day for Munster.

Chiefly through the agency of Andy Haden, whose line-out display was as good as anything previously seen at Thomond Park, New Zealand won constant possession out of touch and their backs were given every opportunity to run with the ball. Not once, however, was that magnificent Munster defence breached.

Certainly it was stretched to the limit on occasions, but there was always one last defiant Munster tackle to prevent the breakthrough. Numerous times, during that dramatic second-half, one felt that the All-Blacks pressure would tell. Again and again, however, the thin line of Munster jerseys held firm.

And those twelve match winning points for Munster were so well-taken. In the 11th minute, and against the run of play, Munster went in front. But what a score it was; Jimmy Bowen, unsure with his handling in two early incidents, racing on to Ward’s delicate chip before breaking through and then turning, as he was caught from behind, to feed Cantillon who scampered gleefully over for a glorious try; Ward adding the extra points with ease.

In honesty, I doubt that any try scored previously at Thomond Park was ever received with such wild and delighted acclaim.

Even better was to follow; for the first of many occasions during the game, New Zealand were penalised for indiscriminate use of the boot in the 17th minute; Tony Ward’s kick at goal. The only one of the day, incidentally. Falling short to full-back, Brian McKechnie, who knocked-on just 5 yds. from his own line.

From the resultant scrum, Canniffe fed Ward who dropped a delightful goal. Perhaps the ball took a slight deflection off a defender as it went over.

Nine points to the good at half-time and with a historic victory in the offing, but New Zealand, with renewed ferocity, sought desperately to defend their unbeaten tour record.

Mourie was stopped near the line after a close-in scrum; a last ditch tackle from Bowen prevented Dunn going over in the corner; on three occasions, Donaldson and Dunn went away on the blind, only to have their efforts thwarted.

Still, defiant Munster did not yield and then came the clinching points in the 67th minute.

Ward’s towering kick being fumbled by Stuart Wilson, who eventually brought the ball over his line before touching down.

Taking possession from Tucker after the resultant scrum broke-up, Ward bisected the posts with his drop-kick.

On the day, this was a truly superb team display from Munster. I trust that I will be forgiven if I award special kudos to a few players.

In my book, Donal Canniffe has never played better at scrum-half; taking all the punishment that New Zealand could deliver, and still bouncing back to clear his lines with some splendid defensive kicking.

And how sweet this victory must have been for Tony Ward. Despite the array of honours garnished in his short career, the little out-half still has many critics, but he really hammered out the message of being Ireland’s number one out-half by giving a well-nigh faultless display.

On just two occasions in fact did Ward fail to find touch with his kicks; otherwise, he tormented the New Zealand defence.

Stuart Wilson in particular. with a succession of well-placed punts. After two moderate Munster Cup-Final displays on the trot, Ward well and truly laid his Thomond Park “bogey” on this occasion and the home supporters loved every minute of it.

As one who had criticised his selection, let me be the first to say that Jimmy Bowen was one of the Munster heroes.

Early on, the Cork Constitution winger fumbled two high kicks on the trot and I felt, at the time, that we were in for a ‘typical’ Bowen performance.

However, that part he played in Munster’s great try obviously helped Bowen to settle down and, thereafter, he did not put a foot astray, saving the Munster line on one noticeable occasion, when he grounded Dunn as the little Maori out-half looked as if he was going to break through.

At full-back, Larry Moloney, without reaching spectacular heights, was always safe. It was noticeable that Moloney forsook the traditional full-back role on occasions by positioning himself outside his wingers.

Obviously, this Kiernan-inspired move was intended as a counter to McKechnie coming into the line. To that end, this Munster ploy worked to perfection. On the right-wing, Moss Finn, gave a typical display of cool football allied to some fine kicking. Rarely can Bryan Williams have had such an unproductive outing.

And what about that courageous display by Seamus Dennison? As early as the 7th minute, the Garryowen centre was in the ‘wars’ when he hammered Stuart Wilson as the winger made the extra-man in a three-quarter movement; unfortunately, Dennison badly injured his shoulder in this incident, yet it was typical of the player and of Munster commitment that he should choose to carry on, and, in the process, give an outstanding exhibition of midfield tackling.

Incidentally, Mickie O’Sullivan (Cork Con) was the intended substitute if Dennison had to leave the field. I would have thought that McGann would have been a much better selection. As centre partner to Dennison, Greg Barrett confounded a few critics, myself included, by giving a first-rate display.

How does one adequately pay tribute to the performance of the Munster pack?

Conceding a stone per man in weight, the home forwards, under strong pressure, still won the ball on their own put-in. Those heels for Ward’s drop-goals being vital efforts. And if Munster were forced to concede line-out supremacy to the magnificent Andy Haden, the chasing and harrying of the entire Munster eight never allowed an All Black player to settle in possession.

How well Pat Whelan did at the front of the line-out, where he frequently broke through to get in the tackle on Donaldson.

Those two superb foot rushes from Colm Tucker, who did his National image a power of good with this, by far and away, his best display of the season; the courage of Gerry McLoughlin and Les White who never allowed props of test calibre to dominate in the scrums; the tenacity of Brendan Foley and Moss Keane in giving Haden and Frank Oliver a rare tussle in rucks and scrums; the fine wing-forward display from Christy Cantillon, who surprised us all. Yes, indeed, a pack performance to be proud of.

A historic win, then, and as totally convincing a Munster display as one could wish to see. To that much maligned bunch of gentlemen, the Munster Selectors and to the coach Tom Kiernan, in particular, our sincere compliments on motivating their players to give a performance that exceeded our wildest expectations. In years to come, 12,000 spectators will look back with pride and each of them will be happy to say “I was there”.

This piece originally appeared in 1978