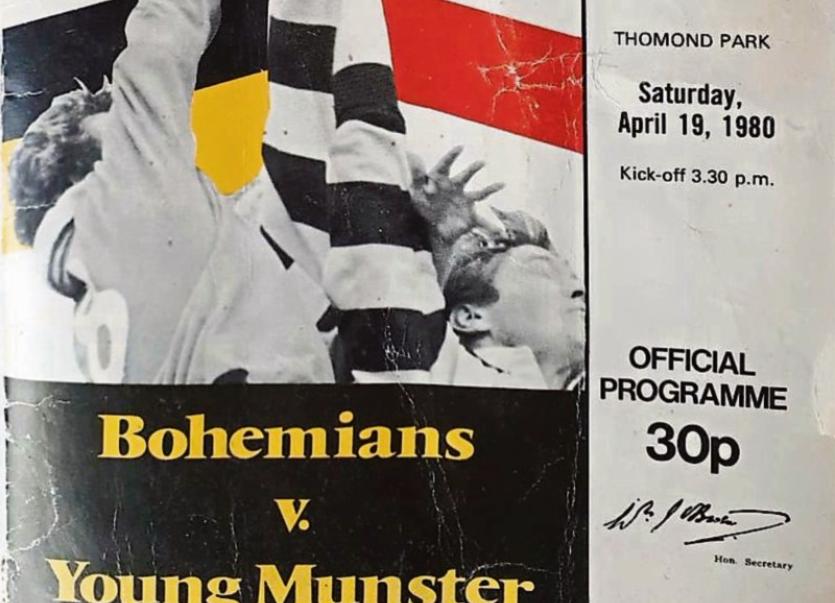 CARRIED along on a tidal wave of emotion, Young Munster, finally overcame the ‘hoodoo’, which had dogged them for 42 years by beating a gallant Bohemians side as we are ever likely to see, 9-7 in the Munster Senior Cup final at Thomond Park back in late April 1980.

Few, if any rugby supporters would begrudge ‘Munsters’ this long overdue success, but one must spare a thought for Bohemians who played their part in contributing to this memorable final by constantly driving forward at Young Munster for the entire last quarter of the game only to see their best efforts resisted by a magnificent Young Munster defence.

Only once was this defence breached in the dying minutes of the game, when Mick Wixted slipped through two tackles to score 12 yards in from the touchline.

A reply would have been on the agenda if young Steven Hennessy had managed to kick the subsequent convert, but the full back pulled his kick wide of the upright and ‘Munsters’ breathed sighs of relief. 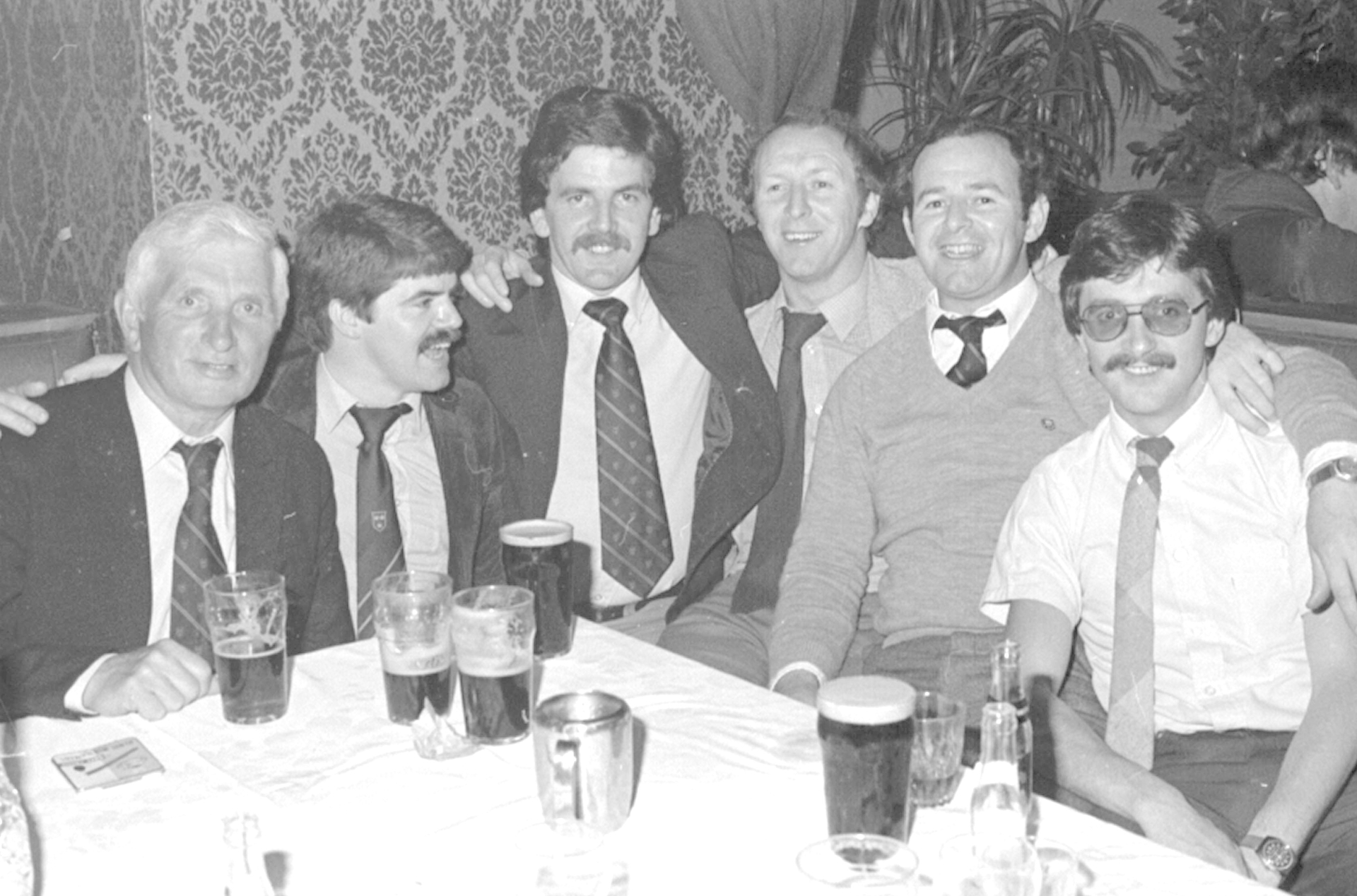 In truth, though, it hardly looked like being that close at half-time as Bohs, with the advantage of the strong breeze behind them made little use of the elements and turned over level at 3-3 at the break.

Certainly Bohs will regret the chances they missed during the opening period.

In the 5th minute a neat piece of dribbling along the touchline by Mick Murphy and Ted Sheehan saw Bohs win the throw in the corner, but the scoring chance went for nought when ‘Munsters’ won the line-out.

Two minutes later, inside the Young Munster ‘25, Bohs won a ruck but Morgan Pierce, with unmarked players outside him opted to go on his own and was well and truly ‘nailed’ by the Munsters back row.

Playing into the strong breeze it was simply a case of Young Munster defending at that stage and in the 21st minute, their back row again came to the rescue after Trevor Hensman had won a line-out near the corner.

With Tony Daly fitting in well as a replacement for Mick Murphy, who retired with a facial injury in the 19th minute, Bohs continued to press forward but they missed a golden opportunity in the 23rd minute when Stephen Hennessy pushed a reasonable penalty chance wide of the upright after Richie Daly had committed an infringement in the line-out.

Compensation came quickly for the missed penalty by Hennessy, however, when Mick Bromell’s drop-kick made it 3-0 for Bohs in the 25th minute - fed by Hennessy, after Madigan had created the ruck for Bohs.

Bromell had the option of going for the corner, but instead turned back inside and then steadied himself before putting the drop-kick over. 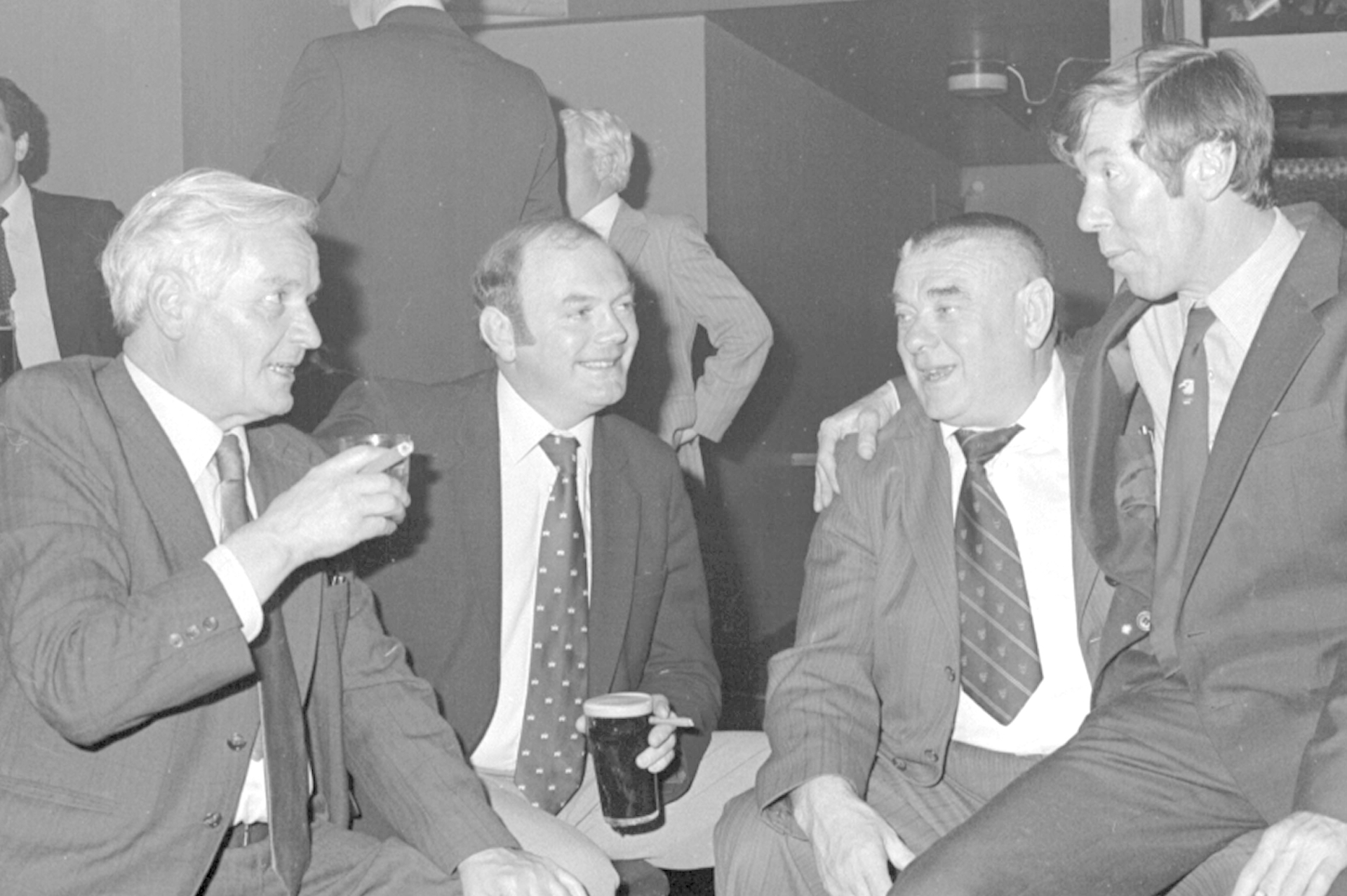 That score, at least, gave Bohs supporters something to cheer about, but their voices had hardly died down before Young Munster equalised.

Straight from the kick off, Morgan Pierse was penalised for picking the ball out of the scrum giving Gerry Casey, from 35 yards range and into the breeze, the opportunity of restoring equality with an excellent kick.

3-3 then, and the best efforts of John Madigan, so powerful at the front of the line-out, Ken Rennison and Derek Muirhead, seeming to count for little as Bohs squandered possession behind the scrum - their stereotype passing being capably dealt with by the hard tackling Young Munster three quarter line.

As the first half moved into injury time, Munsters threatened to score with one of the best attacking moves of the game. After Bohs centre, John O’Grady had knocked on with referee Mick Reddan playing the advantage to perfection, Gerry Casey cut through before linking up with Francis Brosnahan, in turn the big centre parted to Derek McCarthy, before taking the return pass and driving forward to create the ruck.

When the ball came back Eamonn Madden, with his entire three quarter line unmarked to his right, squandered the opportunity by opting to put his head down and go it alone.

Even if Munsters failed to take that try scoring chance their supporters were a confident bunch at the interval as they had seen their team deal easily with what Bohs had to offer.

With the advantage of the elements after the interval, it seemed that the black and amber side were in a commanding position and when they made the score 9-3 just six minutes into the second half, even the most committed Bohs supporters must have felt that their team was in for a hammering.

Munsters scored when Eddie Costelloe robbed Morgan Pierse at the base of the Bohs scrum and then linking up with Pat Cross who darted through before finding Francis Brosnahan with his pass.

For a moment, it looked as if the big centre would force his way over, but weight of numbers stopped him just short of the line. With Munsters holding the initial Bohs push at the resultant scrum, Mick Sheehan was able to pick-up and go through a tackle before diving over just 5 yards to the left of the posts. Gerry Casey added the extra points with ease.

Now on the retreat after their early scoring burst after the interval had threatened to swing the game inexorably in their direction, Young Munster were forced to defend desperately as Bohs threw everything at them.

With the game moving into the final stages Bohs enjoyed a 10 minute spell when they were practically camped inside the Young Munster ‘25’.

From a short free Rennison was nearly in, but the danger was averted as the Munsters' forwards came across in numbers to seal off the gap.

Minutes later, Ted Sheehan’s pass sent Tony Daly over, but referee, Reddan, was perfectly positioned to see that this pass was forward.

And John Madigan, had no luck either as, like Rennison, he attempted to drive his way over after taking possession from a short-free.

It was heady stuff, with Bohs attacking continually and Young Munster defending superbly.

The sustained Bohs assault ended in the 40th minute when out-half, Wixted, knocked-on and Mick Sheehan drove Munsters deep into the Bohs half with a powerful ground kick.

It appeared to be the final move in a contest of stirring drama, but more was yet to come. With the game moving into injury time, Bruce Barron was sent away down the right with the Bohs winger getting in his kick ahead as he was about to be tackled by Derek McCarthy.

For once Ger McNamara found himself in trouble as Barron was up quickly to get in his tackle but the danger seemed over when the full-back parted to Brosnahan on his left - not so, however, as referee Reddan ruled the pass forward.

With Bohs winning the subsequent scrum, Wixted was able to take the pass from Pearse in his stride before getting past attempted tackles by Sheehan and Daly and diving over.

The enviable task of restoring equality then lay with young Stephen Hennessy - it is now part of history that he pulled his kick wide of the post.

A famous victory for Young Munster, then, and one which owed much to their traditional fire and character as they defended so superbly for much of the second half.

A marvellous result also for Tony Grant, Mick O’Callaghan and all the Greenfields mentors who avidly pursed a youth policy over the years - this success is a fitting reward for their efforts.

On the black and amber side you Ger McNamara was impeccable at full-back. At the sake of repeating ourselves, Eddie Costelloe was, once again, an excellent cup scrum-half.

In the centre, Francis Brosnahan calmly dealt with some messy situations. Up front Johnny Murphy and Pat McGrath did their bit as they succeeded in taking the only two against the ‘heads’ of the day.

Appearing in his third cup final Richie Daly, at last figured in the winning side - and many local supporters will rejoice that the whole hearted forward has gained some tangible reward for his efforts over the years.

Out of bounds for much of the season, Mick Sheehan, more than most will have special reason to celebrate this success.

On the Bohs side, long serving veteran John Madigan was a tower of strength at the front of the line out where he won excellent possession.

If anything Madigan was only marginally ahead of Ken Rennison - how the marvellous character would have celebrated a Munster Cup victory.

In the back row, Derek Muirhead was always in the thick of things - really nothing more could have been asked of this Bohemians pack as they gave everything they had in pursuit of victory.

Behind the scrum, Peter Rolls with some stirring runs, tried all he knew in the dying minutes to wrest the game Bohs way. Defeat, inevitably, will bring its share of disappointments to the Bohemian players, but their contribution to this memorable game was such that they can proudly hold their heads high - the way they played, defeat was no disgrace.