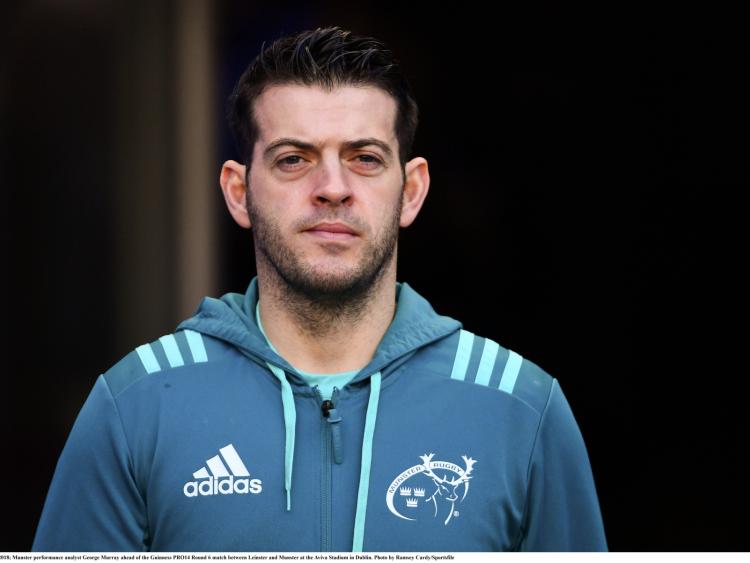 The Munster squad are now on a down week and they will have completed the initial eight-week block of their remote training schedule by Friday. While the Munster coaches and team support staff have continued to work with the squad and organise for the weeks and months ahead, the lack of games has provided the opportunity to upskill in recent weeks.

Lead Performance Analyst George Murray has been keen to use the time wisely and talked us through a number of different initiatives that have taken place.

“This period has been unbelievable for being able to sit back and see how you can develop yourself as a person and how you can develop practices,” said George. “The nature of being involved in professional sport is you’re always trying to improve yourself.

“The fact that we’ve got so many hours in the day to constantly think about that is so refreshing and you’re picking up little things.”

One of the more inventive ideas saw the coaches recently take part in a workshop with professional storyteller Clare Muireann Murphy.

Speaking about the one-off session, George said: “We are doing lots of CPD [Continuous Personal Development] and talking to different sporting organisations and different rugby organisations, and just wanted to go outside the box.

“We’re just looking at different ways of learning and how you can use different people to give you an insight in their industry and how they educate people in different ways.

“Somebody we came across was Clare Muireann Murphy, who’s a professional storyteller. Clare works with the British theatrical society and also works with different scientific groups and NASA.

“In particular, we wanted to focus in on how she works with NASA – largely it was based around scientists having all these amazing ideas and different things they want to implement, but not being the best at getting it across to different audiences.

“We, obviously, as a sporting organisation talk to the players a lot and help them remember the most important messages going into a game.

“We probably don’t think about how we do it enough. It was helpful to see how we can develop ourselves as speakers to help many different personalities to remember the most important messages.”

Staff have also spoken to Brisbane Broncos Head of Performance Paul Devlin recently. Devlin played for Munster between 2004 and 2006 and has been preparing the Broncos for a return to action this month.

Murray says: “We had a meeting with Australian Rugby League side Brisbane Broncos and ex-Munster player Paul Devlin in the last couple of days. They are planning a return to play in the next two weeks in the NRL, so we were picking their brains about how they’ve interacted with the squad through the technology available and how they have motivated their players.

“We also spoke about how they’ve used different types of drills and exercises when training as individuals from home to keep themselves physically ready to come back to play.

“We’re a little bit away from that from a time point of view, but there are teams that are ready to go back in two weeks, so learning from their experiences and how they’ve best dealt with the challenge.

“They were back in the gym last week and had multiple players getting personal bests around different things so it was great to learn from what they’ve experienced and implement that immediately.

“It’s been really, really beneficial for us.”

Regarding the communication from the coaches and support staff to the squad over the past seven weeks, the senior squad and Academy members have been completely aligned.

George said: “We’ve been using Microsoft Teams and we’ve been using Huddle for our presentations. There have been lots of little projects for the players, and the senior guys and the Academy players are all aligned and in this together.

“They’re doing small projects around profiling, looking at players that have a similar skill set to them and what they want to learn off that type of player.

“Similarly, the coaches have been interacting with the players, learning more about our game and where we want to bring our game going forward.

“I think that’s refreshing for the players without overloading them because there are lots of things to be done in the day and you need to step away from it.

“We just touch base with them once or twice a week online, have a little bit of interactive video work and it gives them a buy-in into the process.”