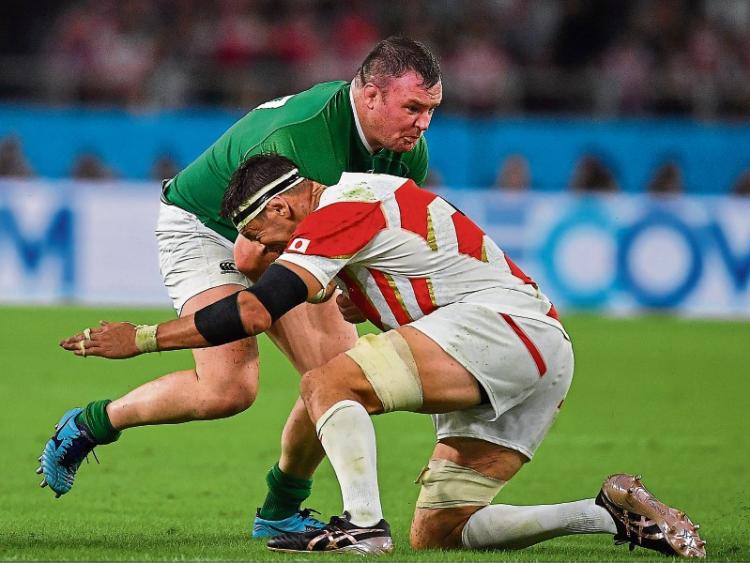 IRELAND international Dave Kilcoyne turns 32 this December. The UL Bohemian prop made his debut for Ireland in 2012, winning eight caps that season.

Five full seasons later, he had won a further 14. In the last two seasons, a resurgence in form has seen him win 17, almost half his career total of 39, including a trip to Japan for a World Cup.

“At the end of the day it is up to the coaches whether they want to pick you or not. When I broke into the Ireland camp originally, I played in the Autumn series and the Six Nations under Joe Schmidt’s campaign” Kilcoyne stated when speaking to Leader Sport this week from his home.

“The following seasons, I wasn’t in the squad as much as I would have liked to have been, but at the end of every season, you assess where you and your game are. I did that.

“I was trying to knock down that door and force his (Joe Schmidt) hand until he had to pick me. I take pride in the fact that my resilience eventually worked out and I pushed my way back in. By the end of Joe’s tenure I was mostly on the match day 23. You have to take confidence from that.”

Indeed the loosehead prop was arguably having the best season of his career in 2019/20 before Covid-19 hit.

The 182 times capped Munster forward has signed a new three-year contract with Munster through until the summer of 2023.

Johann van Graan, Stephen Larkham and Graham Rowntree were all in favour of keeping the live wire prop on their roster, seeing as Kilcoyne has fitted seamlessly into Munster's new gameplan.

“I have always played the game the same really.” added Kilcoyne on this season's form.

“When you go back to the days when Rob Penney was here, we had forwards carrying in the middle of the pitch. I like that system. It was the same one Connacht used to win the PRO12. I think that is something we have here now. We have good ball carriers and off loaders.

“Our coaches want us to off load the ball to create space for other players too. That is an aspect of the game that Andy Farrell wants too and thankfully, that is something I can bring to the table.

“You have to work on your weaknesses, but the other side of that is to make sure you focus on what made you strong in the first place.” admitted the former Ardscoil Ris schools star.

With Kilcoyne almost certain to join Munster's ‘200 appearances club’ the forward looks to his parents as the inspiration behind his work ethic.

“My Mum Pauline and my Dad Pat would have taken great pride in my rugby over the years going to games and stuff, but they also have the same pride for my brother Padraig and Alan.

“One is a pharmacist and the other is a school principal. My parents have always instilled in me, a serious work ethic. You looked at them getting up at 6am etc and working all day. My Mum works in the Regional Hospital in Limerick and that is something that is coming in for loads of attention at the moment, in the current situation. All of that can only make you aware that hard work pays off. We are lucky, we have that sense since a young age”

Days on lockdown can be tough for all and it is no different for professional rugby players who are used to social interaction and ‘contact’ with others more than any other job. So, how has the lockdown been treating Kilcoyne?

“We are all just digging in and getting through it. We have some gym equipment, which Munster Rugby gave us from their gym. I have some of my own equipment and I have always had a set up for weights in the house.

“In terms of training, we have a schedule sent to us from Munster every week. There are sessions there that need to be done. I try to get my running done in the morning. I do my weights in the afternoon then once you have got some nutrition and some rest in. It is vital to have that right before weight training.”

Kilcoyne, who was in Ireland camp at the time that the lockdown and postponement of games was announced, added that Munster have used this 'window' to reintegrate the internationals into the system and style of play.

“We have had some video calls with the coaches this week. That sharpens the mind. We have had some good sessions there and more again to come this week. Stephen Larkham and Graham Rowntree have been able to go back over a lot of our detail. Just to keep us up to speed.

“There is detail there around plays, lineouts, how we want to play. So that is good to get that side of it boxed off too. There was a session too with the international lads, who were away for the Six Nations. That group managed to refresh their memories on the Munster side of game plans as the Coronavirus had hit while we were in Irish camp.

“ We have rugby balls here too, so we have challenges from the coaches too during the week, so they keep the eye in and the touch going. Its like every walk of life, it’s about making the best of what you can do with what you have”

In recent times some media focus has turned to the ‘lack’ of Limerick rugby talent coming through the system. Kilcoyne, who is rehabbing a rotator cuff injury he picked up against England in the Six Nations, believes that the competitive nature of the current global rugby game is making it harder and harder for anyone to come through, but believes Limerick is punching above its weight still.

“If you look at Craig Casey, if he wants to be a regular starter here, he has to push another Limerick man out of his position. Conor Murray is the starting nine for the Lions. It is extremely competitive, across all aspects of the game.”

The future of Limerick rugby talent might be best advised to look at the man who has done it himself.

From Ardscoil Ris, to UL Bohs, to Munster to Ireland, one thing Kilcoyne brings is effort.