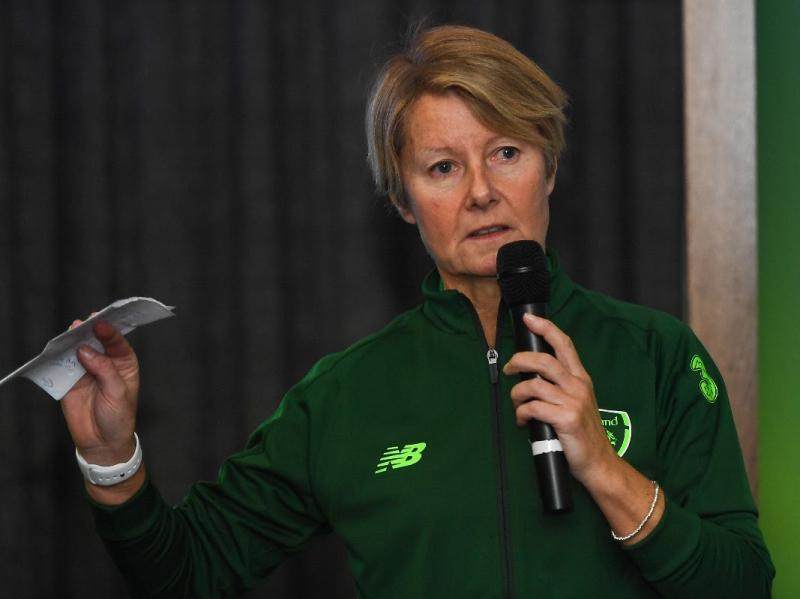 What is the one key attribute you need as a coach?
There’s more than one, the obvious one being you need to have a good knowledge of the game.  But apart from that I’d say being a good communicator and a good motivator are two key attributes for coaching any sport. If you’re working with young players you need to be able to communicate with them, explain clearly what you want, encourage them & obviously motivate them.

When working with an adult team, especially at national level, it’s all about achieving results so you’re shaping the team for competition.  But you’re also more than likely working with a backroom team, so communication and motivation are huge in both respects.

What is your favourite thing about the job?
In my current role I would say developing young players and facilitating their progress to the next level.  Watching a player you’ve coached improve and take the next step on their pathway is very rewarding, so ultimately it’s my job to create an environment where they can be the best they can. If they make it to the next stage of their career then you’ve done your job.

Any pre-match rituals?
More so when I was with the women’s senior team, I would always play the same song on the way to the stadium, and I would always make sure I was the first person off the bus. I am a bit superstitious so being the first off the bus and into the dressing room was always important to me.

What one message would you give to a player to keep with them throughout their career?
Always work hard at your game. Even if you think you’ve made it, continue to work hard and also use any set-back you may face as a motivator to improve.

Which coach/manager – from any sport – have you taken your greatest inspiration from?
I’m a big Arsenal fan so Arsene Wenger would be a big inspiration. It was his calmness I admired as well as the fact he was so innovative when he first went to Arsenal,introducing new methods to training and his team’s played such good football. He changed the whole culture of football in England and managed to get players who were in the twilight of their careers to buy into his methods. I think he created a legacy for the game in general.

Favourite match you coached and why?
Two games stick out for me.

The first was when I was with the U19s and we needed to beat Yugoslavia to progress to the Elite Phase of the Euros. It was 2-2 and we were pushing for a winner but around the 88th minute Yugoslavia hit us on a counter attack and had a one-versus-one with our keeper.  I was shouting for her not to let the player go by her, but she unfortunately committed a foul inside the box to give away a penalty and at that late stage in the game we thought we were out. However she saved the penalty and played a quick ball up field from which and we get a corner. Susan Byrne scored from the corner in something like the 93rd minute and my celebration took me to the centre circle!

The other was with the senior team when we played Germany in 2015. They were definitely the best team in Europe at the time. They came to Tallaght Stadium as favourites in the group, we took the lead through Louise Quinn after one of Megan Campbell’s trademark long throws. Mid-way through the second half they got a penalty out of nothing to make it 1-1. About 10 minutes later they scored a second. However, we regrouped and equalised in the 89th minute when Stephanie Roche got on another Campbell throw.

We thought we had secured a point, which as I said, was so unusual to get from Germany, however there was another twist to come in the game.  It was a really windy day and deep into injury time we conceded a corner which was whipped in after initially being played short.  Unfortunately for us the wind caught it and it ended up going over our goalkeeper’s head and in at the far post. We lost a game 3-2 which no-one was expecting us to get anything from, but we very nearly got a fantastic result.

What team or match from any era do you wish you could have coached?
I used to play hockey quite a lot and at a high standard but I had to give it up when I began playing football for the women’s national team. I’ve always loved hockey so would have loved to have been involved with the Irish Hockey Team who won silver at the 2018 World Cup in London. I’ve never coached hockey, and I’m not saying I could, but I would love to have been involved for that tournament because the whole journey for that team was just magical.