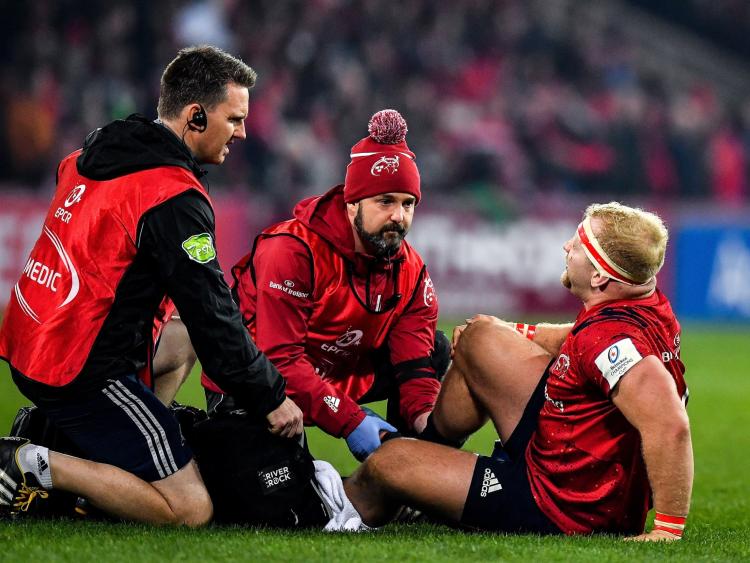 The Munster Rugby squad have started their third week of remote training. The squad will complete this four-week block with another down week next week in providing an opportunity for players to switch off, and break up the home training schedule which currently runs until mid-May.

Speaking about how the squad are dealing with the current situation, Head of Medical Dr. Jamie Kearns added: “We’re in a very privileged position and the guys all recognise that. They see the importance of what’s going on externally while they maintain their focus on what their job is and how important is it for them to be fit and ready for when the season hopefully starts again.

“We’re lucky to be able to do that and we’ve a really dedicated team behind us in our athletic performance and physiotherapy teams who are all very focused on making the best of the situation.

“There’s a 100% buy-in from the players and they have been brilliant.

“We’ve devised a system within the club and have split players into groups so that individuals are in smaller groupings and are monitored by a designated individual from a medical, coaching and S&C point of view. All remotely of course.

“That creates a sense of bond between people so they don’t feel isolated because I think that’s one of the big challenges in such a unique situation where people are confined to their home.

“The importance of staying connected with people, you can’t emphasise that enough. The sense of community and sense of team is so important.

“The two things for me that are really important from a mental health point of view is to have a purpose and to stay connected. We wanted the guys to maintain a routine and have a stable sleep schedule so they can hopefully use this time to develop physically and skills wise.

“A lot of our squad have young kids and babies so it has been great for them. In this environment, you’re away from home an awful lot, away from their houses travelling with games – especially for that 6 Nations group.

“They now have time to be at home and spend time with their family and I think that is really important and very beneficial.”

In terms of managing players with rehabilitation programmes, Kearns adds: “Thankfully, the majority of those guys were very close to getting back to play and were going through the final stages of being re-introduced to training, and from that point of view, there were very few guys who actually needed hands-on treatment.

“Different exercise prescriptions, different rehab exercises that the guys have been given from the physiotherapists – that’s all been done remotely or via video call and it’s actually worked very well so far.

For the coming weeks, Jamie will also be working in the Emergency department at his home city in University Hospital Galway.

Jamie said: “I was very lucky, I spoke to Munster and they were very supportive of my desire to go back and try and help out locally. I worked in the Emergency department  in Galway for a number of years so I’d know a lot of the staff there very well and knew there was a need to get extra staff in. Both to cope with the number of people coming in but also the fact that a quarter of the people who get the infection are health care workers and then the number of people who have to go into isolation because of the infection or being exposed.

“With Munster’s support it’s something I feel privileged to go back and do and I feel lucky that I’m in that situation because I feel for a number of people at the minute, when it’s such an uncertain time and you don’t know what’s coming down the road, having the ability to affect some sort of change is a real positive. It allows me the opportunity to go in and contribute something to the work that so many people are doing in the hospital.

“There’s a number of doctors, nurses, healthcare assistants, cleaners – I don’t think people see that, the people who come in for not a huge amount of money to make this sacrifice in what is a very high risk environment. I think it’s important that all those people are recognised for what they do.

“From a society point of view, what I think has happened in a horrible set of circumstances is that we’ve brought focus on something that is so important and maybe has been neglected for a long number of years which is our health and the service that is there for people when they aren’t well, that we provide a really good service.

“I think that’s being highlighted in terms of the people who go in working there, they’re doing that all the time anyway. I think it’s just now in this crisis that people see what they’re doing and I think it’s really important that we put a huge value on that as a society.

“From a community point of view, sport brings people together, it gives people something to focus on and bond over. From everyone I’ve talked to, it’s the same in the health service now where everyone feels like a team trying to fight towards a purpose.”