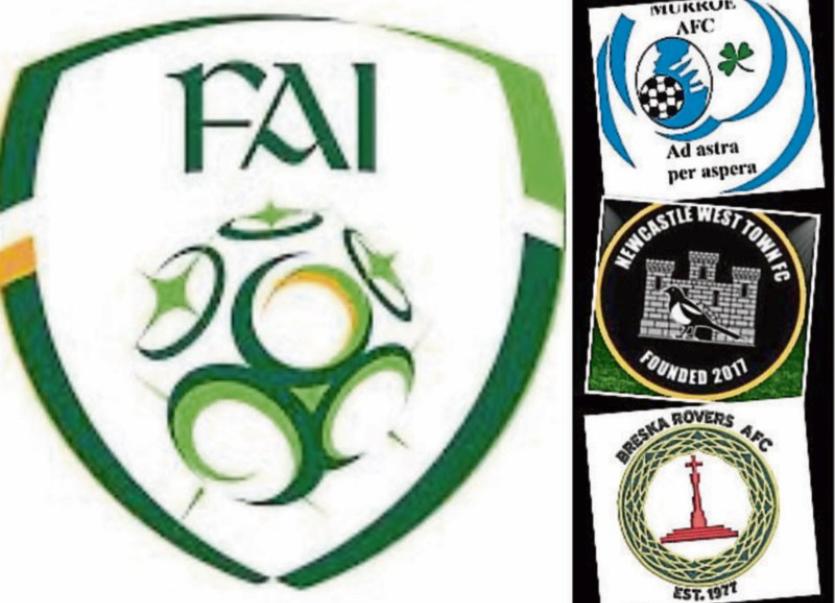 THE majority of the nation may be staying at home for the moment, but that does not mean sport has completely come to a halt.

This week, three Limerick soccer clubs have received news that they are to be awarded the FAI Club Mark.

The FAI Club Mark is an award based on best practice in the governance, management and administration of a football club. Clubs start their journey at Entry Level, and can progress on to become a 1 star club. Each step challenges the club to implement policies and procedures in line with best practice.

Limerick's Murroe AFC, Breska Rovers and Newcastle West Town have this week all been awarded a Mark by the governing body.

Murroe AFC, now in its 52nd year of existence has recently been awarded the FAI Club Mark in recognition of the strides the club has taken over the years, and its commitment to the highest standards in coaching and administration in their running of the club.

Speaking to the Limerick Leader this week, Murroe AFC's Don O'Malley admitted that the club had looked back, to look forward.

“When we celebrated our 50th anniversary in 2018 it was a time to look back fondly over the years, but also a time to look forward and take stock, and set our minds on where we could improve the club heading into the 2020’s.

“With a vast array of teams involved in the club playing at all age levels from 5 or 6 years of age up to 40 and 50+ Murroe AFC has over 200 members.

“ Three Adult Mens teams, one Adult Women’s team, and underage teams at various age levels from the smaller kids up to U-18’s, its a sizeable undertaking to administer, organise coaching and fundraising activities for”

Behind every good club is a good committee and that is something O'Malley confirmed was the same for Murroe.

“The current committee, chaired by Jimmy Quinn, have brought the club to the stage now where all coaches have the recognised coaching courses completed, along with the required child welfare courses too.

“This is a far cry from only a short number of years ago when things were run in clubs around the country in a much more amateurish haphazard kind of way.

“These days things are run on a much more professional basis by the volunteers and this award is a recognition of that effort from the national governing body to the current committee and the committees and coaches from previous years back through the clubs history who have paved the way for the club we have in Murroe today.

“With only a few clubs in County Limerick having been awarded the Club Mark at this point, and less than 30 nationally, this goes to show the fine job that’s being done by the committee and coaches in Murroe AFC, along with the help of the parents and wider community of supporters and sponsors in the locality.

“Well done to all and here’s to a time when we’ll be back on the pitches in Tubber and around the County again and the Covid-19 Virus will be just a memory.” O'Malley concluded.

The next Limerick club to be honoured this week were Breska Rovers who received a Club Mark Entry Level award.

Rovers, formed in 1977, join Broadford United and Ballingarry as Desmond League sides to receive this mark.

There are 34 coaches, just over 300 players and 14 teams in the Clarina based club, all with just one pitch, for the moment, as they develop another on site.

Club PRO Tom Clancy said “We are delighted to receive this recognition from the FAI.”

“It signals that the club are heading in the right direction. I'm delighted for all the coaches, volunteers and players. Every member is important and hopefully this is the start of even better things for the club. This sets a standard within our club and I hope we can continue improve all aspects of our club.

“In recent years our numbers have swelled, particularly at underage where we are now fielding teams at all underage levels. In addition, we have two mens and a ladies side at adult level.

“We recently received a Sports Capital Grant of €45,000. This is to develop an underage pitch and works have been halted with the current crisis. Facilities have been strained due to the volume of players but it is a fantastic problem to have. This is our biggest challenge to date.

“We are conscious with Covid-19 that football takes a back seat, however, this award gives the club a boost and hopefully when we do get back onto the pitch we can hit the ground running.

“We're proud of our history - we're going since 1977 - and we hope to continue our growth in the coming years. We can achieve this by continuing to work with parents, players, our sponsors, the local community, Desmond League, the FAI and other parties.”

The third Limerick club to be celebrating this week were Newcastle West Town. (More on their win next week)

One man who has worked closely with the clubs is the FAI's Barry McGann.

“I try to encourage and support clubs in my area through meetings and consultations to get this award for their club, there is a lot of work involved to attain the FAI Club Mark, but it is attainable.

“If clubs already have their house in order they could be over the line in three to four months, as proved by Broadford United and Breska Rovers.”

Rundown of the Limerick Award winners.

Herbertstown: was the first club in Limerick and 8th in Ireland

Ballingarry: 2nd in Limerick and 12th in Ireland,

Broadford: 3rd in Limerick and 18th in Ireland,

Murroe: 4th in Limerick and 30th in Ireland,

Breska: 5th in Limerick and 31st in Ireland,

Newcastle West Town: the 6th club in Limerick and the 32nd in Ireland.