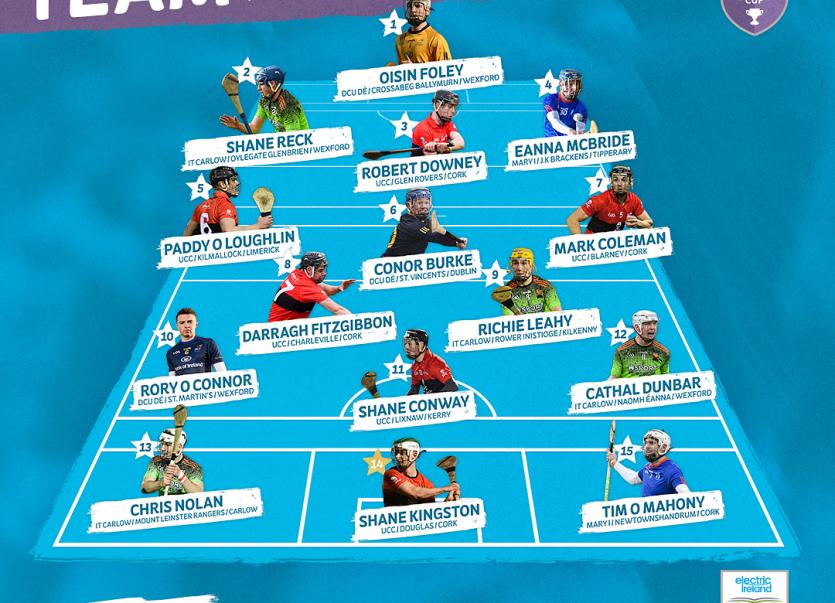 Following the defence of their Electric Ireland Fitzgibbon crown, UCC dominate this year’s Team of the Year with no fewer than seven Rising Star representatives, including their captain and Limerick Senior hurling panelist Paddy O'Loughlin of Kilmallock.

Following their impressive run to the final, IT Carlow have four representatives on this year’s team. Beaten semi-finalists, DCU DÉ and Mary Immaculate College make up the rest of the team with three and two representatives respectively.

Both organisations remain committed to celebrate some of the most consistent performers throughout the 2020 competitions, many of whom are the GAA’s brightest Rising Stars as well as recognising the Player of the Year.

Shane Kingston, a member of Cork’s Senior Hurling team, was named in last year’s Electric Ireland Higher Education GAA Rising Stars Hurling Team of the Year and continued his terrific form in the competition in 2020. The Douglas club man was a consistent threat to opposition teams and scored four great points in the Electric Ireland Fitzgibbon Cup Final as he claimed his second Fitzgibbon Cup medal and this year’s Electric Ireland Higher Education GAA Rising Star Hurling Player of the Year title.

Marguerite Sayers, Executive Director, Electric Ireland, commented “We are happy to announce the Electric Ireland Higher Education GAA Rising Stars 2020 Hurling Team of the Year. While  it is unfortunate that due to the on-going Covid-19 pandemic we will not be able to recognise the players through the annual Electric Ireland GAA Higher Education Rising Stars Awards Ceremony, the health and well-being of the players and their families is the top priority for both ourselves as sponsors and the GAA. We remain determined to spotlight 15 standout performances in these highly coveted competitions. 2020 was another thrilling season and it’s a pleasure to be able to support these players as they combine their studies with life on and off the pitch.”

Uachtarán CLG John Horan said “I would like to congratulate Shane Kingston and the Electric Ireland Higher Education GAA Rising Stars Hurling Team of The Year 2020 on their incredible achievements during 2020 Higher Education Hurling season.Due to the Covid-19 pandemic, we will not be able to honour these young men in front of their families, friends and coaches, however, they should all be very proud of what they have done in 2020. They are a credit to their club, county and most importantly, their third-level institution.”