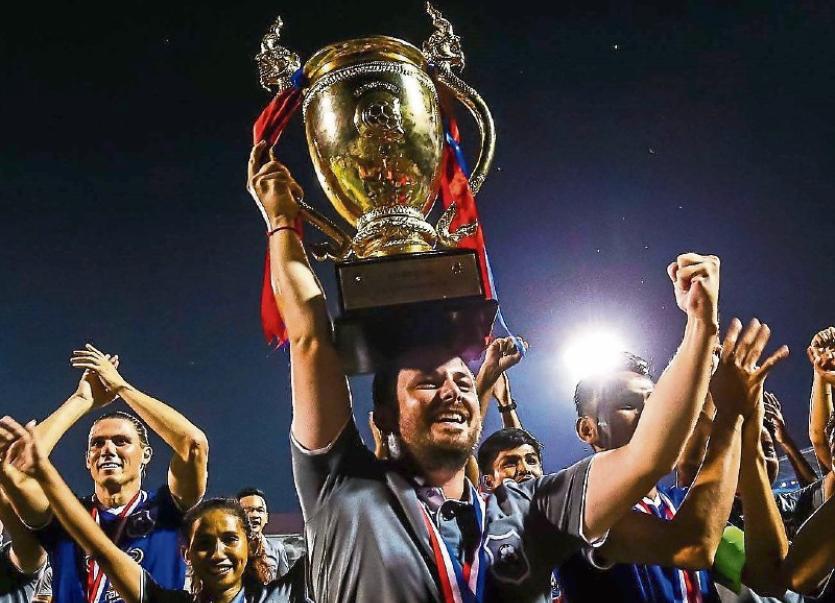 LIMERICK man Conor Nestor is head coach with Cambodian Premier Division soccer champions Preah Khan Reach Svay Rieng. Nestor’s two-year stint in Cambodian football has been something of a whirlwind. The Foynes man’s success of winning the league as a manager now followed by the disruption of the coronavirus pandemic.

When did the coronavirus start to impact on Cambodian life?

Conor Nestor: “Actually I think we are maybe a week behind Ireland in terms of the virus. In the last week we have seen an escalation in cases (84 confirmed cases earlier this week) and the border to Vietnam has just been shut which is significant as relations with Vietnam and Cambodia are quite good.

“Schools have been shut for two weeks in Siem Reap the second city and for several days now nationwide.

“Many businesses have told staff to work from home.

“In terms of football I have cancelled training and the league been postponed until further notice. All games in April are off. Time will tell if we end up doing what they have been doing in Vietnam which is play behind closed doors.”

In happier times, what was the aftermath of winning the Cambodian League with Preah Khan Reach Svay Rieng FC like?

CN: “Our supporters, along with our players and staff, enjoyed the celebrations for sure but from my perspective I can sense the hunger for more success. The Cup final defeat and just losing out on an unbeaten season has left us with enough pain to encourage further effort.

“The big thing for me was getting to go home to Limerick, I got to catch up with friends and family and recharge the batteries for a new season.”

You get to play in the Asian Football Confederation Cup (AFC) as a result of winning the league title in Cambodia?

CN: “It’s the equivalent to the Europa League back in Europe. In Asia only the top 10 nations are guaranteed Champions League spots and many countries like Cambodia don’t meet licensing requirements so there is no route to the Champions League for us.

“We had to win a play off over two legs with the second best team in Laos called Master 7. We ended up winning 7-1 on aggregate which was fantastic.

“Now we are half way through the AFC Group stage with two loses, but one win against Bali United a side who play in front of 25,000 fans every week and have a budget seven times our size.

“The task of winning games at this level would be similar to a League of Ireland team playing in the group stages of the Europa League. We are up against superior financed clubs and perhaps just superior in general but we are giving it a crack.”

How would you look on your league form, 13 points from a possible 15,  before the games were halted due to the coronavirus?

CN: “We haven’t found our rhythm yet, but with the task of three games a week due to the AFC Cup, I am very happy with how professional our players have been.

“Our home games in the league have been averaging attendances of 1500. None of our main rivals have come to town yet.

“Our AFC Cup games are being held at the Olympic Stadium in Phnom Penh, where we have got between 3,000 and 4,000 in our games to date.”

How have you adapted to the Cambodian culture and the way of life?

CN: “I like it here, the people are friendly, happy go lucky and respectful. The rush hour traffic is an obstacle I am still adjusting to!

“Temperature-wise, it's 37 degrees at the moment. We train every morning at 7am which helps a little, but by 10am its 30-35 degrees. Nine months of the year its dry and sunny, anything from 30-40 degrees and then for three months its rainy season.

“Unfortunately some clubs don’t have floodlights, so when we play in some away venues its 3.30pm and the sun is splitting the rocks.

It’s madness and I am working with the league here to try and find a solution to the floodlight issue.”

Are there any other Irish people involved in the club at present?

CN: “I had a Cork man Conor Wall translating for me in my first year here. Conor helped run the club to be fair and was key in our analysis department.

“Conor was a photographer before I asked him to take a job with me, now he has gone back to that and he has a lot less stress.

“Professional football isn’t always as fun as it looks and from his perspective I think taking orders from a Limerick man was tough!

“He runs the local GAA team here and its a flying success. But apart from the GAA club and the odd Irish bar there isn’t much other signs of Ireland here.”

Given your association with the club, how disappointing is it that Limerick doesn’t have a team playing at senior level in the SSE Airtricity League in 2020?

“Lets hope it’s only for one year and we see the supporters who have supported the club through thick and thin back at the Markets Field getting behind a new and improved era in Limerick and hopefully the league as a whole.”

How long more has your contract in Cambodia to run?