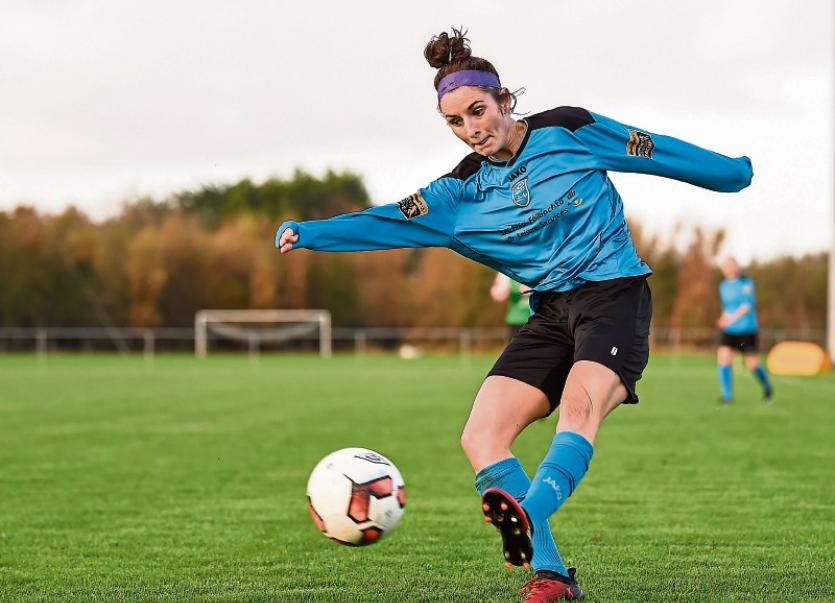 The Women’s National League kicks into action, when sport returns, for a tenth instalment. Though local side Treaty United are not in action until the second weekend of the season, the other eight sides begin their season in earnest.

Catherine Cronin is set to captain DLR Waves against Wexford Youths. The Castletroy native has plenty of experience, having featured regularly since the formation of the league in 2011.

The winger spoke to Tom Clancy about her experiences in the game to date, her role as captain of the south Dublin side and gave her thoughts on the progression within the league.

With the lengthy winter break now over, Graham Kelly’s DLR Waves are ready for 2020, with Cronin captain for a second season.

“Preparation is going very well – we’re back in the last six or seven weeks. We have four or five new players, so the squad is coming together nicely. We have a lot of younger girls coming through.”

While captaincy has burdened players in the past, it seems to be a role she enjoys, one where she will look to lead by example with.

“I’m one of the older girls in the squad and even across the league. I’ve learned a lot from the likes of Aine O’Gorman and Karen Duggan, from playing with and against those types of players I’ve learned loads. As captain I feel I’ve an important role to support young girls who’re breaking into the squad, to help them have confidence and to be a pillar of strength, if I can for them. I try to show my experience, try to be calm and reassure everybody. I try to be a role model, within the team, to show them the right way to go about things.”

Finishing sixth in 2019 is clearly something that the 28-year-old nurse doesn’t want to get used to but she is realistic about the situation DLR Waves find themselves.

“The top three teams, Peamount, Shelbourne and Wexford are very strong. But I feel that we should have done a lot better in a few games, last season. I think that it is a good base for 2020, and I’m hoping we can kick on and challenge as best we can. It (2019) was definitely something to build on. It was Graham’s first season with any women’s team. It was a disappointing finish but the younger girls have stepped up a bit during pre-season training so hopefully we can learn from last season.”

There has been a reduction in league games, from 21 to 16, something that the former Aisling Annacotty star sees some merit in.

“Last season, we played everybody three times, so this reduces the amount of travel. We will have fewer matches from a development point of view, teams may prefer to play more matches but it is probably more even playing everybody home and away just once”.

“Having two new teams is a good move. Kilkenny have been removed so it is hard to tell what is more beneficial at the moment. Kilkenny were on a building plan of 5-7 years and they feel they didn’t get a fair crack to develop that fully”.

While the FAI will take flack for some of the issues within the league in recent seasons, Cronin acknowledges that each club needs to improve their own standards, to help avoid one-sided games which have been frequent in recent seasons.

“Every team needs to focus on themselves, by improving their strength and conditioning, their fitness, for example. Each club has to take responsibility for (one-sided) results. We were very unhappy with the Peamount game last year (lost 8-0), but we’ve to take ownership and ensure it doesn’t happen again”.

The increased interest and support given to the Women’s National Team hasn’t been mirrored in the national league but Cronin is delighted with the progress seen by The Girls in Green.

“Since they went on strike with the PFAI I feel the national setup has improved and we’ve seen a lot of players move to professional clubs in England. There has been a lot of improvements around the national team, with 4,511 at the game against Greece last week.

“There is still a long way to go (for the league), but this is supposed to be the top level of football in the country. Things definitely have to improve, such as the exposure of all the games, the marketing of the league, there is a lot of room for improvement but I think there has been progress”, she explained.

“The league starts this week, and we are still waiting for a title sponsor. We are hoping with the 20x20 campaign this will be a big year and we will see improvements. The marketing and promotion seems to be big around the FAI Cup Final but there isn’t a huge amount around the league during the rest of the season”.

Overall, Cronin is happy with the league and optimistic for the future, she is clearly enjoying playing at this level and is proud of her past experiences.

She won back-to-back league titles with Raheny in 2012/13 and 2013/14. Subsequently she scored a crucial goal in the UEFA Champions League, helping the ‘Pandas’ to a 2-1 victory over Hibernians of Malta.

DLR Waves were to travel to Wexford Youths this Saturday, one of four WNL games scheduled for the opening round of the season, now cancelled due to the Coronavirus.