First silverware of Limerick soccer season on offer this weekend 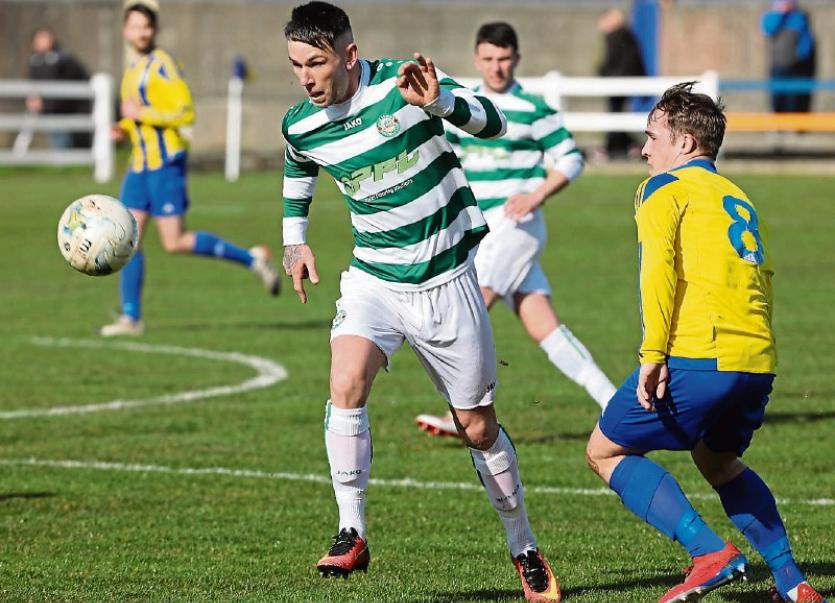 The first silverware of the season will be presented on Friday evening when Ballynanty Rovers cross swords with Fairview Rgs in the final of the Jack Tuohy Cup at 7pm in Jackman Park.

Fairview go into the tie as favourites if for no other reason than beating Pike Rvs thrice over the last few weeks. A 1-0 win in the Munster Junior Cup last Sunday was their latest success.

With Steven Bradley at the peak of his game few teams get the better of Fairview in the middle of the park. A solid back line and keeper are complemented at the other end of the field by the form of Robbie Kelleher and Ross Mann.

They take on a Balla side fresh from an 8-4 win over Kilmallock. As the scoreline suggests the Blues will be happy with their scoring form but not so pleased conceding four times.

Any similar lapses on Friday will be punished by the Fairview front runners.

Being the underdog never bothered Ballynanty Rvs and you can expect a full blooded affair on Friday.

On Saturday Regional Utd B are vying to join Fairview Rgs and Aisling Annacotty in the last four of the Munster Junior Cup. The small matter of seeing off St Michaels stands in their way. Regional Utd B are flying it locally having opened up a thirteen point lead at the top of the table in Division 1B.

Granted they face a stiffer test on Saturday against a Saints XI who won all before them last season but they are eagerly looking forward to the challenge and are convinced they will put up a good show. They have some superb players, well capable of playing at a higher level, but to get a result would make them the ultimate giant killers.

The Lawson Cup continues apace with some intriguing games down for decision on Sunday.

A game that would have drawn the crowds last season is Pike Rvs v Janesboro. It takes on a different hew this time around. Pike Rvs, reeling from their Munster Junior Cup exit last Sunday are in need of a good showing to get the confidence back as they look to top the Premier League.

Janesboro are in the process of rebuilding their team after losing most of last season's title winning squad.

Pike lost for the third time to Fairview after already losing in the FAI and Tuohy Cups and most worrying for the Hoops will be the fact they scored just once in the three games.

Janesboro have John Mulready between the posts again and he makes a huge difference to the side. Whether he can keep a hurting Pike at bay remains to be seen.

By contrast Coonagh fell to a heavy defeat against their fellow relegation battlers Prospect and they were as dismayed by the performance as the result.

Sunday's game takes some of the pressure off which might see them return to form. They meet a Nenagh side who seem to have weathered a bad start and now look settled.

Two more sides mired in the relegation dogfight are Kilmallock and Prospect and they meet at the county venue. Like the previous two sides, the prospect of playing a game with the pressure off is a welcome relief.

Prospect turned in their best performance of the season last weekend beating Coonagh. Kilmallock also netted four in their game with Balla but they conceded eight.

Aisling Annacotty who qualified for the semi-final of the Munster Junior Cup last weekend with a win in Cork against Coachford, turn their attention to Lawson Cup matters this Sunday when they host Hyde Rgs.

The Hyde Road club went through a traumatic week following the sudden death of their Manager Adrian Shine. Sunday's game will bring all types of emotions for the Hyde lads, but they will be glad to just back to playing football.

Aisling will have their focus on keeping their good run intact and will be aware that Hyde beat them in the FAI two seasons back.

Mungret Reg will welcome a return to action when they tackle Wembley Rvs in Mungret. Wembley qualified for the semi-finals of the Open Cup on Sunday but may find Mungret a step too far.

Knockainey take on Caherdavin Celtic and Newport welcome Northside in the other ties.

The PJ Matthews Premier League is down to a three-horse race with Regional Utd and Geraldines just outside that group. The sides meet on Sunday with little at stake but pride.

In the Premier A League Murroe can take over top spot in the League race if they can beat Athlunkard Villa in Lee Estate while in Division 1A Patrickswell will be looking to lower the colours of leaders Castle Rvs.

In the Ger Ryan Cup, Aisling host Fairview Rgs on Saturday and a day later Caherdavin welcome Charleville to the Greenhills.