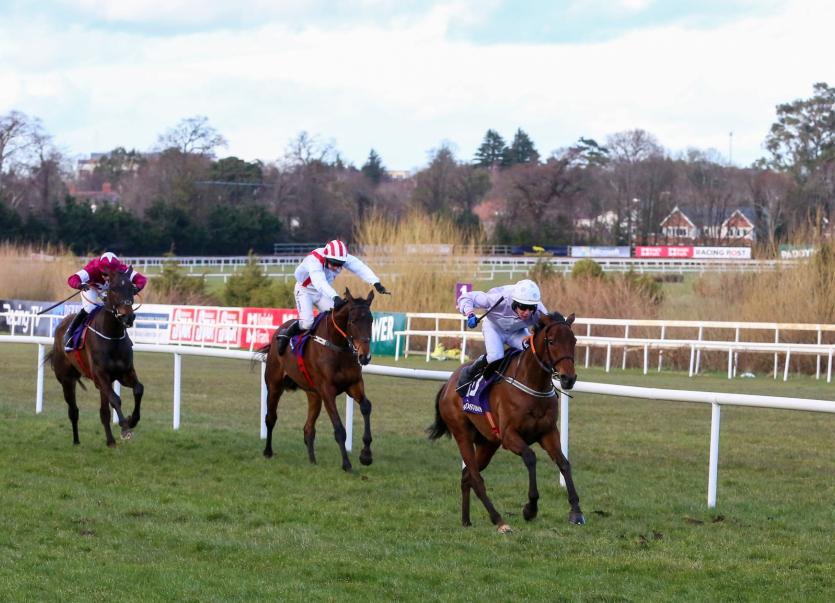 Charles Byrnes had punters in the best of form at Leopardstown on Monday where he was responsible for both winning favourites on the card. The Ballingarry trainer landed the opening Kids Go Racing Handicap Hurdle with the Cathal Landers-ridden Wajaaha and typically the four-length winner was well fancied in the betting. Backed from 9/2 to 11/4 favourite, the five-year-old hardly came off the bridle as he won from the Val O'Brien-trained Muhaafiz, the 7/2 second favourite. It was a third Leopardstown winner for the Oola jockey. Byrnes and his son Philip combined to win the concluding bumper with 15/8 favourite Run For Oscar in the colours of the Top Of The Hill Syndicate. The five-year-old went clear inside the final furlong to win by seven and a half lengths from Alko Rouge and could return during the summer months to run on the Flat.

Eoin McCarthy has plenty to be thankful to Pound A Stroke for and the eight-year-old recorded his third success for the Athea trainer at Clonmel on Wednesday. A first winner in the professional ranks for jockey Gary Noonan, the 11/1 shot made all the running and came home four and a half lengths to the good over Young Dev in the colours of the Transatlantic Syndicate. “Pound A Stroke gave me my first winner as a trainer and if he’s fit and well he’ll never let you down. He needed blinkers to help him concentrate over fences as he is a little bit bottley early in his races,” said the winning trainer who was also full of praise for Noonan, a native of Newcastlewest. He said of the 23-year-old, “Gary is good and solid and is a rider who will go places during the summer. He comes in one morning a week riding work, so he is a big help to me.” Noonan added, “That’s my first winner as a professional and I turned at Christmas. I had ridden one winner on the track as an amateur, that came at the Listowel festival last year, and a couple of point to point winners. I’m with Paddy Neville and also ride out for Eoin. I can claim from 9st 10lbs and Gary Cribbin is my agent. He has been working hard for me in the past few weeks and I’d like to thank him.”

Billy Lee and Ger Lyons shared their first winner together when 7/1 chance Corvus Glaive scored a three-length win in the 7f claiming race at Dundalk on Friday night. It was a surprise result for many as Colin Keane, Lyons’ stable jockey, was on board the runner-up, the gambled-on 4/6 favourite Eglish, trained by Ado McGuinness. Mark Enright wrapped up proceedings when he got 12/1 chance Lightning Charlie up in the dying strides to win the 6f. The eight-year-old beat 11/4 favourite Billyfairplay by a short head for trainer Johnny Feane.

Horse Racing Ireland have unveiled its five-year strategic plan for the horse racing and breeding industry for 2020-2024. Setting out six strategic priorities, with a focus on people and horses, HRI’s strategic plan outlines actions that will drive an increase in the return on government investment, significantly improve the worth of the industry to the rural economy and build on the numbers employed across the country. The Strategic Plan also targets participation at all levels of the industry with increased fixtures, a second all-weather track, to be situated at Tipperary Racecourse, an increase in the minimum race value and a programme of equine welfare initiatives. Horse Racing Ireland Chairman Nicky Hartery said: “The most recent analysis shows that for every euro of government support the racing and breeding industry receives, it returns over €30 to the economy, mostly in rural Ireland. This strategic plan seeks to build on that dynamic and further grow what is a sustainable and indigenous industry. Horse racing and breeding play a vital role in the rural economy and the delivery of this plan will increase the positive impact the industry has all over the country.”

Horse Racing Ireland (HRI) have launched their 2020 summer student internship programme which returns for its seventh year. There are a number of paid placements available, commencing in June 2020 and running for 12 weeks throughout the summer to the end of August. The programme is open to all Third Level students in any college year of any course. Students will benefit from mentoring by experienced professionals which will allow them to develop their practical skills in a fast-paced environment while gaining valuable experience of the work which goes on behind the scenes in the Irish racing and breeding industry. HRI Education and Training Manager, Grainne Murphy, said: “The student internship programme plays a key role in the strategic aim of HRI to attract new entrants into the thoroughbred racing and breeding industry. We hope that, for the successful applicants, this is the just first step to a fulfilling and rewarding career within this great industry.” Further details and the application form are available at www.workinracing.ie/ internships. Closing date for applications is this Friday, March 20.