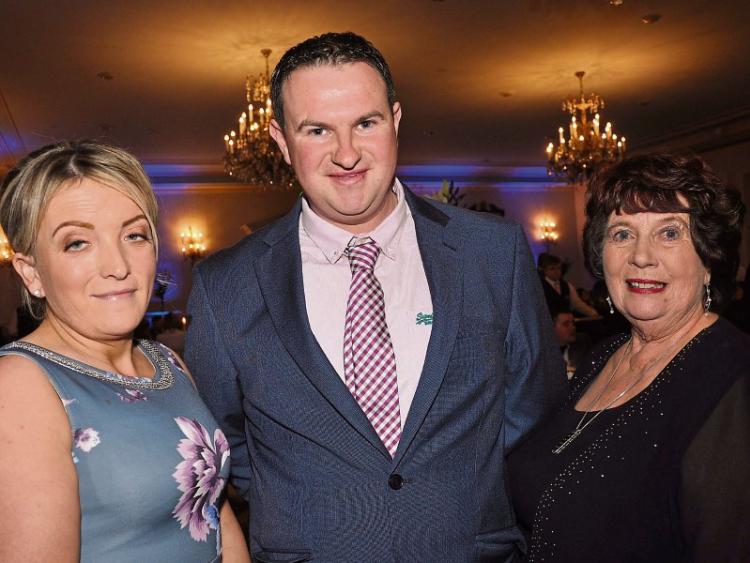 THERE was one Limerick winner at the IGB’s National Greyhound Awards on Sunday March 1.

Croom’s Fionnuala Moloney Carey was honoured with the Welfare Award.

Fionnuala and her husband James are regularly seen at Limerick Greyhound Stadium with their retired greyhounds, promoting them as pets. She also has a number of greyhounds at home, both racing and retired, and also fosters greyhounds for the Irish Retired Greyhound Trust as they prepare to move to new homes in retirement.

Fionnuala was presented with her award by Kevin Smith, Assistant Secretary of the Department of Agriculture. Also in attendance were Ger Dollard, CEO IGB, Frank Nyhan, Chairman IGB and IGB Board Members Wayne McCarthy and Aileen Lennon.

On the track, there was the usual Thursday and Saturday racing in the Limerick Stadium.

On Saturday there were two finals.

The highlight was the Selachii Legal 525 final – a place in the Con and Annie Kirby Memorial for the winner.

The Graham Holland trained Newinn Taylor was an impressive winner. The Simon Taylor owner runner had six and a half lengths to spare in the final with a winning time of 28.37. Beaten into second was Doolin Prince for Patrick Flanagan and Stuart Kenny and trainer Maire Gilbert.

Another final on the night was an ON3 535 – won by Patrick and Donal Guilfoyle with Magical Billyray. The winner’s time was 29.27. Four and three quarters of a length back in second was Knockdine Lass for Patrick Conlon and Helen O’Brien.

Denis O’Malley trained a double on the night. He won the opening race of the night – an A9/A10 525 with Stonehall Hero for the Hi Hi Hi syndicate. The winner was five lengths clear on the line in a time of 29.41. Second was Eileen Kennedy with Dixies Force.

O’Malley had a second winner when Rallying Joy won an A3 525 for the Rallying Racing syndicate. The winning time was 28.85. Six lengths back in second was Dunquin Flower for Michael Walsh.

There were a number of other local winners on the night.

David O’Riordan had Drombully as an A6 525 winner. In 29.59 the winner had three and a half lengths to spare over Timaru for Fionnuala Moloney.

James Kelly won with Gurtnacrehy Gift in an A4 525. The winner’s time of 29.38 was sufficient for a five lengths success. Second was Michael O’Brien and trainer Eamonn Quinn with Hidden Icon.

Elms Three won for Martin Butler and Michael O’Meara in an A8 525. In a time of 29.54, the winner had a length and a half to spare on the line. Bog Tree was second for Aine Sexton.

Denis Hayes and John McGrath had Denises Belle as an A3 525 winner. In 28.94 the winner was a length clear on the line ahead of Our Marys Dream for Martin Kennedy.

The Gerry Howard owned Ballymac Rosa won for trainer Stephen Murray in a sprint. The 350 was won in 19.29. A length back in second was Orlando Joseph for Breda Hayes.

As well as winning the big final of the night, Graham Holland also had an A1 525 success with Sevenheads Rock. The John O’Regan owned runner had a length and a half to spare on the line in a time of 28.85. Second was Black Knight for Jimmy White and James Roche.