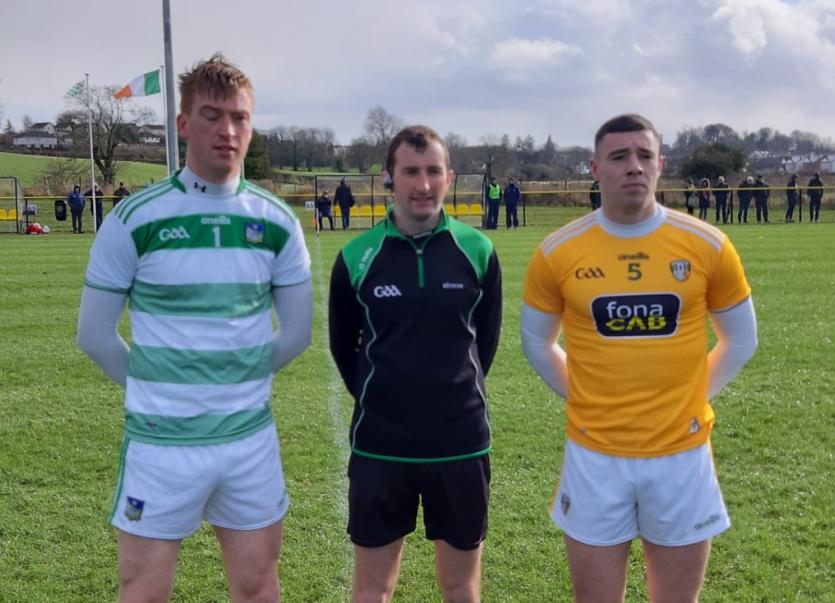 Limerick's winning streak in Division Four of the National Football League came to an end in the far corner of the country when they fell to Antrim in Portglenone on Sunday afternoon.
A seven minute period after the break turned a two-point lead into a five-point deficit as turnovers were clinically punished by the Glensmen who needed this fifth round victory to keep their hopes of promotion alive.
Twelve points may seem a comprehensive defeat but there was nothing in the game until a soft Limerick turnover led to the concession of the first goal.
Forced to chase the game, they left spaces open at the back which Antrim surgically punished to build a lead that wasn't going to be overtaken, not even if the visitors had taken the three goal chances coming their way.
Although Hugh Bourke's opener was quickly met by Peter Healy, Limerick got the start they wanted when Bourke found Danny Neville whose blocked shot on the turn was pounced on by Pádraig Scanlon who blasted to the net.
However, the response came from Antrim who found more conviction in possession as Conor Murray off a tight angle two surgical Colum Duffin strikes had them level.
Pádraig de Brún had the visitors back in front but they rode their luck when Patrick McBride's shot was fumbled but Patrick Gallagher's follow-up on the rebound screamed just over.
Tommy Griffin and Odhran Eastwood then swapped scores before Tommie Childs and de Brún put Limerick two ahead.
McBride's free was met by Cillian Fahy before Eastwood and McBride's free had the sides level.
Coming up to the break, de Brún and Tony McCarthy restored the Munstermen's advantage which held as McBride was met by Bourke's free for a half-time score of 1-9 to 0-10.
McBride and Scanlon exchanged scores within a minute of the restart but, after McBride struck again, another Limerick turnover led to McBride feeding Eastwood to finish to the net.
After Murray added a point, the Munstermen had a great chance to pull back when Bourke found Scanlan just outside the square but the corner-forward's shot blazed just over the crossbar.
At that point, Antrim's inhibition disappeared along with Limerick's shape as their attempts to claw back ending with rushed shots missing the target.
Down at the other end, Eastwood, Murray and Dermot McAleese stretched the lead before gaps at the back allowed Conor Small feed Murray for the Glensmens' second goal.
Paddy Cunningham then came off the bench to point and added another two after one from McBride who then moved the margin to thirteen.
Limerick continued to press forward but, as Iain Corbett and Mike Donovan saw their shots stopped on the line, their only reward was an added time point from Séamus O'Carroll.
Next up for Limerick is a March 14 meeting with fellow promotion chasers Wexford at Mick Neville Park in Rathkeale.

#AllianzLeagues Football Division 4 Table after Round 5