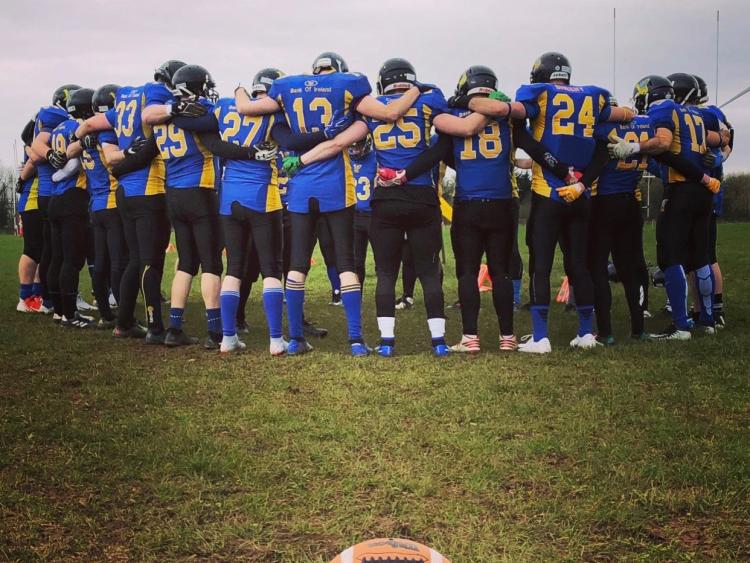 “American Football is one of those games where there's a position for everybody. If you're a big guy who's six-five and 20 stone, you can play offensive line. If you're five-four and 10 stone, you can play corner-back or wide-receiver. It's quite accessible in terms of athletic ability and body sizes,” so says Offensive Co-Ordinator of the University of Limerick (UL) American Football team Liam Ryan.

Ryan has been playing American Football for the UL Vikings since 2002 and has loved every minute of it. Just listening to him talk about the game, in a coffee shop on campus, gave me goosebumps. His passion, for a game he fell in love with, while watching game highlights on Channel Four in the 1980’s, is infectious.

The UL Vikings will begin their 20th season of play on March 8 with a trip to face their varsity rivals UCD. They’ll start off the year with a young side and will hope to progress as the season unfolds. Ryan said: “I think we've about 30-35 or 40 registered players. We're quite young and we’ve some inexperience at different positions. I don’t think we’ll be challenging for the Shamrock Bowl, but you never know, it's more about survival again this year. We've a good core of players, some excellent talent there.

“We had an interesting season last year where we lost the first few games. We were in danger of being relegated, then went on a run and beat three teams in a row, the Carrickfergus Knights, Dublin Rhinos, and one of the Shamrock Bowl bound teams the Dublin Panthers in the last game of the season to stay up. It was kind of win or be relegated the whole way through.”

One issue UL, along with the other college teams like UCD and Trinity face, is trying to hold onto their players throughout the summer, something Ryan laments: “Yeah, it's a bit of a challenge in terms of the way the league is structured. Obviously, it's a senior league. We run our season from March to July. We've players that come into us in September and are ready for road and mad to get in get involved, so what we've done is play inter varsity’s during the first semester so that they have got some game experience.

“But we are going to lose some players to J1’s or summer jobs. We’ve had some Americans that come in and maybe play three or four games and then we lose them. There's a big turnover in terms of the team from the start of the season to the end of the season. It's just part and parcel of it. It’s just the nature of being a college team, we don't keep lads for 10-12 years, it's kind of three, four years is the max.”

“If you train hard, you’ll not only be hard, you’ll be hard to beat,” said 2-time Pro Bowl running-back Herschel Walker.

What players should we look out for this season: “There's Eoin Rudkins, who’s going to be starting QB for the Vikings this year. He's an Irish kid. He's played receiver for two years, so he knows the game now. We've been working on his throwing, footwork and stuff like that so we're expecting big things from him. We have a really good strong offensive line, Adam O'Mahoney is our starting center and he's really been leading the offense line. And then on defense we have Irish under 20 captain PJ Foley, he's playing outside linebacker, a hybrid safety-type position, and he’s expected to contribute a lot.”

Ryan, who’s the International Education Officer in UL, was part of the hugely successful Vikings side who played in six consecutive Shamrock Bowls, from 2007-2012, winning three in a row. He looks back fondly at those memories, especially how it all came about: “Basically, the club was set up in 1999. It was a group of American students on campus and I think most of the team were American. They got to the Shamrock Bowl in 2001, but they all left, just before the Shamrock Bowl. There was maybe 10-15 Irish guys, and they didn't really have a hugely successful transition.

“So, there was a chap called Paddy Ryan and he sat at the UL clubs of societies in 2002 by himself. He was the only club member at the time. And he said, we'll see who shows up. The gear was all there, but there were no members. Before I came to UL, I knew there was an American football team. I had watched a couple of games, and literally the first stand I went to when I came into UL was American Football. Myself and a group of friends signed up and played a couple of friendlies. It’s the only club I signed up for. And 18 years later, I'm still a member. We kept that core group together then from 2002 to 2010 or so, most of us were from Limerick, or from the local area.

“With football being such a complicated game, you need lads together for a long period of time, that was a huge benefit. We lost every game from 2002 to 2004, I think. We learned a lot. The first game we actually won, we celebrated like we won the Super Bowl, with champagne in the stables (college bar). We made the Shamrock Bowl in 2006 against the Dublin Rebels, but we just weren't ready. We were still small and still young and a bit naïve, I think. They beat us well, 42-10 or something like that. That game interestingly enough was the only Shamrock Bowl to be shown live on Sky Sports.

“We learnt a lot from that season. We said, ‘we need to be a bit more cut-throat; we need to have a bit more structure to what we're doing.’ We had that core group of lads that stayed together so we all just knuckled down and said, ‘listen we have the talent, we have everything we need, we just need to get a bit stronger, a bit faster.’ And then in 2007 we won our first Bowl. We hosted it here in Limerick against Cork. And then we beat the Rebels two years running in Cork and in Belfast, which was amazing. And in 2010, 10 years ago now, we won the European Championships, the Atlantic Cup.”

Time may be catching up with him as regards playing, but he still can’t let go: “I registered as a player this year. It's kind of one of those things that - in case of emergency break glass! I'm technically the backup QB. If the QB gets injured, I’ll probably have to go and step in, but in an ideal world I won’t be playing.”

For someone who’s thinking they’d like to get involved in American Football, what would you say to them: “It's one of those sports, it takes a little bit of time to get used to, so I think if you if you sit down watch a game and you don't understand what's happening it looks quite off-putting. The benefit of football is that it's the more you understand it, the more enjoyable it becomes.

“Just the camaraderie, in terms of the amount of work you have to do to have a team working together, 11 guys on the field, knowing every single person has a role for each play, and then executing that correctly.

“It forms a bit of a bond with the team and stuff of that. I've made friends for life in terms of your teammates and stuff. I’ve been best man or groomsmen for probably 15 or 20 Vikings over the last few years, so there's a real sense of camaraderie there and just the strategy and the complexity of the game. There's a bit more to it than just get a ball and go off and have a game.”