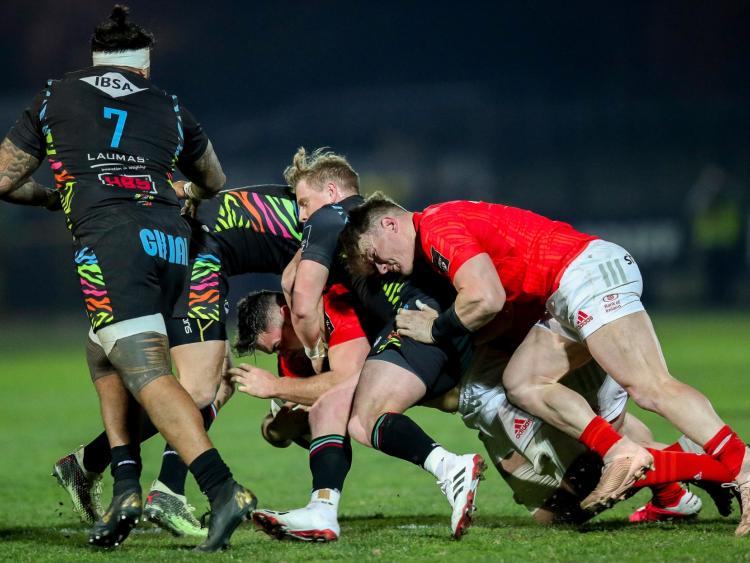 MUNSTER had to sweat before closing out a 28-0 bonus point victory over 14-man Zebre in their Guinness Pro14 clash in Italy on Friday night.

A much-improved second half display from Johann van Graan's side saw Munster score three tries to finally seal a maximum five point haul against a gritty Zebre side who had winger Pierre Bruno red-carded after just 10 minutes.

Munster's four tries were scored by Limerick winger Calvin Nash in the opening half, and three more in the second 40 minutes, from centre Rory Scannell, Man of the Match JJ Hanrahan and finally returned winger Darren Sweetnam.

Munster were forced into a late change just before kick-off as winger Shane Daly pulled up in the warm-up. He was replaced in the starting team by Darren Sweetnam.

JJ Hanrahan goes over the line following a sustained spell of Munster pressure, then kicks the extras.#ZEBvMUN #GuinnessPRO14 pic.twitter.com/jAddNn1uj7

After Zebre missed an early opportunity to take the lead through a Pierre Bruno penalty, the winger was red-carded in the 10th minute.

Bruno was sent off for leading with his forearm into Munster flanker Chris Cloete's neck and chin area.

Rory Scannell goes in at the corner. JJ Hanrahan nails the conversion from the right touchline.#ZEBvMUN #GuinnessPRO14 pic.twitter.com/RjrXYMGiRU

Munster took the lead in the 12th minute when alert winger Calvin Nash won the race to the touchdown from Craig Casey's well-placed grubber kick in behind the Zebre defence.

Zebre, despite being down a player, enjoyed 67% possession and 75% territory in that opening half against a misfiring Munster side.

Both teams observed a Minute's silence before kick-off as a mark of respect for former Munster CEO Garrett Fitzgerald who passed away last week.

Munster's improved second half showing proved too much for the Italians who visibly tired.

The two sides have now met on 15 previous occasions with Munster winning them all.</p

Calvin Nash gets the lightest of touches on to Craig Casey's kick, and JJ Hanrahan adds the extras.#ZEBvMUN #GuinnessPRO14 pic.twitter.com/RWKXWtETDS

Next up for Munster is a crucial home fixture against the Scarlets at Thomond Park on Saturday, February 29.