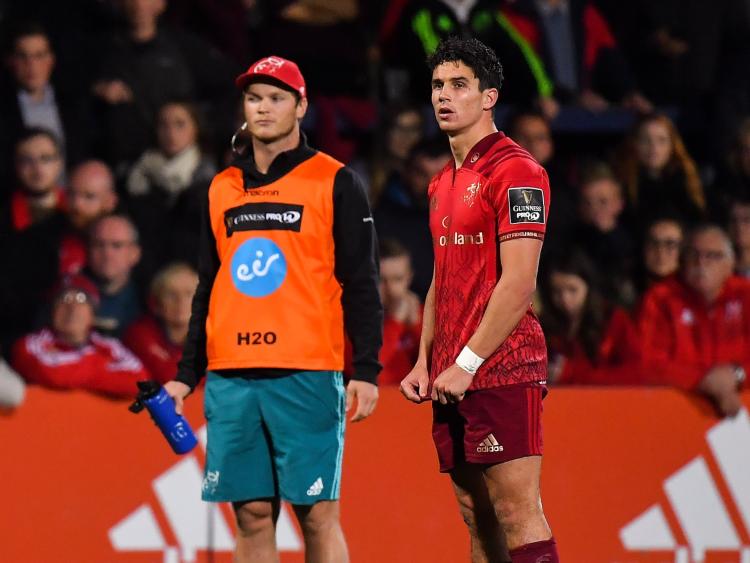 MUNSTER head coach, Johann van Graan revealed that New Zealand out-half Tyler Bleyendaal is back doing some running as he looks to recover from a neck injury.

Munster confirmed in December that the talented out-half Bleyendaal had sustained a new neck injury.

The 29-year-old has had neck surgery on two previous occasions.

Bleyendaal reported stiffness in his neck in the wake of Munster’s win away to the Ospreys in the Heineken Champions Cup in November.

Johann van Graan explained at Munster’s weekly press briefing at UL this week: “Tyler has started to do some running, but still a bit of time to go on him. He's progressing but, like we said, right from the start we won't put him back into rugby until he's been medically cleared.

Munster estimated at the start of January that 24-year-old Ireland star Carbery would be sidelined for three to four months after undergoing surgery on the damaged wrist ligaments in a PRO14 defeat to Ulster in Belfast.

“Joey (Carbery) is gone for another update at the back end of last week and we're still waiting for one or two reports on him and you know we are having a real good look at his development over the coming months whilst he is away from the game so as soon as we have any updates we will give that.”

Munster look set to make several changes to the starting line for Friday night’s game in Milan from the one which thumped the Southern Kings 68-3 at Musgrave Park last week.

Back-row Tommy O’Donnell and winger Darren Sweetnam are in the mix to feature against Zebre after recovering from hamstring injuries .

Van Graan said: “Tommy (O’Donnell) did the game day warm up with us on Friday evening in Cork and he's rarin’ to go and Sweets (Darren Sweetnam) came through about 50 minutes on the weekend (for Cork Con in the AlI-Ireland League) so both of them or available for selection this weekend.”

Munster ran in 10 tries in their crushing victory over the Kings in Cork last week,

Second-placed Munster sit three points behind table toppers Edinburgh in Conference B of the Guinness Pro14.

Munster have won all 14 of their previous meetings with Zebre, who have won just twice in the PRO14 this season.

Van Graan confirmed that the province will be parting ways with a number of players this summer.

He said: "Yeah, like every squad across the world you know you’ll get some guys coming into your team, whether it's from the academy or from the outside and you'll have some guys whether it is from the Academy or the senior group that will move on.

"I'm not going to speak about names at this stage, but certain guys will leave the club and they were they're all in for the rest of the season, like all players at Munster always are, and we'll have a few new faces joining us at the start of next season, and that's the beauty of sport, I guess that's life.

"You know you might lose some players at the back end of the season and you're going to get some new players in and that's a lot of excitement for next season, but there’s still a lot of work before we get to next season,

"We’ve still got a massive block of games coming into the end of this season."