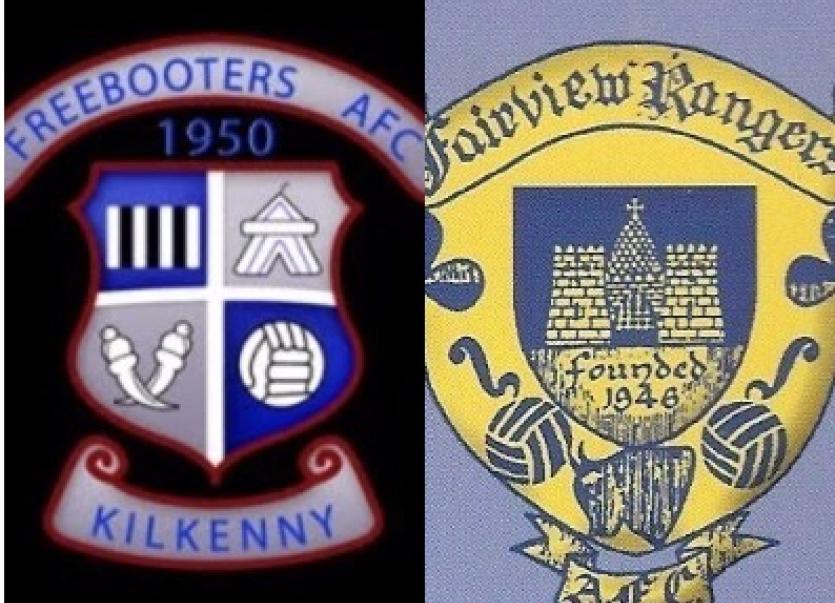 Limerick’s interest in the FAI Youth Cup ended for 2019/20 on Saturday when both remaining sides. Fairview Rgs and Aisling both exited the competition on a 3-2 scoreline.
Fairview faced a trip to Kilkenny in the middle of Storm Dennis and understandably enough took the field facing heavy rain and howling wind.
Fairview were backed by a busload of supporters diverted from a trip to Waterford for the abandoned Junior game.
To be fair to the home side, the pitch appeared playable but within minutes the underfoot conditions deteriorated.
However it proved the worst possible start for the ‘View and after 3 minutes, failure to clear their lines proved costly when the lively Zac Hammond.
Fairview responded well and on fifteen minutes Scott Kirwan found Cian Fitzgerald who slipped Eoin Duff through but he drove narrowly wide of the target.
The weather made it hard to defend and long clearances were the order of the day.
The middle period of the half saw the home side gain the advantage but found no real threat, and, in truth there was little in the way of clear chances for either side.
That changed ten minutes before the break when a long Scott Kirwan free kick was well defended by the home side as Zach Sheehan was about to pounce.
From the resulting corner Sheehan whipped in an inviting ball and Ethan O'Sullivan headed just over when well placed.
The away side’s dominance continued Cian Fitzgerald found space from a Josh Shinnors pass and played in Sean Ezekannagha who was felled in the area. Eoin Duff coolly dispatched and Fairview were back on level terms
Fairview continued to push for the lead but the weather was making it a lottery and it was the home side who got the breakthrough before the break when Hammond scored his second of the day with a well-worked goal.
Half time came and went with the conditions deteriorating and both sides struggled to get underfoot conditions right with passing at a premium. However, in a rare moment of real quality, the visitors tied the game. The highly impressive Jamie Griffin’s through ball set Eoin Duff away on the right and his inch perfect pass gave Cian O’Neill the opening to finish from close range. 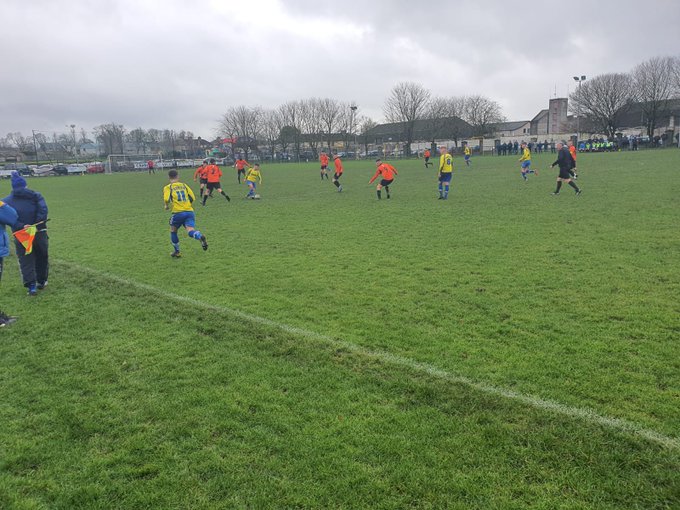 The visitors joy was short lived however and in similar fashion to the first Freebooters scored again. A pass through the middle by Mick Leahy found Hannon who completed his hat trick to give his side a lead for the third time in the game. It could have been worse for ‘View but for a couple of fine saves by Dylan O’Sullivan in the Fairview goal. The ding dong nature continued though, and Fairview almost equalised. Duff drilled across the face of goal but the ball evaded all the attackers and was thumped to safety.
Hopes were fading for Fairview and all but ended when they were reduced to ten late on.

Like Fairview, Aisling had high hopes of having a good run in the National competition but came unstuck against a committed Park Utd XI from Cork in Annacotty on Saturday evening.
The Limerick side had plenty of chances to win the tie but ultimately paid the price for a pedestrian opening quarter that saw the visitors take a two goal lead.
Aisling possess a highly talented squad but right from the off it was obvious the visitors were showing the greater hunger and were winning the 50-50 clashes around the park.
The home side did have the first near miss after seven minutes when Eoghan Burke’s inswinging corner saw Ronan O’Dwyer rise but his back header went just over from six yards.
Park took the lead after twenty minutes. A free kick on half way from Paddy Hanrahan was floated into the box where Scott Connolly headed out. The clearance fell to Pierce Pigott who coolly controlled and picked his spot to return a volley to the back of the Aisling net.
If Aisling manager Paul Burke was disappointed at his players not picking up the loose man then ten minutes later his mood did not improve when the visitors added a second.
Leon Murphy was allowed weave his way into the Aisling area and a half clearance fell to Cameron Keane who picked out his striker Darren Caplice who turned two defenders before firing high into the net from eight yards.
Being two down sparked Aisling into life and they took control of the game thereafter but time and again they were thwarted by a classy pairing of Jack O'Shea and Jake Buckley, the latter particularly showing a maturity beyond his years.
Aisling were back in the game ten minutes from the break. Conor Arthur’s corner kick struck the crossbar with the defence just spectators. Cillian O’Shea picked up the loose ball and fed Scott McEvoy in the area who teed up Aodh Ó hAnluain to volley in a beauty from the edge of the box.
Ó hAnluain nearly levelled the tie five minutes later when he got on the end of Leon Keane’s long looping cross but he fired just over the top.
Just before the short whistle Park gave notice of the threat they posed when Jack O’Shea headed narrowly wide from another Hanrahan delivery.
From the restart Aisling were well in control. Keane went within a whisker of handling Aisling an equaliser and minutes later Ger Quaide took advantage of a loose back pass but his first time effort forced ‘keeper James Crotty into a full length save.
Cillian O’Shea showed great strength to get past his marker a put a ball across the face of goal but Crotty saved again as Ben O’Shaughnessy prepared to finish.
The pressure was building and it was no surprise when the equaliser came on 65 minutes. O’Shea gathered on the right and cut inside his marker to bear down on goal. Despite having three defenders around him the Aisling striker finished in style from an acute angle.
Park were on the rack but they showed their character by battling their way back into the game and regained the lead on 72 minutes.
Sean O’Connell’s corner was headed back across goal by Keane and Jack O’Shea’s close range header was cleared off the line by Dara Hogan. However O’Connell collected the clearance and delivered again to the back post where Darragh Brennan bravely raced in to head home from point blank range.
Aisling went all out for the equaliser. Cillian O’Shea blasted over when played through by O’Shaughnessy and minutes later the same player hit a blistering volley from the edge of the box that was inches over the top.
Ronan O’Dwyer looked like he would score meeting Burke’s corner six yards out but the effort was straight at keeper Crotty who gathered with glee.
A stunning save by Hamm denied Aaron O’Brien at the other end and Aisling’s last chance fell to O’Shaughnessy who tried his luck from 20 yards but was narrowly wide of the target.

Team of the Decade

Following on from last week’s article reviewing the last ten years on the Premier League, plans are in place to select a “Team of the Decade” for the period 2010-2020.
Organisers are in the process of securing sponsors for the event which they would hope to incorporate with the Player of the Year awards at Season’s end.
Five volunteers have sign on, all well versed in the comings and goings of Junior Soccer over the last ten years, and their job will be to whittle through the candidates to come up with the final selection.
Declan Considine, David Dunphy, Mike Considine, Daithi O’Donoghue and Jan Malone are those tasked with selecting the final XI and they are aware that club colours will be removed for the selection period to ensure those deserving get the recognition due.
In 2010 we had a similar event to honour players from the previous decade and the Team named was as follows;