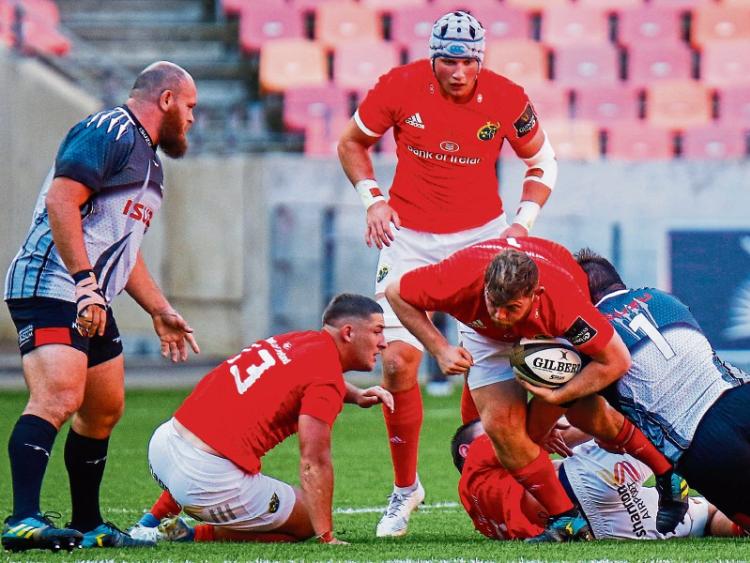 MUNSTER’S sole focus has switched to the Guinness PRO14 this week in the wake of their disappointing Heineken Champions Cup exit at the pool stages.

Johann van Graan’s charges resume their programme of regular season games in the PRO14 this Friday with a crucial fixture against a struggling Southern Kings side at Musgrave Park, 7.35pm.

Munster have been boosted ahead of their clash with the Kings by the release back from Ireland Six Nations squad of key players, centre Chris Farrell and back-row Jack O’Donoghue.

Munster have slipped to third place in Conference B of the Pro14, their only win in the last four rounds of the league was the 19-14 win over Connacht in Galway in December.

With their Ireland contingent set to miss four rounds of the Guinness Pro14 during the Six Nations window, several young members of the Munster squad will get to stake a claim for more gametime over the coming weeks.

These include Limerick winger Calvin Nash who made his Heineken Champions Cup debut against the Ospreys at Thomond Park last month.

Twenty two-year-old winger Nash is in line to add to his tally of caps for Munster with wingers Keith Earls and Andrew Conway key members of Andy Farrell’s Ireland squad.

Winger Nash says Ireland stars Earls and Conway have had a big influence on him to date.

“And like Earlsy (Keith Earls) picking up that knock. I need to be able to stand up and give the same performance Earlsy would do if not better. I am really enjoying rugby this year and just hopefully keep kicking on.

“I grew up watching Earlsy as well, it is nice to play with him and learn off him. He would be the model player.

“He has been Ireland’s No 1 winger for, I’m not sure how long, but he has been there and thereabouts. He has even played for the Lions.

“I have my own style of play, but at the same time there is no point not admiring what he has done and the way he does play the game.

“He is constantly learning as well and probably has one of the best work-rates along with Conway to really adapt their game and improve as players, week in week out.

“I would model myself off both of them, but at the same time I wouldn’t want to lose something that is the way I play as well.”

Nash’s younger brother Brandon has been impressing for Crescent College Comprehensive in the Clayton Hotels Munster Schools Junior Cup this season, including scoring two tries in their victory over Bandon Grammar School at Thomond Park.

Calvin Nash said: “It was my first time going out to see him (Brandon) in a good while (game against Bandon GS). I was very impressed with him in fairness.

“Some lads would be saying he is better than me already, but we will see!.”

Larkham said: “There is a bit of change in the centre position at outside centre (with Ireland). There is a great opportunity.

“I think he (Farrell) has played well in his most recent games for us, there are a few elements we have spoken about that he is trying to improve week to week and he is one of those players, he is someone who picks things up really quickly so he has got smarts.”