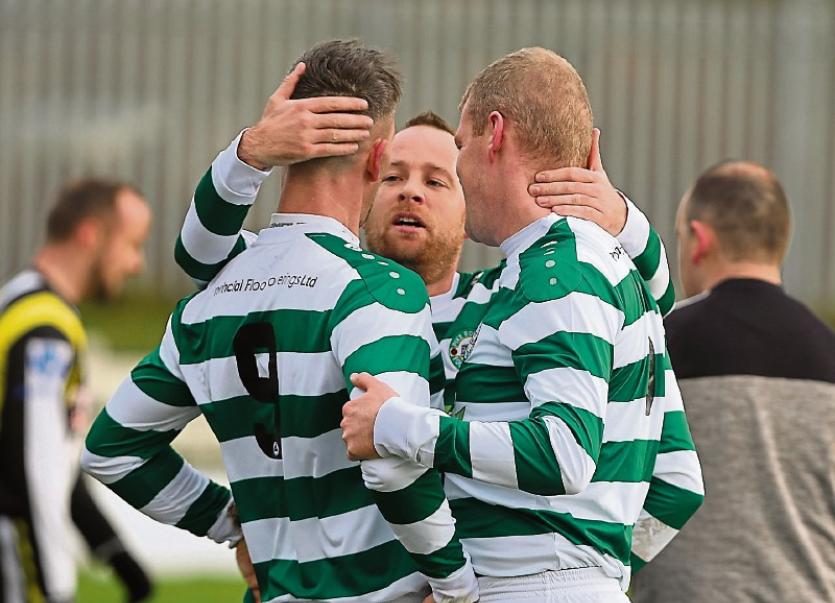 On Saturday, Regional A and Regional B are on the road in Cork and Tipperary while Fairview head for Waterford.

On Sunday Aisling Annacotty welcome Drinagh Rgs while Pike Rvs and Geraldines clash in the only all-Limerick affair.

Pike Rvs will field for the first time since their FAI Junior Cup defeat to Fairview so all eyes will be on their demeanour.

Geraldines seem to have the ability to lift their game for the big occasion and they will be well up for the this one.

Steve McGann’s return and a possible start for Colm Walsh-O’Loughlin could give the Hoops the bite they were lacking in their last outing.

Barry Harnett and Cian Byrnes were sprung from the bench in the ‘dines win over Killavilla in the last round and they may have done enough to get a start for this weekend.

If Fairview progress in their game, they will take on the winners of this one so there is plenty to play for.

Cork side Coachford are lying second in the Cork Premier League but have a whopping five games in hand on leaders Knocknaheeney. They welcome Regional Utd A to their grass pitch on Saturday afternoon.

If Regional play to their best they are good enough to progress. Their B team might not be in the same boat as they face a daunting task away to holders St Michaels. With nothing to lose the Bees will give it a go and hope for the best.

Waterford Division 1B side Stradbally welcome Fairview Rgs and while the Limerick side will be strong favourites they need to guard against complacency.

Aisling Annacotty also face Cork opposition in the guise of Drinagh Rgs. The firepower of the Limerick side should be enough to see them progress.

Two Limerick sides are in action in the FAI Youth Cup. Aisling Annacotty take on Cork side Park Utd with the unusual kick off time of 6pm while four hours earlier Fairview travel to Freebooters in Waterford.

Four outstanding games in the Lawson Cup are scheduled for Sunday morning.

Nenagh meet Coonagh Utd in an all-Premier league tie. With both sides too close to the drop zone for comfort, they will treat this as a bonus.

Nenagh have hit a good run of form and they meet a Coonagh side still recovering from their FAI exit.

Another all-Premier affair pits Kilmallock against Prospect. Kilmallock have been showing signs of a return to form of late and in contrast Prospect have not been playing as well as earlier in the campaign.

Newport will be fancied to advance at home to Northside while Knockainey host Caherdavin in the final tie.

Murroe can take over top spot in the McGettigans Premier A League if they can win at Athlunkard Villa, never an easy task. Defeat for either Fairview Rgs B or Hill Celtic in their tie will end their hopes of promotion.

In Division 1A leaders Castle Rvs take on Patrickswell in LIT while Hyde Rgs will be looking to keep pace at Shelbourne. Star Rvs can keep tabs also but they face a sterner test away to Ball landers.