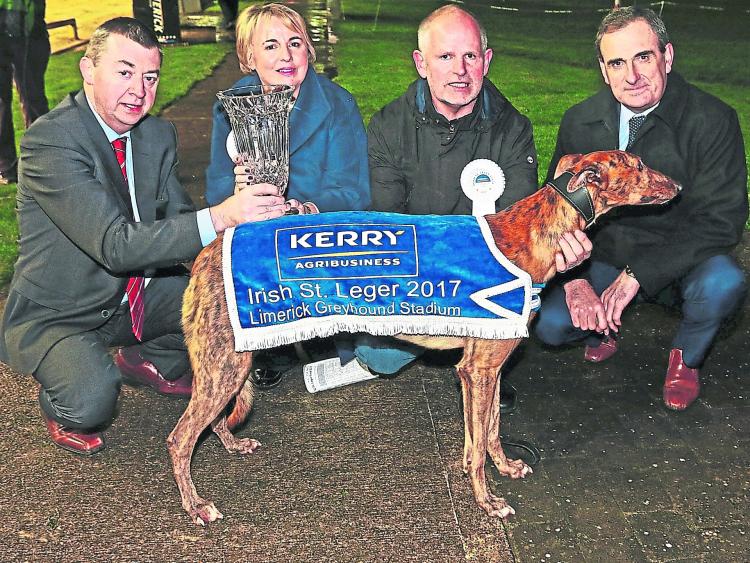 ALL-CONQUERING Limerick greyhound Clonbrien Hero has been cleared of charges of ‘failing’ a drugs test.

This week the Irish Greyhound Board published the latest report from their Control Committee, which confirmed the Limerick owned greyhound had “no case to answer” in respect of adverse analytical findings.

Owned by Kay Murphy of Athlacca and trained in Golden, Co Tipperary by Graham Holland, Clonbrien Hero has career winnings of over €120,000.

Clonbrien Hero is a former winner of Limerick’s Irish St Leger, the Laurels in Cork, the Produce Stakes in Clonmel and the Kerry GAA Supporters Race of Champions.

And, the Ned Murphy bred runner was a finalist in the 2018 Irish Derby.

In September 2017, it was revealed that Clonbrien Hero had failed drug tests for benzoylecgonine, the main metabolite of cocaine.

Both Kay Murphy and Graham Holland denied the charge from the outset.

It was reported that Clonbrien Hero had tested positive for the prohibited substance three times within a four week period, between June 24 and July 22 in 2017 – one of the failed tests was at the Laurels final, which Clonbrien Hero won in 28 seconds.

Just over one year after the initial statement confirming the adverse analytical findings, Justice Tara Burns, ruled against Holland, which ultimately reopened the investigation into Clonbrien Hero via the Control Committee.

This week – over two and a half years after the first drug test - the Control Committee report confirms that Clonbrien Hero’s trainer Graham Holland “had no case to answer” in respect of the 2017 adverse analytical findings.

The published report states: “The Control Committee, having considered all of the evidence in these matters was satisfied in the first instance that the Board properly referred the cases to the Control Committee pursuant to its obligation under legislation. The Committee accepted that the samples in question were obtained from the greyhound Clonbrien Hero.”

“The Control Committee took into consideration in its deliberations a report prepared by Professor Thomas Tobin, a recognised scientific expert in such matters, which was presented to the Control Committee by Mr Gibbons on behalf of Mr. Holland. Professor Tobin’s report concluded that in his view as an experienced Veterinarian, Pharmacologist and Toxicologist, the levels of Benzoylecgonine detected in the samples in question were all of sufficiently low concentration that they were, by definition, pharmacologically and forensically insignificant and completely consistent with innocent and unavoidable environmental origins.”