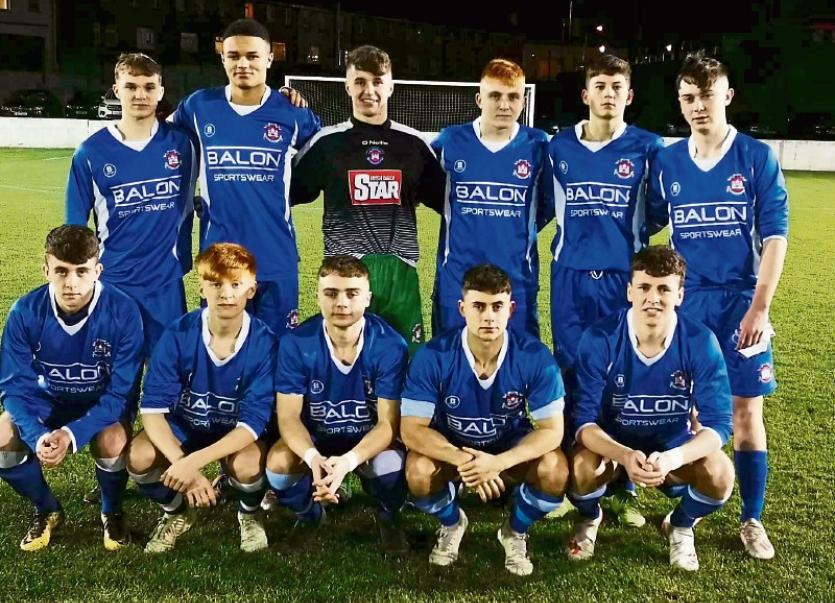 Needing just a point to win their Group, Limerick went about their task in a professional manner and thoroughly deserved their win.

Martin Sugrue, who guided Limerick to success in the tournament last season, is at the helm again as his side attempt back to back wins and judging from their first couple of outings it will take a very good side to topple them.

The home side were superb throughout the team but special mention must go to the display of Shay McCarthy, Ger Quaid and Sean Connolly while Newport’s Jake Dillon was superb in a man of the match performance.

Both sides were tentative early on but within ten minutes Limerick had engineered the perfect start. Ronan O’Dwyer (drafted into the side before kick off following the Treaty Utd withdrawal) sent a corner kick into the danger zone when Shay McCarthy was adjudged to be pulled in the box and his Fairview team mate Eoin Duff stepped up to convert the resulting spot kick, firing into the bottom corner.

Five minutes later Dillon’s well struck effort from the edge of the area forced Cork keeper Ben O’Leary to make a good save.

Midway through the half Ethan O’Sullivan and Ger Quaid combined to put Cian Fitzgerald free but his snap shot skimmed the butt of the post.

Limerick keeper Sean Hamm’s first test came on 27 minutes when the impressive Anto Frank let fly with a rasper that the Aisling turned away to safety.

Minutes later a long clearance by Joe Kavanagh was flicked on by Duff for Dillon but his shot from a tight angle went just wide.

The Cork side had a chance before the break when Killian O’Brien latched onto Adam Walsh’s through ball but Shay McCarthy got a vital touch to send the shot over the top.

The visitors continued to press after the break and got their reward on 55 minutes. Awarded a free kick 30 yards out Conor Hanly took a quick one to Jack Dawson and his ball into the path Franks who drilled a superb effort to the top corner for the equaliser.

Limerick showed great character and were back in front within minutes. A super mazy run by Ger Quaid saw him play the ball across the six yard box to Duff who in turn teed up Dillon to rifle in a goal that his performance merited.

Limerick introduced Jamie Griffin and he immediately got the measure of his marker and was causing the visitors all kinds of trouble.

Fittingly he got the insurance goal six minutes from time when he took advance of a defensive error, caused by Eoin Duff’s persistence, to race in to fire past O’Leary and seal the win.