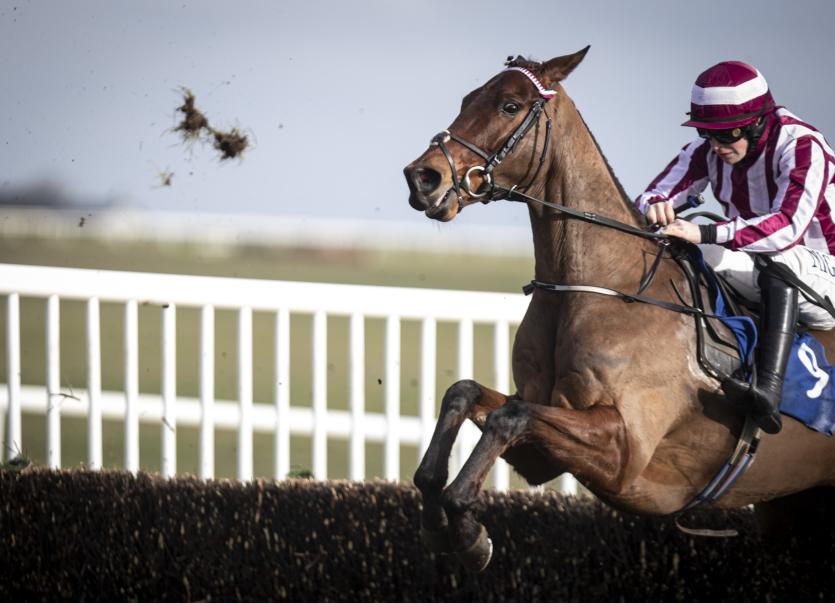 Donie McInerney was in the saddle as Mitchouka came from off the pace to land the beginners’ chase at Thurles on Thursday. Trained in Dunshaughlin, County Meath by Gearoid O'Loughlin, the 8/1 shot arrived late on the scene to get the better of the front-running 3/1 chance Arvico Bleu close to the line. “We have a lot of schooling done with him. Gordon Elliott had him and felt he’d lost his confidence and in fairness to Donie McInerney, he has done a hell of a lot of schooling with him. We bought him in October, gave him seven weeks off and had him ready for the Christmas meeting Leopardstown but he gave himself a bad enough overreach and I couldn’t run him. I don’t know where we go with him but I’m sure there’ll be something coming up in the next few weeks.” Eric McNamara won the 2m6f handicap hurdle with the Sean Curran-owned Cahirdown Boy. The longest-priced winner of the day at 14/1, he was well on top after the final flight and went clear to win by five and a half lengths under Jonathan Moore. McNamara said, “He just wanted better ground. I made a mistake when I ran him at Limerick and it’s a mistake I won’t make again with him. Today was the best he has jumped, and he has been improving. He could keep going for the summer.”

Chris Hayes and Fozzy Stack won the 5f maiden at Dundalk on Friday night. The scored with the easy-to-back 5/1 chance American Lady, the three-year-old getting the better of market principals Healy’s double, the 7/4 favourite, and 9/4 shot Bombshell in good style, making light of her wide draw.

Bellharbour Point-to-Point on target to raise €20,000 for Cancer Trials Ireland

Bellharbour Point-to-Point’s fundraising efforts to support Pat Smullen in raising awareness and money for pancreatic cancer trails is on target to raise €20,000. The race meeting on Sunday, February 2 at the County Clare venue included many charity elements which culminated in the ‘Pat Smullen Legends Race for Cancer Trials Ireland’ and saw many famous names from racing taking part in the event with all proceeds raised going to Cancer Trials Ireland. Paul Carberry, Adrian Maguire, Jason Titley, Willie Twiston Davies, Mick Winters, Trevor Horgan, and Tom Keating are just a number of those who took part. Approximately a furlong from home, it looked like Jason Titley was going to come out on top, but Tom Costello launched a late challenge to power home and beat the Grand National winning jockey into second place. Adrian Maguire claimed the third spot in what was a photo finish between himself and Sam Curling, who had to settle for the fourth spot. Paul Carberry finished back in fifth, while Mick Winters, who led for a good part of the event, finished sixth. Smullen was in attendance and was delighted with the continued support shown for Cancer Trials Ireland following on from the fundraising held on Longines Irish Champions Weekend last September. He said, “It's just overwhelming, from what we did over Longines Irish Champions Weekend to what the Bellharbour committee have sone, it has just grown legs, it's really humbling. I want to reassure everybody that all the money raised will go directly to Cancer Trials Ireland, and hopefully it will do a lot of good work in the future.”

Horse Racing Ireland (HRI) have launched their 2020 summer student internship programme which returns for its seventh year. There are a number of paid placements available, commencing in June 2020 and running for 12 weeks throughout the summer to the end of August. The programme is open to all Third Level students in any college year of any course. Students will benefit from mentoring by experienced professionals which will allow them to develop their practical skills in a fast-paced environment while gaining valuable experience of the work which goes on behind the scenes in the Irish racing and breeding industry. HRI Education and Training Manager, Grainne Murphy, said: “The student internship programme plays a key role in the strategic aim of HRI to attract new entrants into the thoroughbred racing and breeding industry. We hope that, for the successful applicants, this is the just first step to a fulfilling and rewarding career within this great industry.” Further details and the application form are available at www.workinracing.ie/ internships. Closing date for applications is March 20, 2020.