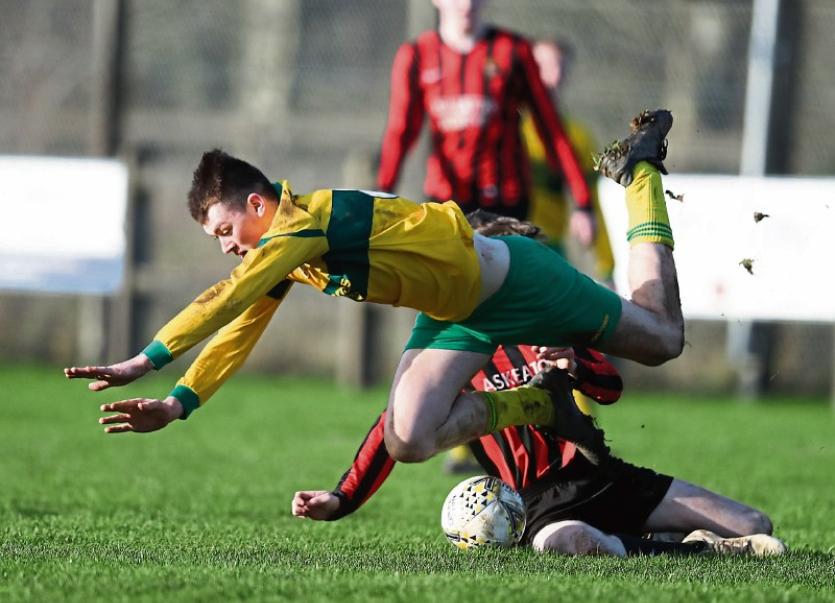 Ballingarry recorded a deserved 1-0 victory away to Askeaton on Saturday and are now just three points behind leaders Askeaton with two games in hand.

The winning goal was scored in the 72nd minute by substitute Michael Southgate, who had come on just seven minutes earlier. The instigator was midfielder Darragh Casey, who ran powerfully with the ball from halfway, was briefly dispossessed, regained possession and then chipped up the line to Southgate, who cut in from the left and drilled low and hard inside the far post.

That was the highlight of a Man of the Match performance by Casey, whose towering performance, allied to the artistry and industry of his central midfield partner, Josh Quille, played a big part in Ballingarry exerting their dominance in the second-half.

Askeaton, while still leading the league by two points from St. Ita’s, may yet come to rue the fact that they didn’t grasp the chance to open up a five-point gap. The Ballingarry management team of Dean Clancy and his father John will be delighted with this victory, which puts them in very good shape in the League and will act as a boost as they prepare for their Munster Junior Cup quarter-final away to Carrigaline United on the weekend of 22/23 February.

Rathkeale are the new leaders of the Premier Division after their 3-1 victory away to Kilcornan, now a point in front of Glin Rovers, who had led since mid-December. Rathkeale led 3-0 with goals from Gary Enright, Keith Harnett and Shane Doherty before Ciaran Deegan scored a consolation goal in the last minute.

Broadford United and Abbeyfeale United join Glin Rovers in second place after decisive home victories. Broadford were 2-1 up at half-time against Granagh United with goals from Timmy Larkin and Joe McAuliffe and they pulled away in the last twenty minutes thanks to Brian Ahern and Larkin again.

The scoring pattern was somewhat similar in Abbeyfeale’s 5-1 win against Ballingarry, who opened the scoring in the 5th minute through Mike Molloy. Abbeyfeale led 2-1 at half-time with headers from Thomas Smith and Barry Sheehy, while the second-half scorers were Liam Collins, Fiachra Cotter and Billy Quirke.

At the other end of the table, it may have taken seven games for Carrig Celtic to record their first victory but when it came they did it in style, winning 6-0 at home to bottom-of-the-table Adare United. It was only 1-0 at half-time, the goal scored by Ray Cahill, but the floodgates opened in the second-half when Seanie King, Noel Callanan, Anthony Molyneaux, Killian Enright and Donie Nolan all got on the scoresheet.

With the top two in Division 1, Breska Rovers and St. Ita’s, not in action, third-placed Pallaskenry took the opportunity to close the gap when they recorded a 5-2 victory at home to Rathkeale B. They led 4-1 at half-time with goals from Rory Cullen, Michael O’Neill (2) and Ger Garvey, while Cullen was on the mark again in the second-half.

Newcastle West Town Reserves looked at half-time to be on course to stay level on points with Pallaskenry, leading 2-0 at home to Knockaderry with goals from James O’Sullivan and Darragh Quilligan, but they had to settle for a draw when Declan Guinea and Michael O’Sullivan scored for the visitors in the second-half.

Creeves Celtic moved out of the bottom two by winning 4-1 away to Shannonside FC with goals from Tom Shanahan, James Bridgeman and Andrew White (2).

There were goals galore in the two Division 2 games that were played. Paul Madigan (2), Ray Lynch and Derry McCarthy scored for Broadford United Reserves in their 4-3 victory away to Glin Rovers B, for whom Adrian O’Sullivan netted a hat-trick.

Goals from Darragh Ranahan (2), Ray Kelly, Brandon Murphy and John O’Shaughnessy secured a 5-4 victory for Askeaton away to Carrig Celtic B, for whom Killian Collins, Luke Gleeson and Peter Cregan (2) were on target.

Broadford United stayed in contention to win the Youths League for the third season in a row when they moved to within three points of leaders Askeaton with a 6-2 victory away to Granagh United. Their goals were scored by Graham Roche, Darragh Ryan, Bryan Guinea (2), Michael Pierce and Alan Power.

Newcastle West Town had an even bigger victory, winning 8-2 at home to Athea United. The sides were level at half-time, with Athea having fought back to cancel out the goals from Evan McMahon and Jamie Baynham.

There was only one side in it in the second-half, with Newcastle scoring six times through a brace each from Rob Szebeni and Aaron Mullane and a goal each from Alex Erswell and Leon Barry.