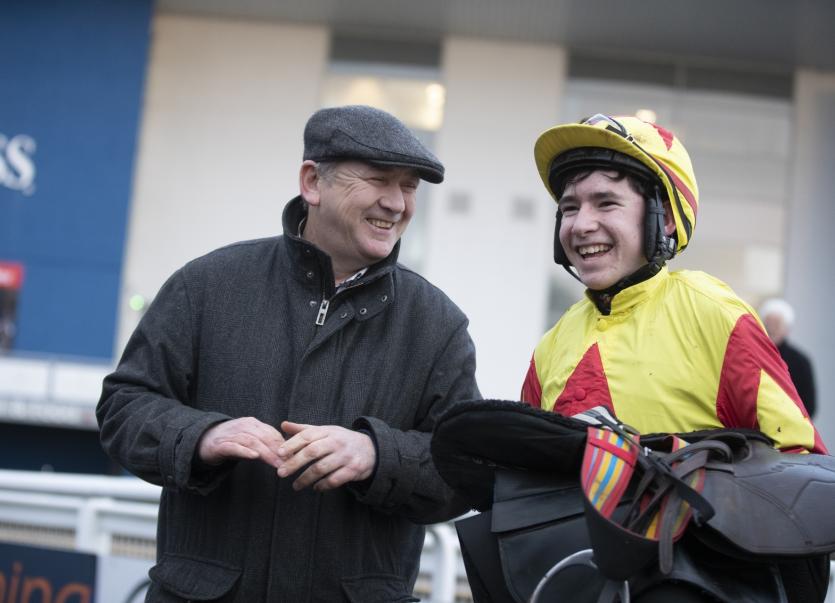 LIMERICK trainer Charles Byrnes was the toast of punters when landing his third successive win in the prized €150,000 Grade B Ladbrokes Hurdle at the Dublin Racing Festival at Leopardstown.

Ballingarry-based hurdler Byrnes saddled Thosedaysaregone to claim the big prize, the winner justifying plenty of market confidence in the process.

The Limerick trainer had taken the 2018 and 2019 renewals of the race with Off You Go and struck once again in the valuable two-mile event at the Foxrock venue on Saturday.

Available at 25-1 overnight with the bookies', Thosedaysaregone was sent off a 7-1 chance but looked to have plenty to do approaching the final flight of hurdles.

You Raised Me Up gained a narrow advantage on the run-in. However, he was trumped close home by Thosedaysaregone, who was produced with a brilliantly-timed late challenge by Kevin Brouder to gain a length-and-a-quarter success.

Afterwards a delighted Charles Byrnes said: “Dromlease Express won the race 16 years ago ridden by Johnny Allen, who is now champion jockey in Australia, and Off You Go won it the previous two years. They are all two-and-a-half-mile horses and that’s what you need for the race.

He might need a glass of water after that!

Another @jhracingcomm commentary classic as a stirring finish to the €150,000 Ladbrokes Hurdle goes the way of Thosedaysaregone for @brouderkevin18 & Charles Byrnes @LeopardstownRC

“I was going to go to Ascot but the English handicapper stuck him up 6lb for no reason, so I said I’d stay at home then.

“I thought if he was close enough coming to the last that he would be hard to beat. He loves nice ground as well, which was a plus.

“We’ll consider something like the Coral Cup and there is a big bonus there now, so that would twist my arm towards that race.

“He’s already won a chase so he can mix it in the future with handicap chases and hurdles.”

Betfair have Thosedaysaregone on offer at  20/1 for the Coral Cup and 25/1 for the County Hurdle at the Cheltenham Festival in March.

Saturday's win capped and excellent few days for the Byrnes family as amateur rider Philip Byrnes rode his first winner when partnering Vinnie Is Busy to a cosy success in the bumper at Limerick on Thursday.

The 16-year-old secondary school student, Philip, is son of Charles Byrnes. The teenage jockey rode 50 winners on the pony racing circuit, coasted to an eight and a half length win on the Anna Rowney-owned five-year-old, a 7/4 joint-favourite at Limerick Racecourse.

Charles Byrnes said: “Philip was 16 just before Christmas and he knew the horse very well and had ridden him in all his work. He knew what he was capable of.

"He spent two and a half years pony racing where he had 50 winners and he won the Dingle Derby in 2018. They get great experience at that, but this is a step-up riding against the big boys.”