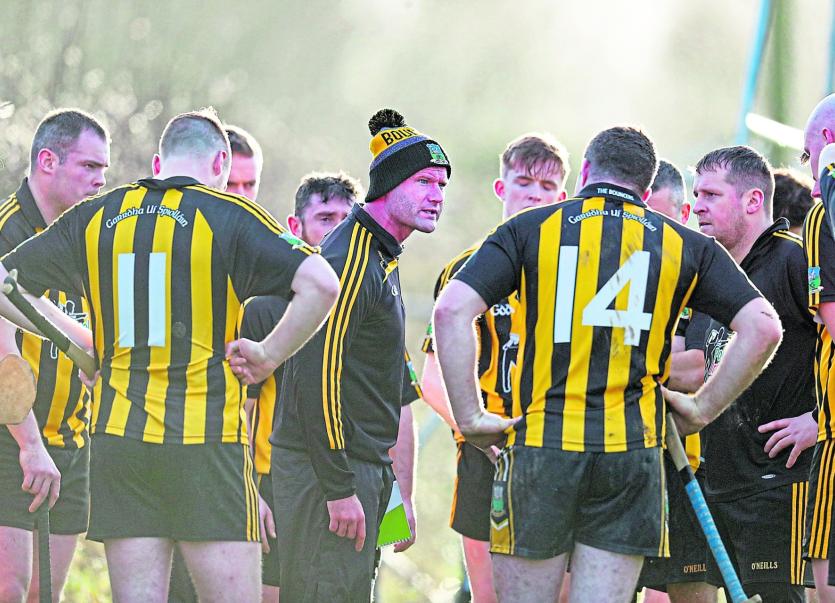 GARRYSPILLANE bid to reach an All-Ireland Junior B Hurling Final this Saturday.

Galway’s St Brendans of Loughrea stand between The Bouncers and a Saturday February 8 final against Dublin’s St Vincents.

But the south Limerick men will have to plan without free-taker Danny Hayes and Sean Kearney, who were both sent-off for separate incidents in injury time of extra time in the replay of their Munster final defeat to Tipperary’s Drom & Inch.

The men in black and amber will look to the experienced Micheal O’Donnell, the youthful Ciaran Sheehan as well as Stephen Meade, Raymond Sheehan and Jamie Morrissey.

Gary McCarthy was out injured last time out but could be ready to start in midfield.

Garryspillane are managed by Darren Hayes and David Dawson with James Ryan and Gearoid Power as coach-selectors.

In the 15th year of the Killeedy GAA club organised Junior B hurling competition, Garryspillane are bidding to become just the second ever Limerick winner of their All-Ireland title – Doon were 2015 winners.

Victory over Loughrea would see Garryspillane follow in the footsteps of Bruree, Rathkeale, Templeglantine and Cappamore in reaching the All-Ireland final. Cappamore lost to Oylegate-Glenbrien of Wexford in the final this time last year.

Tipperary lead the way in the All-Ireland Junior B roll of honour with four wins, while the champions of Galway and Kilkenny have three previous winners each, with two for Cork and one each for Limerick and Wexford.

Saturday’s semi final will be the 13th championship game for the men in black and amber, who lost to Bruree in the south final and then regrouped to defeat Tournafulla in the county final. After losing to Drom & Inch in the Munster final, they will now hope to regroup for the All-Ireland series.