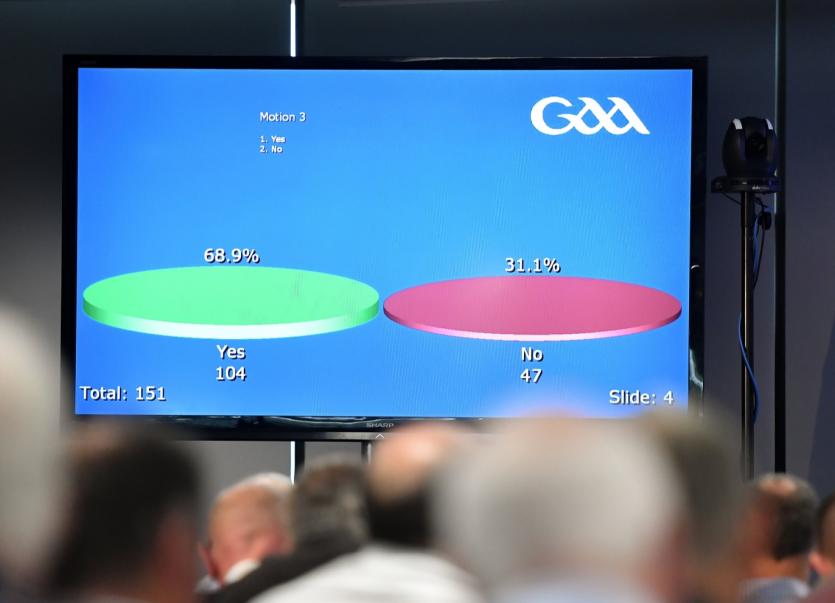 The result of Motion 3, regarding the Advanced Mark, which was passed by 68.9% to 31.1%, at the GAA Special Congress at Páirc Uí Chaoimh last October

IT’S early days but I can’t warm to the new Advanced Mark in Gaelic Football.

The infatuation with copying from a variety of other sports is getting tedious to say the least.

The constant need for change for the sake of change is doing little to improve the game and I’m not sure the new Advanced Mark is an improvement.

From what I have seen it’s simply adding more stoppages to the flow of the game. Were an Advanced Mark to be introduced I could perhaps agree if the player had to at least field the ball from a height – let’s say from over head height. At least then a skill is being rewarded but I can watch Aussie Rules if I want that.

As well as slowing down the game of Gaelic Football, the new Advanced Mark has the potential for more ‘set plays’ as managements and players get to grips with the nuisances of the new rule.

In my opinion, get the rules of Gaelic Football implemented fully and consistently across the board and then see what needs changing.

It’s okay to stand still for a little while surely, and attempt to perfect what is in place.

The one rule that does need to be borrowed from other sports is a count down clock to take away the time keeping duties from the referee – probably only applicable at inter-county level due to the technicalities of the change but it would add to the game rather than complicate.

But for now all eyes will remain on the continued development of the Advanced Mark in the coming weeks and I for one require a of convincing re it’s merits in terms of improving the overall game.