Desmond League Round Up: Abbeyfeale march on in Munster 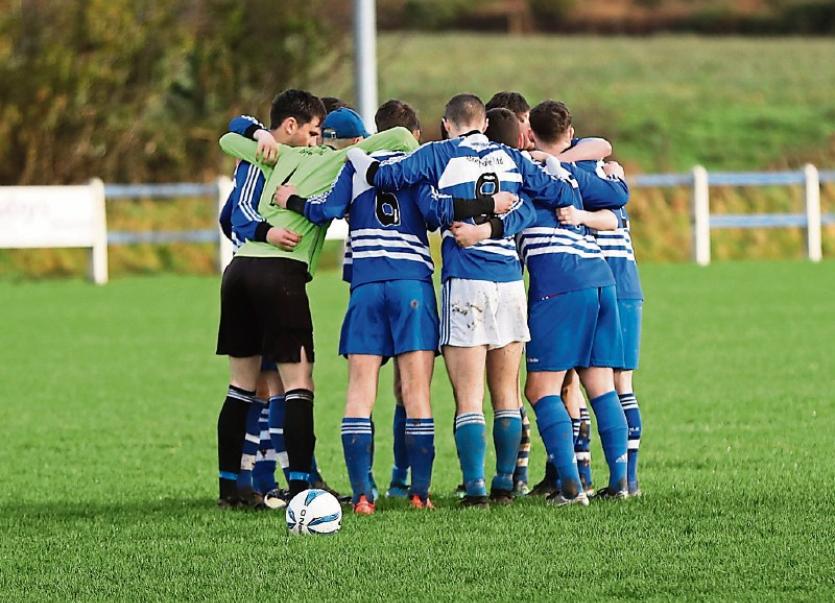 Abbeyfeale United are through to the last 16 of the Munster Junior Cup after coming from behind to win 2-1 at home to Carrigaline United, who are unbeaten in the top flight of the junior section of the Munster Senior League.

Although richly-deserved, the victory was achieved in dramatic fashion, Cormac Roche scoring from the penalty spot with the last kick of the game after substitute Thomas Smith’s shot had been handled on the line.

While Kevin Murphy’s consistent involvement in key moments made him Man of the Match, it is of course true to say that he wouldn’t have been afforded so many opportunities to hurt the opposition if it hadn’t been for the dominant performances throughout the field of his team-mates.

As always, Cormac Roche made the back four stronger by his presence, Fiachra Cotter matched his honesty as a person with the honesty of his unstinting workrate in the centre of midfield and Joe Kelliher, in his third different decade as an A-team player, showed that he still has much to offer in the number ten role.

Managers John Kelliher and Thomas Cahill know that they will experience stiffer challenges than that offered by Carrigaline, who, apart from the excellent goalkeeping of Baeanu and the attacking prowess of Ronan Connelly and O’Halloran, didn’t live up to their pre-match billing. Having said that, Abbeyfeale’s last 16 game on the 16th of February is at home to Wilton United, who are a division below Carrigaline in the junior section of the Munster Senior League.

If they win that game, they will be at home in the quarter-finals on the 8th of March to St. Michael’s if the holders win their last sixteen tie at home to Regional United B.

A 90th minute winner from Cork Business League side Doolan's Cow Bar denied a brilliant performance from Glin Rovers in the fourth round of the Munster Junior Cup.

The players left nothing on the field and all Glin supporters hope they can bring this performance to the domestic front. As for Doolan's Cow, they march onto the last 16 round against AUL opposition.

Ballingarry into last eight of Youths

Ballingarry will be away to Carrigaline United, who play in the Premier Division of the Cork Youths League, in the quarter-finals of the Munster Youths Cup after winning 2-1 in extra-time away to Waterford side, Ballinroad, on Sunday. Ballingarry led 1-0 at half-time thanks to Kieran Storin’s header from a corner and their extra-time winner came in the first period and was scored by Mike Molloy.

Askeaton earned a place in the semi-finals of the Riedy Cup by coming from 2-0 down after five minutes to win 3-2 at home to Shannonside FC. Darragh Ranahan pulled a goal back in the first-half, equalised in the 68th minute with a shot from outside the box and completed his hat-trick by lobbing the goalkeeper for the winner in the 88th minute.

Askeaton B made a good attempt at joining their A-team in the last four, taking hosts Shountrade to extra-time before losing 4-2. Paudie Kelly gave Shountrade the lead twice in normal time and their extra-time goals, scored late in the second period, came from Tim Frawley and Adam Reidy.

Two goals in each half gave Creeves Celtic a 4-1 victory away to Pallaskenry, for whom Michael O’Neill opened the scoring in the 14th minute.

Rathkeale moved into second place in the Premier Division when they won 1-0 at home to Broadford United with a second-half goal from Steven Power. Broadford have now lost their unbeaten status in the league, leaving Rathkeale and leaders Glin Rovers as the only two sides who have yet to suffer a Premier defeat this season.

Carrig Celtic are still awaiting their first league win after their 1-1 draw at home to Newcastle West Town, for whom Seoirse Joyce headed the opener in the 20th minute. Former Newcastle West player, Noel Callanan, equalised with a shot from the edge of the box on the half-hour.

There were no goals in the contest between Granagh United and Kilcornan, though both sides came close, Granagh’s Eoin Clifford hitting the crossbar twice in the second-half.

Breska Rovers maintained their six-point lead in Division 1 with a 3-2 victory away to Rathkeale B, for whom Cian Shorten opened the scoring in the 17th minute. Breska fought back with second-half goals from Josh Adams (2) and Ethan Keyes to take a 3-1 lead before Luke Murphy pulled a goal back for the home team in the 85th minute.

Second-placed St. Ita’s, who have a game in hand, kept up the pressure by winning 3-0 at home to Newcastle West Town Reserves with goals from Paul Fitzmaurice, TJ Kelly and Jack Loughran.

Glantine regained top spot in Division 2 by recording a 1-0 victory at home to Mountcollins on Saturday night. The goal was scored in the second-half by Evan Larkin.

Broadford United Reserves and Athea United shared six goals evenly. Broadford took a 2-0 lead with a brace from young Kenny Lynch and Athea player-manager Cillian O’Connor pulled a goal back before half-time. Mark Horgan equalised in the second-half. John O’Gorman put the home team back in front and Brian O’Connor ensured a share of the points in the 80th minute.

Carrig Celtic B scored a last-minute equaliser to earn a point in a 2-2 draw away to Breska Rovers B, whose goals came from an own goal and Orin Garvey.

For more see limerickleader.ie or see #LLSport on social media.