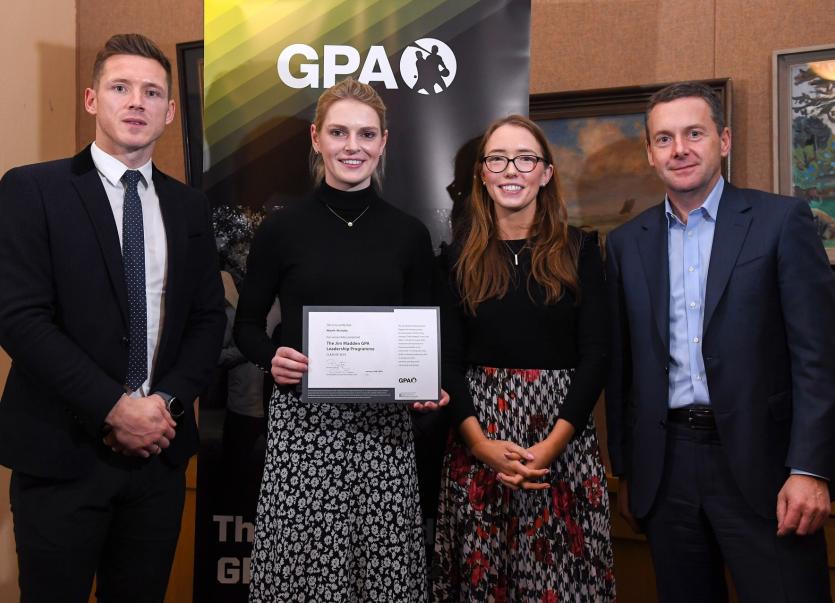 Limerick’s Niamh Mulcahy and Mairéad Kavanagh were part of the latest group of inter-county players from all over Ireland who graduated from the Jim Madden GPA Leadership Programme at a special ceremony at Maynooth University on Friday, January 24th.  21 players representing the Gaelic Players Association (GPA) and 10 players representing the Women’s Gaelic Players Association (WGPA) from 21 counties in total made up the Class of 2019.

A further 13 GPA members, including former Limerick footballer Ian Ryan, and 6 members of the WGPA, graduated from the Special Purpose Award in Professional Leadership.  This is an optional accreditation pathway for those who have already completed the initial programme and is awarded by Maynooth University through the Department of Education.

The Jim Madden Leadership Programme has been developed specifically with inter-county players in mind.  The tailored programme sees students paired with a professional life coach with whom they work to address their individual development needs.  Participants gain skills which they can draw on in their personal, sporting and professional lives.

The programme has been made possible through the support of Michael Madden and his family who have dedicated this programme and curriculum to the memory of their late father Jim, who was a tireless grassroots GAA and community activist in Tipperary.

2020 will be the sixth year of the programme with a further 33 players including Caoimhe Costelloe and Michael Ryan, starting out.  The programme consists of a leadership masterclass, development centre workshop, personal and interpersonal leadership workshops, group leadership skills workshop and a community project.

Speaking at the graduation Paul Flynn, CEO of the GPA, said; “The work we carry out at the GPA comes under three key pillars; welfare, development and representation.  This graduation shows once again how we are having a positive impact in the development of players as we continue with our aim of helping them develop on and off the field.

“In total there are 83 individuals from 28 counties involved who will benefit from the support of the GPA and WGPA, between those graduating and those just starting out on the programme.  It’s a testament to the success of the programme and that would not be possible without the ongoing support of the Madden family who we once again thank most sincerely.”

Maria Kinsella, WGPA Chairperson added; “It is great to be part of the 16 WGPA members who are graduating and also to see another 12 ladies footballers and camogie players starting out on the programme.  The Jim Madden GPA Leadership Programme is massively beneficial and I can testify to that from my own personal experience.

“The WGPA always strive to support players to achieve their potential both on and off the field. It’s great that we can offer this support to our players and is one of the many ways in which we work closely with the GPA in what is an ever-strengthening relationship.”

Presenting the awards, Dean of the Faculty of Social Science at Maynooth University, Dr Mark Maguire said; “Everyone at Maynooth University is very proud to be able to support inter-county players and we are delighted with the continued success of this Leadership Programme. Our Leadership Programme Accreditation Pathway develops the skills required for future leaders to unlock their full potential and to pursue further education.”

Michael Madden, sponsor of the Jim Madden Leadership Programme, said; “We are delighted and honoured with the success of the Jim Madden Leadership Programme over the last five years. We are proud that the programme was inclusive from launch involving both the GPA and the WGPA, the impact and outreach to thousands of primary school children and the participants’ dedication and commitment to the programme each year. The professionalism and dedication of the GPA and WPGA made it an easy decision for the Madden family to extend the support for an additional two years.”

Over 140 GPA and WGPA members have graduated from the Jim Madden Leadership Programme since its inception.

The Jim Madden GPA Leadership Programme was founded in 2014 in memory of Jim Madden. Jim, a committed GAA and community leader from the village of Portroe in county Tipperary, was passionate about developing players across hurling, football and camogie.  Advocating and encouraging participation by all in the community and recognising the importance of GAA players as role models.  Jim had a love for all sports especially the GAA and enjoyed success at all grades as a player, selector and manager with his club Portroe.  Jim was a selector with the Tipperary Senior Camogie team when they won their first ever All-Ireland championship in 1999 and was a selector for two further All-Ireland's in 2000 and 2001 completing an historic three-in-a-row.  His three daughters all played camogie for Tipperary with his daughter Claire wining five All-Ireland senior camogie championships.