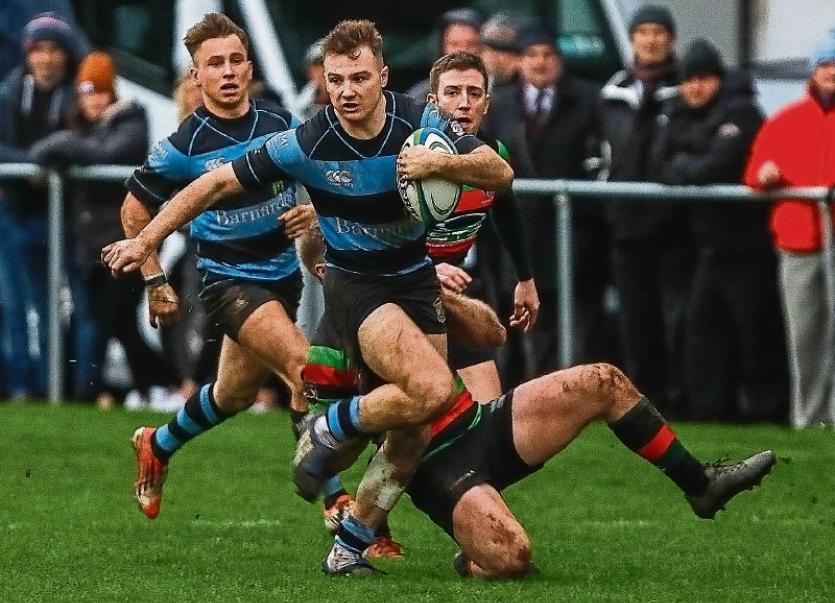 THE Energia All-Ireland League resumes this Saturday when Limerick’s seven six clubs go in search of precious points. In Division 1A, second-placed Garryowen make the trip to Cork to face eighth-placed UCC at the Mardyke, 2.30pm.

Garryowen moved five points clear of third-placed UCD in the battle to secure a play-off place following their recent 40-14 bonus point win over the Dublin students at Dooradoyle last time out.

The Light Blues, who led 20-7 at half-time, had a brace of tries from Munster hooker Diarmuid Barron and Munster winger Alex Wootton, while Liam Coombes also dotted down.

Also in the top flight on Saturday, seventh-placed Young Munster host basement side Ballynahinch in a crucial fixture at Tom Clifford Park.

Munsters’ remained just three points clear of the bottom three sides in the table, after suffering an 18-3 reverse at the hands of Cork Constitution in their most recent fixture.

Despite suffering back-to-back league defeats to Cork Con in recent weeks, Munsters’ are also on the fringes of the top four play-off places in 1A, five points behind fourth-placed Lansdowne.

Saturday’s opponents Ballynahinch are level on points with ninth-placed Dublin University and UCC in eighth in the relegation race.

In Division 1B, promotion-chasing Shannon face a trip to Dublin to take on St Mary’s College at Templeville Road.

The Parish side sit in fifth place in the table, just a single point behind third-placed Old Belvedere and fourth-placed Banbridge in the wake of their recent 31-13 bonus point home victory over high-flying Highfield.

Shannon led 17-10 at half-time in the wet conditions, thanks to two tries from Jamie McGarry and Eathon Moloney, while the exciting Jake Flannery added seven points with the boot.

A second try from full-back McGarry on 56 minutes, which was also converted, pushed the Parish side's lead out to 24-13.

McGarry turned provider for Shannon's bonus point try on 75 minutes when he got the ball out to Ikem Ugwueru to dot down in the corner. Replacement John Bateman added the extras superbly from the touchline.

Crescent edged past Buccaneers 12-10 at Dubarry Park last time out. The Limerick side is just one point behind second-placed Rainey Old Boys with eight rounds of regular season fixtures to go.

Crescent scored two tries in their win over Buccs’ through Lorcan Kavanagh and an intercept try from the in-form Val McDermott, while Maccon Casserly also added one conversion.

Also in Division 2A on Saturday, seventh-placed UL-Bohs make the trip to Cork to face struggling Dolphin at Musgrave Park.

The Annacotty side now sit a full eight points clear of the relegation play-off position.

Finally, in Division 2C, Bruff host Clonmel in a crucial fixture at Kilballyowen Park. Ninth-placed Bruff suffered a frustrating 13-3 defeat to Tullamore last time out. Bruff are level on points with seventh-placed City of Derry and Bangor in eighth.

Bruff have a five point cushion over bottom side Midleton ahead of their crunch clash with Clonmel.