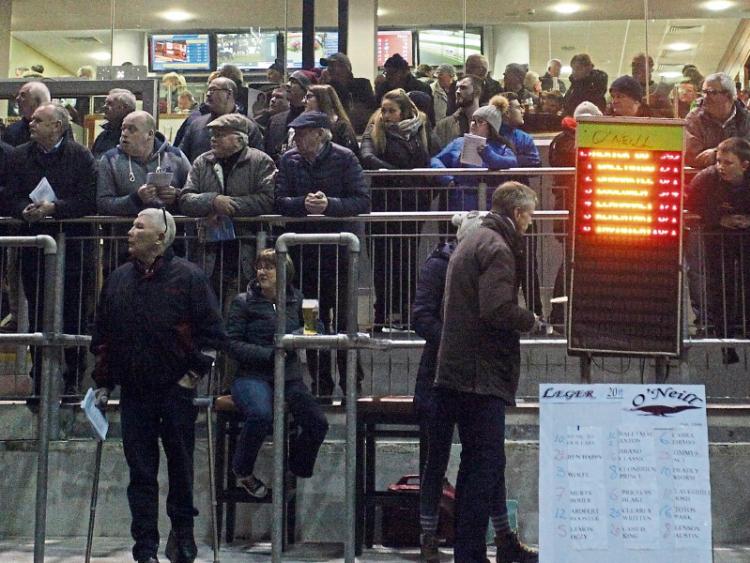 THERE were two finals in Limerick Greyhound Stadium last Saturday.

Curtin had Barrack Henry as the ON3 525 winner with a length to spare on the line. The winning time was 29.24. Beaten into second was Ted Curtin and Garrett Barry with Parody.

The other final was won in 29.07 and by a length and three quarters. Murphy won with Mongys Rocket. Second was the Denis O’Malley trained Rallying Joy for the Rallying Racing syndicate.

The card opened with semi finals in an ON3 535. Fastest into the final was Barrack Jake for Shane Curtin. The winner’s time was 29.53. Also into the final from this semi final was David Carroll’s Tyrap Ferage and James Roche’s Lurriga Lowry.

The other semi final was won in 29.58 by Tuttles Jill for the Fly Me To The Moon syndicate. Second was Sharavogue for the Mary Ellens Gang syndicate, while third was James and Eileen Roche with Lurriga Owl.

There was an A9/A10 525 win for Elms Three. Owned by Martin Butler and Michael O’Meara the winner had a length to spare in a time of 30.23. Beaten into second was Stakers Jet for Maureen O’Connor.

James Kelly had an A6 525 winner with Gurtnacrehy Hope. The winning time of 29.18 secured a four and a quarter length success. Second was Patrick Moloney with Solid Fabinho.

Ted Curtin won with Knowing Glance in an A5/A6 525. The winner was seven lengths clear in a time of 29.69. Second was Cold Smoke for Declan Beary.

William Casey won with Inislosky Romeo in an A4 525. The winning time was 29.99. Just beaten into second place was Timaru Cha for Phil and Fionnuala Moloney.

There was an 11 racecard on Thursday.

The night opened with an A4 525. Success went to Air Pilot for Carmel Hennessy. Trained by Eugene Corkery the winner had two and a half lengths to spare in a time of 29.23. Second was Take Control for Michael O’Grady of Mungret.

Gearoid Kelly had Groovy Hannah as an A7 525 winner. In 29.56 the winner was five lengths clear on the line. Second was Tiger Flash for Patrick Neville and David Benn.

Kish Derry won for Timothy Keane of Shannon in an A6 525. The winner’s time was 29.67. Just beaten into second place was Drombully for David O’Riordan of Dromkeen.

There was an A4 525 win for Beron Magoo for the Roberts-Blamires partnership of O’Briens Bridge. The winner was a length clear in a time of 29.59. Second was Knockfinisk Mick for Timmy Murphy and Phyllis Daly of Athea.

Templeglantine’s Christine Taylor won an A6 525 with Bound Tobe Foxy. The winner was three lengths clear in a time of 29.48. Second was Bruree’s Mary Lynch with Bright Ava.

Cathal Gleeson won with Gleesons Dream in an A5 525. The winner was six and a half lengths clear in a time of 29.61. Second was Bookies Bicycle for Lorna and Maureen Steed.

Murroe’s Willie Kett had Vote Local as an A5 525 winner. The winner’s time was 29.63 with two lengths of a winning margin. Second was Tiermana Sherry for Noel Moroney of Ennis.

Doon’s Patrick and Aoife Coffey won with Fred Hates Buses in an A3 525. The winner had a length and a half to spare in 29.34. Second was Liscanny Skipp for Emma O’Ryan.

The Denis O’Malley trained Finnure Storm won an A1 525 for the Finnure Storm syndicate. The winning time was 28.95. Beaten a length and three quarters into second was Caulry River for Mary Ellens Gang syndicate.

The final race of the night was a sprint – won in 19.37 by Dromsparky for David O’Riordan. The winner was three and a half lengths clear of White Hole for Gerard Ryan of Dromkeen.