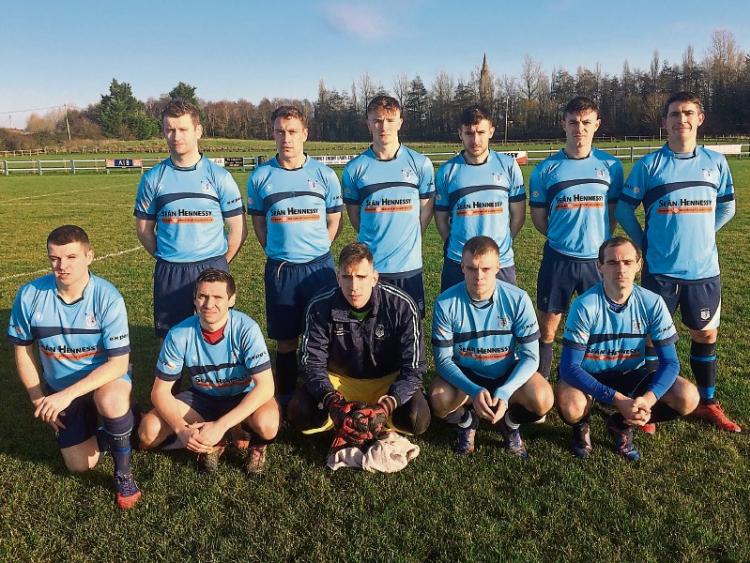 Rathkeale bounced back from their Munster Junior Cup defeat by Abbeyfeale United by picking up three points in their defence of their League title with a 3-1 victory at home to Carrig Celtic.

They led 1-0 at half-time through an own goal and their lead became much more comfortable when Keith Harnett and Mikey Morrissey got on the scoresheet. Francis Moore scored a consolation goal for Carrig late on.

Carrig are now joined on one point by Adare United who had a scoreless draw against Granagh United in the Adare astro pitch on Friday night.

Breska Rovers remain six points clear in Division 1 after their 4-1 victory at home to Shannonside FC. They led 2-1 at half-time, their opener coming in the second minute when goalkeeper James Purcell converted a penalty. Ethan Keyes scored the second four minutes later. The second-half goals were scored by Keyes again and Josh Moloney.

Second-placed St. Ita’s recorded a 1-0 victory at home to Shountrade thanks to an 80th minute own goal.

One-nil was also the score when Rathkeale B won away to Creeves Celtic. A super goal it was too, a second-half free-kick from Cian Shorten.

Pallaskenry, who have games in hand on the three teams above them, had to come from behind to secure a 1-1 draw at home to Kildimo United, whose 50th minute opener came from the penalty spot. Aaron O’Donovan levelled in the 85th minute with a great 25-yard strike into the bottom corner.

Glantine lost their place at the top of the Division 2 table when they were beaten 1-0 at home by Abbeyfeale United B on Saturday night. The goal was scored in the first-half by Joe Weir, who continues his hot scoring streak. That was Glantine’s second league defeat of the season and both have been against Abbeyfeale B.

Glantine are now a point behind new leaders, Askeaton, who won 4-1 away to Mountcollins. They led 1-0 at half-time through John O’Shaughnessy. Darragh Ranahan doubled their lead and James Brouder pulled a goal back for the home team in the 80th minute. However, Askeaton put victory beyond all doubt in the last five minutes with two more goals, scored by Jordan O’Connell and Mark Ranahan.

Glin Rovers B are joint third with Abbeyfeale United B and Athea United after their 3-0 victory away to Carrig Celtic B, the goals scored by Cian Culhane (2) and Padraic O’Connor. Brian O’Connor earned a point for Athea when he equalised in the 42nd minute after Josh Moloney had headed visitors Breska Rovers B in front in the 15th minute.

Broadford United Reserves, who have enough games in hand to pass out all five teams above them, won 3-2 away to Askeaton B, whose goals were scored by Alex Ryan and Tomas Sheahan.

Ballingarry kept their Youths League title hopes very much alive when they came from behind twice to win 3-2 away to Newcastle West Town. Both equalisers were scored by David Geary and Adam Hickey netted the winner in the 65th minute.

A goal in each half, scored by Cathal McCoy and Oisin Woulfe, earned Abbeyfeale United a 2-0 victory away to Athea United.

The Limerick Desmond League’s two representatives in the last 32 of the Munster Junior Cup, Abbeyfeale United and Glin Rovers, both face tough Cork opposition on Sunday. Also on Sunday, Ballingarry are away to Ballinroad from the Waterford League in the fourth round of the Munster Youths Cup.

Carrigaline play in the Premier Division of the Junior section of the Munster Senior League. While they are the club’s second-string side, the first team playing in the Premier Division of the Senior section, they are highly-rated. They are currently unbeaten in the League, with seven wins and one draw. They are a young side, featuring some players who were part of the Youths team who won the Munster Youths Cup last season. Experience is offered by a couple of players who came down from the senior team. They are part of a very progressive club, who were named FAI Club of the Year last season.

Abbeyfeale didn’t have the ideal preparation for this difficult encounter when their game in Kilcornan last Sunday was called off just before kick-off due to a frozen pitch.

However, they went for a good training session instead and, no doubt, they will be well prepared by managers John Kelliher and Thomas Cahill. They will benefit from the tough game they were given by Rathkeale in the third round a couple of weeks ago, which they won on sudden-death penalties.

They had a good spine that day, with Cormac Roche and Peter Browne commanding in the centre of defence, Fiachra Cotter and young Dylan Quirke forceful in the centre of midfield and skipper Kevin Murphy threatening in his number ten role through his runs with and without the ball.

Playing at home is always an advantage but that may be the case even more so on this occasion as Carrigaline play most of their games on astroturf. The club’s two full-size pitches are both astro, while most of the other clubs in the league also play on all-weather.

With the surface in their favour and with the backing of the home supporters, Abbeyfeale might just be good enough to overcome this difficult challenge and advance to the last sixteen.

Doolan’s Cow play in the Premier Division of the Cork Business and Shipping League. Since winning the League for the first time in 2015-16, they have won two more since, including last season. As League Champions, they were entered in the Munster League Champions Trophy and victory over Lismore of Waterford has earned them a semi-final against Rathkeale.

They are bottom of the table at the moment but that is because they have played only one game, which they won.

Their League inactivity is obviously because of their busy Cup schedule, which eased a little last Sunday week when they conceded a last-minute goal to lose 3-2 at home to Westport United in the 6th round of the FAI Junior Cup.

There is great spirit in the side, with most of the players having been involved in the successes of the last four seasons, including the domestic quadruple in 2016-17.

However, no matter how spirited they are they won’t get the better of Glin in that department. Now managed by Ambrose Lanigan, who is assisted by Anthony Collins and Shane Culhane, Glin have long been famed for their togetherness.

They have much to feel proud about at the moment, unbeaten and three points clear at the top of the Premier Division table. Centre-half Tadhg Culhane is an injury doubt and he would be a loss as he impressed in the third round victory against Granagh United. Others to excel that day were central midfielders, Darren Sheehan and Gary Culhane, along with left-sided midfielder, Shane Culhane.

The game will take place in the Mayfield Community all-weather pitch and that surface will be an advantage for Doolan’s Cow, which might just be enough to tip the tie in their favour.

There is another big game on Sunday, when Ballingarry travel to Waterford to meet Ballinroad in the fourth round of the Munster Youths Cup, with a place in the quarter-finals at stake. Ballinroad play in Youths B of the Waterford League and currently boast a record of six wins, two draws and just one defeat. En route to this stage of the competition, they have had away victories against Waterford Bohemians, Mooncoin Celtic and Johnville.

Ballingarry have beaten Granagh United, Broadford United and St. Ita’s, all of whom are performing well in the League. The Broadford scalp was particularly notable as they reached the semi-final last season. Ballingarry are going well in the League themselves, with four wins and one defeat from five games. Among their key players are centre-back Ciaran Tagney, central midfielders Josh Quille and Darragh Casey and strikers Mike Molloy and David Geary.

This is likely to be a close contest and, once again, I think that home advantage, may prove decisive.