Limerick Desmond League Round Up and Preview : Abbeyfeale through on spot kicks 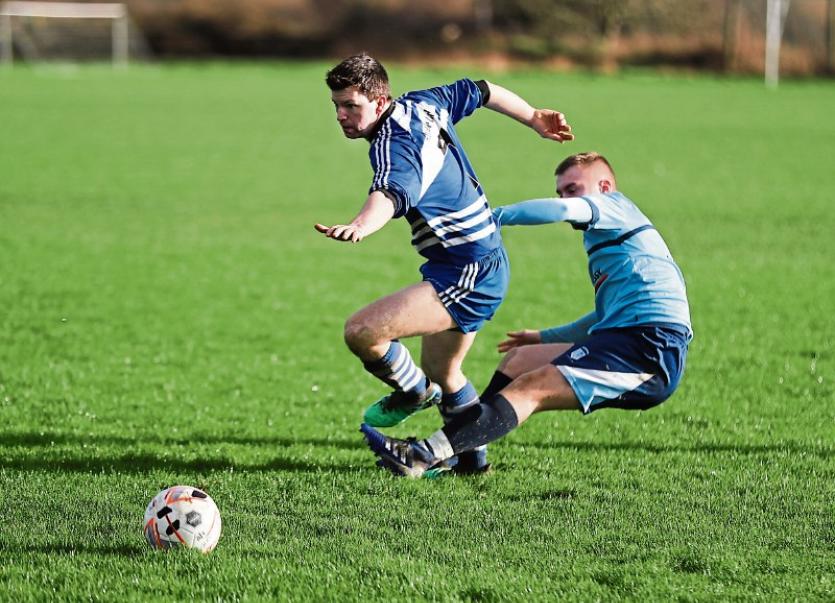 Abbeyfeale United will be at home to Carrigaline United from the Munster Senior League in the fourth round of the Munster Junior Cup next Sunday week after their sudden-death penalty shoot-out victory at home to Rathkeale on Sunday morning.

Abbeyfeale would have been devastated if they had lost this tie as they should have been ahead at half-time and went 2-0 up with a Cormac Roche penalty and a Liam Collins cross inside the opening thirteen minutes of the second-half.

Rathkeale, after being outplayed for much of the first-half, rallied and pulled a goal in back in the 66th minute with a diving header from Keith Harnett and then equalised in the 89th minute when substitute Cian Shorten converted a penalty. Rathkeale were the better team in extra-time.

Abbeyfeale thought they had won it in the last minute of extra-time when Billy Quirke headed a high ball from TJ Lane to the back of the net but referee Pat O’Connor adjudged that he had fouled goalkeeper Colin Barry and gave a free out.

Abbeyfeale had a chance to win the shootout in regulation kicks, having scored their first four through Fiachra Cotter, Paudie Murphy, Cormac Roche and Tommy Smith, while Rathkeale had conversions by Enright, Cathal Cummane, Barry Coleman and Shorten but a miss by Darren Jones in their second penalty.

Barry Sheehy was the player with the responsibility of taking Abbeyfeale’s fifth and putting them through to the next round but, perhaps because he was just back from a long layoff through injury, he fired over the angle of bar and post.

Only one round of kicks was required in sudden death. Ian Hickey’s kick was brilliantly saved by Collins and Billy Quirke finally got Abbeyfeale over the finishing line when he calmly slotted past Barry.

A penalty shoot-out can go either way but no this occasion it favoured the team that deserved to win as Abbeyfeale had been on top for most of the game. Now they need to do their homework on Carrigaline and, more importantly, work on building on the quality of their possession play in the middle third to become more clinical in the final third.

As for Rathkeale, they have another big provincial game to focus on, their upcoming Munster League Champions Trophy semi-final against Doolan’s Cow from the Cork Business and Shipping League. Rathkeale won’t be in any rush to play that game as they await the return to action of striker Ahern, who will be out for 4-6 weeks with the shoulder injury he suffered last Sunday.

AND THEN THERE WERE NONE

The Limerick Desmond League will have no further direct interest in the FAI Junior Cup after their last remaining representatives, Carrig Celtic, bowed out in the sixth round last Sunday, beaten 3-0 away by Kilkenny District League side, Newpark FC.

Carrig got off to a bad start when the home team opened the scoring in the 5th minute, scoring in a counter-attack after Seanie King had hit the crossbar. Newpark then scored from a free-kick to lead 2-0 at half-time. Carrig had plenty of possession in the second-half but couldn’t get the breakthrough they needed and Newpark scored their third in a counter-attack late on.

Glin Rovers are three points clear at the top of the Premier Division after coming from 2-0 down to win 3-2 at home to Newcastle West Town. Tommy Culhane pulled a goal back just before half-time and Tadhg Culhane equalised on the hour. The winner came in the form of an own goal in the 80th minute.

Broadford United moved into joint second with Abbeyfeale United when they won 5-0 at home to Adare United. They led 2-0 at half-time with goals from Darren Murphy and Jamie Keane. Striker Keane scored again in the second-half, with Brian Ahern also bagging a brace.

Kilcornan moved into the top half of the table with a 2-1 victory at home to Ballingarry. Anthony Cregan opened the scoring with a header from a corner and Ken O’Donoghue doubled the lead on the stroke of half-time with a 30-yard free-kick. Josh O’Connor pulled a goal back on the hour.

Creeves Celtic moved out of the Division 1 relegation zone with a 1-0 victory at home to Newcastle West Town Reserves, the goal scored by Andrew White.

One-nil was also the score between Knockaderry and Shountrade, Liam O’Gorman scoring for the home team in the 35th minute.

Glantine missed out on the chance to go four points clear at the top of the Division 2 table when they were pegged back to a 3-3 draw after leading 3-1 away to Athea United, whose goals were scored by Cillian O’Connor, Peter O’Connor and Brian O’Connor.

Glin Rovers B moved into a mid-table position by winning 4-2 away to Breska Rovers, for whom Josh Moloney scored both goals. The Glin goals came from an own goal, Johnny Sullivan (2) and Ollie Wallace.

St. Ita’s had been leading the Youths League, either on their own or jointly, since the opening day of the season but they were passed out on Saturday by Askeaton, who went two points clear after winning 6-0 at home to Athea United. Joey Rushe netted a hat-trick and the other scorers were Tomas Sheahan, Niall O’Connor and Yanek Sheehy.

Reigning Champions, Broadford United, remain in the title hunt after their 5-2 victory at home to Pallaskenry, who opened the scoring in the 5th minute. The home team responded in blistering fashion to lead 5-1 at half-time with a Jamie Keane hat-trick and a brace from Alan Power.

Mountcollins transferred their game against Newcastle West Town to Woodfield when their own pitch was unplayable and returned home with a 7-1 defeat. The scorers for Newcastle West were Eddie Ward (2), Rob Szebeni (2), A