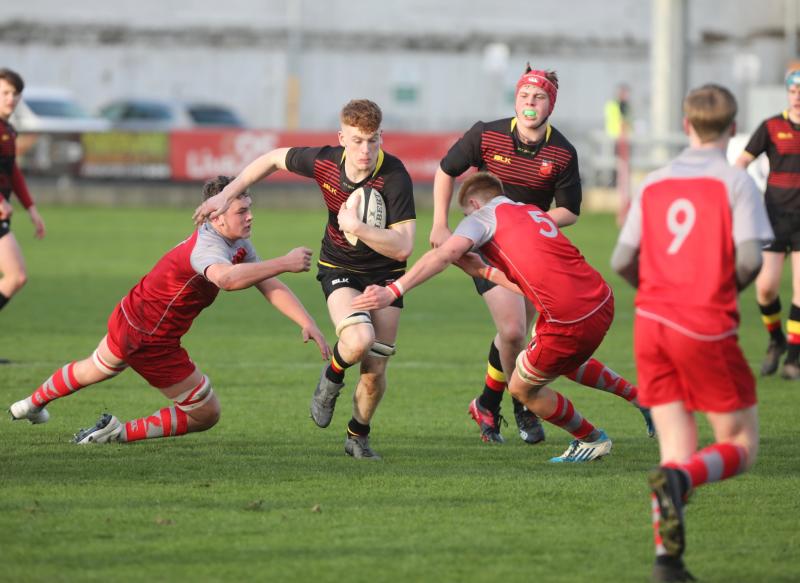 CLINICAL Árdscoil Ris powered their way into the second round of this season's Clayton Hotels Munster Schools Senior Cup when easing past 2018 winners Glenstal Abbey 27-10 in their first round tie played in ideal conditions at the Markets Field this Wednesday afternoon.

Ardscoil outscored their opponents by four tries to one to run out deserving winners and set up a second round meeting with local rivals St Munchin's College in two weeks' time.

This was entertaining tie as both side looked to play open, expansive, running rugby whenever possible in the favourable conditions. The Limerick rivals also showed signs of benefiting from each playing four competitive fixtures before Christmas in the new-look round robin phase of the competition.

After a lively opening from both sides, Glenstal took an eighth minute lead when full-back Taylor Gleeson landed a penalty goal from outside the '22 after Ardscoil were pinged for drifting offside.

Ardscoil hit back quickly and drew level in the 13th minute when centre Alex O'Halloran converted a penalty goal after Glenstal, whose head coach in former Exeter Chiefs captain and current UL-Bohs assistant coach Tom Hayes, were penalised for an offside offence.

The North Circular Road side came close to scoring the game's opening try, following a fine break up the left touchline by winger Eoghan Collins. However, Collins was ultimately denied by an excellent cover tackle.

Ardscoil would not be denied for long, however, and after the Glenstal defence failed to deal with a neat grubber kick in behind their defence, the city side struck for an opportunity try through James Hourigan.

Centre O'Halloran duly added the conversion for a 10-3 advantage to Robbie Bourke's side.

Within two minutes Ardscoil Ris had their second try of the game when powerful number eight Jack Ward-Murphy made a rampaging run from the half way line, outstripping the Glenstal defence, to score a terrific individual try.

The conversion attempt flew narrowly side, but the city side now enjoyed a significant 15-3 lead.

To their great credit, Glenatal Abbey responded superbiy, scoring a terrific try of their own through following a smashing backline move which was finished off by left winger Darragh Hanley.

The see-saw nature of the scoring continued, however, when Ardscoil Ris struck for their third try of the game in the left corner just before half time through flanker Ben McEnery to lead 20-10.

Ardscoil maintained their 10-point buffer at the change of ends, increasing the significance of the first score of the second period.

That score fell to Ardscoil mid-way through the half when captain John Moloney dotted down, benefitting from a well-timed off-load deep inside the Glenstal '22. Moloney also converted his own try to stretch the city side's lead to 27-10.

The scoreline remained the same until full-time as Ardscoil Ris progressed to the next round, while Glenatal Abbey bow out of the Senior Cup.