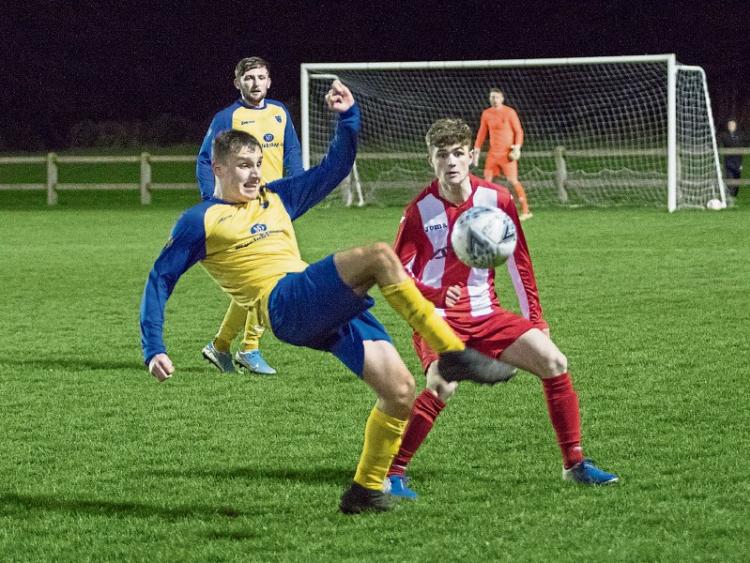 Granagh United recorded their first League win of the season when they recorded a 4-1 victory at home to Carrig Celtic on Sunday, their goals scored by Mark Tierney, Kieran O’Donovan and Alier Ajoung. The win moves Granagh out of the relegation zone, in which they are replace by Carrig, who were surely hoping for better preparation for their FAI Junior Cup game against Newpark FC in Kilkenny next Sunday.

Athea United Moved into third place in Division 2 with a 3-2 victory away to Breska Rovers B. Their goals were scored by Ger Ahern (2) and Ger Collins, while Leonard Coughlan and Josh Adams were on the mark for Breska B.

Mountcollins received a walkover from Carrig Celtic B.

Creeves Celtic, Askeaton and Newcastle West Town Reserves have all advanced to the semi-finals of the Riedy Cup. Creeves won 3-2 at home to Broadford United Reserves with goals from Richard Hayes (2) and Seamus Mangan. Goals from Sean Whelan and Jordan O’Connell had Askeaton 2-0 up at home to Abbeyfeale United, for whom Joe Weir pulled a goal back in the 87th minute. Newcastle West Town Reserves won 4-1 on penalties after a 1-1 draw away to Rathkeale B. The home team led at half-time and James Guina scored the equaliser. Dara Quilligan, Andrew Nix, James Guina and Mike Martin were the successful takers for NCW in the shoot-out.

Shannonside were leading 4-0 at home to Breska Rovers with goals from Mike Sillery, Senol Yamac, Stephen O’Connell and David McDaid but the game was abandoned in the 78th minute due to an accidental injury to referee Tony Fitzmaurice.

Youths leaders, St. Ita’s, were held to a scoreless draw at home to Abbeyfeale United and their lead is now down to a single point, ahead of Askeaton, who have a game in hand. Niall O’Connor scored a hat-trick for Askeaton in their 5-1 victory at home to Mountcollins, while Joey Rushe weighed in with a brace. Third-placed Granagh United won 4-2 at home to Pallaskenry with goals form Liam Kelliher (2), Ryan Fitzgibbon and Frankie Barrington.

There are two big Cup games on Sunday. Carrig Celtic, the League’s sole remaining representatives in the FAI Junior Cup, are away to Newpark FC from the Kilkenny League in the 6th round, while Abbeyfeale United take on Rathkeale for the right to host Carrigaline United from the Munster Senior League in the last 32.

Newpark FC play in Division 1 of the Kilkenny League, having been relegated from the Premier a couple of seasons ago. They have only two league games played so far this season, winning both. They reason for their relative league inactivity is that they have been busy in the Leinster Junior Cup, only eliminated last Sunday when they were beaten 1-0 by highly-rated Freebooters. They have a couple of players in the Kilkenny squad which topped their group in the Oscar Traynor Trophy. They are in a rebuilding phase and have some good players.

Carrig certainly didn’t’ have the ideal preparation for this game when they were beaten 3-1 away to Granagh United last Sunday, a result which drops them into the relegation zone. While Carrig have only one point to show from their four league games, they have been a different proposition in this competition, with victories against Rineanna Rovers, Kilcornan, Killarney Athletic and Newport Town in the previous four rounds.

Seanie King and Noel Callanan scored in the 3-2 victory at home to Newport in the fifth round and the management team of Paul O’Connor, Alan Moloney and Pa O’Sullivan will hope that this can produce the goods and goals again on Sunday, with midfielder John Hayes and centre-half Anthony Molyneaux also expected to play big roles. Carrig almost report a clean bill of health, the only doubt concerning Sean Kelly, who has a hip injury.

All four of Carrig’s victories in the earlier rounds were at home. However, they have done well on their travels in this competition before and I believe that if they are at their best, which they surely will be, they will be good enough to advance to the last 16 in Ireland.

Abbeyfeale United haven’t played a competitive game since they won 2-0 at home to Carrig Celtic on the 24th of November. Since then, Rathkeale have reached the semi-finals of the Munster League Champions Trophy with a 6-0 victory at home to Dunmanway and were beaten 4-1 in 5th round of the FAI Junior Cup by Rush Athletic in Dublin in the middle of December.

Both sides were well represented in the Oscar Traynor team that lost to Clare last Saturday evening. Rathkeale had four starters in striker Pa Ahern, midfielder Gary Enright and the O’Shea brothers, Sean and Alan, in defence. Abbeyfeale made up the right flank with full-back, Cormac Roche, and wide midfielder, Kevin Murphy, while Fiachra Cotter came on as a substitute in the centre of midfield around the hour mark.

Alan O’Shea hobbled off injured midway through the first-half but manager Alan Doyle is hopeful that he will be recovered for Sunday. He will be a loss if he’s not fit to play as he is a driving force for Rathkeale.

As was the case in the 1-1 draw between the sides in Rathkeale at the beginning of October, there is expected to be little between the sides as usual and I give a narrow vote to Abbeyfeale purely on the grounds of home advantage.

The Limerick Desmond League didn’t get the draw they needed to top Group C of the Oscar Traynor Trophy on Saturday night when they were beaten 2-1 in Mick Hanley Park by the Clare League, who win the group and go into the quarter-finals with home advantage.

The consolation for Limerick Desmond is that they qualify as runners-up.

The scoreline is an accurate reflection of the game as Clare were just about the better team, with Limerick Desmond failing to hit the heights that they did in the fantastic 4-0 victory at home to Limerick District in their last competitive outing at the beginning of November.

Limerick Desmond manager, Jim Neenan, and his assistants, Tom Kelly, Gary Egan and Tomas Lane, will be disappointed at this performance, as will the players. All concerned know they can do better and that will be the objective when they travel for their quarter-final against as yet unnamed opponents.

As for Clare and their manager, Shane Keegan, the news is all good. They were in third place in the group before the game started but finished top of the pile after a polished and resolute performance. They have to be given a serious chance of following up on their back-to-back successes of 2016 and 2017.