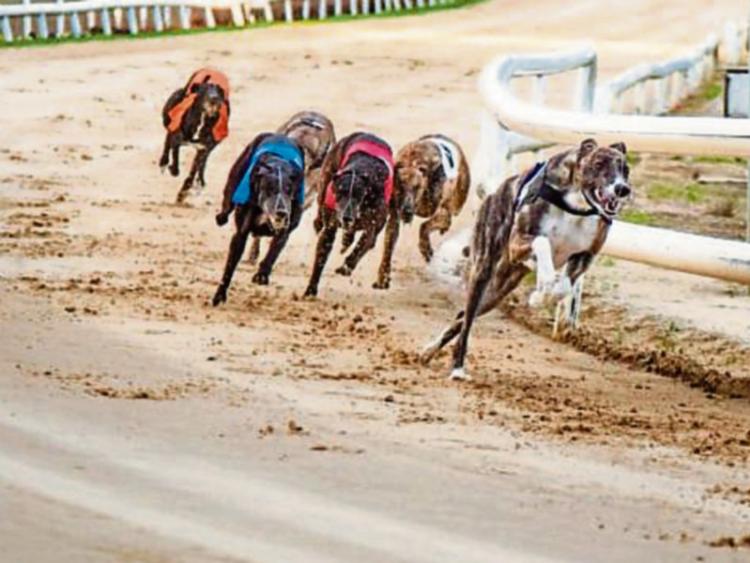 LIMERICK greyhound stadium will kick start 2020 in fine style with eight finals in a bumper card this Saturday January 4. The first meeting of the new year will be Thursday but Saturday’s card look most interesting with finals galore. The last final of 2019 in Limerick Greyhound Stadium was an Irish Retired Greyhounds Trust ON3 525.

Victory went to Dan and Peter Stackpoole with Annagh Lucille. The Rachel Wheeler trained winner had three and three quarter lengths to spare on the line in a winning time of 29.44.

Second was Gavin Neenan with Auburn, while in third was Rathagore Sue for Francis Woulfe.

Elsewhere, there were five sets of semi finals on the Saturday December 28 card.

In the first race of the night Guiney’s Ballygibba Spray won in 29.32. The winner just got up on the line to see off Leamaneigh Dream into second for Paddy Hennessy. Third and into Saturday’s final was Rockmount Gizmo for Shane Flanagan.

Guiney’s Ballygibba Sky won the second semi final in 29.67. Again the winning margin was just a neck. Second was Beron Magoo for Terry Roberts and Paul Blamires. In third was Knockfinisk Mick for Timmy Murphy and Phyllis Daly.

Next up was the Johnny Waters Memorial A4 525.

Thomas Gallagher had the fastest semi final winner in Girl Be Slick. The winner’s time was 29.26. Beaten half a length into second was Gilti Bonnie for Martin Giltinan. In third was Tiermana Sherry for Noel Moroney.

The other semi final was won in 29.77 by Mine Ceol for Mary and Frank Browne. The winner had three quarters of a length to spare on the line. Second was Inislosky Urchin for Mary Crotty. In third was Breda Hayes with Orlando Amelia.

Another set of semi finals was in the Greene’s Meat Suppliers A3 525.

The Denis O’Malley trained Rallying Knight was the quickest home in the semi finals. The Rallying Racing syndicate winner had five and a quarter lengths to spare on the line. The winning time was 29.06. Second was Hazelhill Blitz for Michael O’Connell, while in third was Take Control for Michael O’Grady.

The other semi final was won in 29.25. The Breda Casey owned Snuggie Bootsy won with two and a half lengths to spare. Second was Thomas Gallagher with Joe Be Slick, while in third was Pat Curtin’s Ardnasool Stacey.

Next on the racecard were the Track Bookmakers A4 525 semi finals.

Denis Hayes and John McGrath had the fastest into the final with Denises Belle. The winning time was 31.90. Five lengths back in second was Bookies Bicycle for the Lorna and Maureen syndicate. In third and into Saturday’s final is Lisbane Fort for Siobhan Bennett.

The other semi final was won in 32.24 by Hazelhill Queen for Michael O’Connell. Just beaten into second was Doon’s Patrick and Aoife Coffey with Carrigmore Dizzy. In third was Cathal Gleeson with Gleesons Rocket.

The final set of semi finals was win the Lucy Williams A3 600 with Ronny Wuyts and Patrick and Aoife Coffey each qualifying two greyhounds for the final.

The quickest semi final winner was Vigorous Sally for Ronny Wuyts. The winning time of 33.13 was good enough for a length and a half victory. Second was Bitter Fingers for We Haven’t A Clue syndicate while in third was Joeys Sasa for Michael Ryan.

The other semi final was won in 33.56. The winner was Trembling Juliet for Megan Flanagan. A half length back in second was another Wuyts runner Trembling Roberto. In third was another Coffey runner Carrigmore Bound.