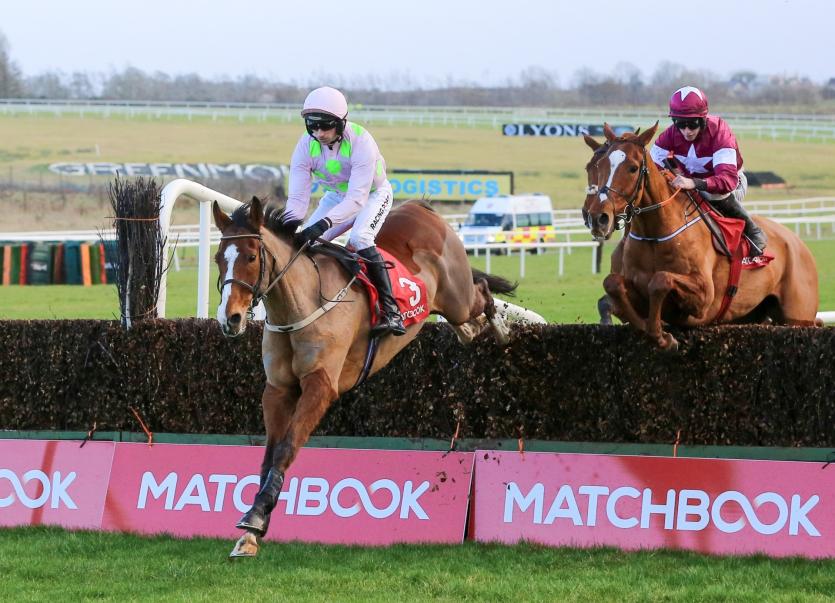 It was a St Stephen's Day to savour for Henry de Bromhead and Rachael Blackmore as the pair teamed up to win the two feature races at a lively Leopardstown. The feature Grade 1 Racing Post Novice Chase was billed as a match between Laurina and Fakir D'Oudairies but Blackmore forgot to read that script on Notebook who jumped like an old pro on the way to victory at odds of 7-1.

Notebook, who is now three from three over fences, kicked clear with Fakir D'Oudairies on the home turn and a giant leap at the last sealed the deal. He registered a one and a half-length victory and is now 5-1 favourite form 16-1 with Paddy Power for the Racing Post Arkle at the Cheltenham Festival.

Aspire Tower was also slashed for his Cheltenham target as the 18-length winner of the Grade 2 Knight Frank Juvenile Hurdle is now just 8-1 for the JCB Triumph Hurdle.

Just like at Punchestown for his impressive hurdling debut, Blackmore sent Aspire Tower straight to the front and he powered clear up the home straight to beat Wolf Prince.

There was a fairytale finish to Adrian Keatley's career as an Irish trainer as the Classic-winning handler sent out Drumconnor Lad to land the Bet Through Racing Post App Handicap Chase. He will move to Manton across the water in the New Year in pursuit of more opportunities.

We saw an extremely impressive winner in the opening Bet With The Tote Maiden Hurdle as 7-1 shot Cedarwood Road scooted clear in the hands of Davy Russell for an 11-length success over Jungle Junction. He took could have Cheltenham on the agenda after such a power-packed performance for young Meath trainer, Gearoid O'Loughlin.

Mt Leinster won the Thorntons Recycling Maiden Hurdle for Willie Mullins and Paul Townend, while the Noel Meade-trained Fauguernon landed a gamble in the Holden Plant Rentals Novice Handicap Hurdle. There may have been a star on show in the concluding Meetings That Matter INH Flat Race as Risk Factor delivered for Joseph O'Brien and Tom Hamilton.

What made the victory on Roaring Bull all the sweeter was the fact that it looked so unlikely for so long. Barry Geraghty looked destined to land another big pot following Epatante’s emphatic Kempton success on Thursday as Fitzhenry surged to the front halfway up the run-in, but there was to be one more twist in the tale as Kennedy swooped in the final 50 yards on the 16-1 shot to score by half-a-length.

Abacadabras cemented his claims for the Supreme Novice Hurdle following a stylish eight-length success in the first Grade 1 of the day. Heaven Help Us was the only one to put any sort of resistance to Abacadabras but Kennedy always had matters under control and sprinted clear after the last. Gordon Elliott’s new novice hurdle star is now 7-2 favourite for the Cheltenham Festival opener.

There was a shock in the other Grade 1 on the card, the Paddy's Rewards Club "Loyalty's Dead, Live For Rewards" Chase, as the hugely-exciting Chacun Pour Soi had no answers to A Plus Tard after a pulsating duel up the home straight. It continued the red-hot form of Henry de Bromhead and Rachael Blackmore who won both graded races on Thursday.

The feature race, the Grade 1 Savills Chase served up a thriller at Leopardstown on Saturday as Delta Work was delivered late by Jack Kennedy to deny Rachael Blackmore on Monalee by a head. It was billed as the best staying chase of the season so far and it certainly lived up to its billing as five of the field were still in with every chance approaching the final fence. Monalee kicked a couple of lengths clear after the last but Kennedy showed his hand last and came up with a royal flush. Delta Work is now 10-1 from 25-1 for the Magners Gold Cup at Cheltenham. Delta Work was the second leg of a glorious Grade 1 double for Kennedy, Gordon Elliott and Gigginstown.

Earlier on the card, Apple's Jade rolled back the years to land the Grade 1 Frank Ward Memorial Hurdle for the third year on the trot. Supported into 6-4 joint-favourite before the off, Apple's Jade set out to make all and she did just that under a confident Kennedy ride. She kicked clear off the final bend and pulled a staggering 17 lengths between herself and the evergreen Unowhatimeanharry at the line.

The Pertemps Network Handicap Hurdle went the way of the Robert Widger-trained Treacysenniscorthy, while Willie Mullins sent out the 1-2 in the Ballymaloe Foods Beginners Chase as Easy Game swooped late to deny Allaho.

That left Abacadabras to coast into contention rounding the home bend, getting to the front at the back of the last, but the win wasn’t achieved without Jack Kennedy getting somewhat serious. Elliott was quick to put that down to Abacadabras being babyish rather than anything else, and noted the fact that the Gigginstown-owned novice has history for not doing a lot when he gets to the front in his races. "Jack said that when he got to the front he didn’t do a stroke again. He was the exact same with Lisa O’Neill when he won a bumper at Galway earlier in his career," said Elliott.

Sharjah stole the show at Leopardstown on the final day of the Christmas festival, just as he did 12 months ago, as he won back-to-back runnings of the Grade 1 Matheson Hurdle under Patrick Mullins. Willie Mullins looked to hold all the aces heading into the final Grade 1 of the week, but punters expected last year's Supreme winner Klassical Dream to come out on top as he was sent off the 10-11 favourite. Favourite backers had their fingers burnt, however, as he stumbled badly at the fourth hurdle and almost got rid of Paul Townend. He trailed home last of the five runners.

It was left to stablemate Sharjah to sprint clear after the last under a confident Mullins and he stormed to a three-and-three-quarter length victory over Petit Mouchoir at odds of 9-2.

Sharjah was trimmed into 10-1 from 25-1 for the Unibet Champion Hurdle by Paddy Power afterwards, while Klassical Dream was pushed out to 10-1 from 7-2 following his disappointing display.

There were only three runners for the Grade 1 Neville Hotels Novice Chase, but the quality was high and it served up a thriller as Battleoverdoyen resisted the late surge of Champagne Classic by a length, with 38 lengths back to Lord Schnitzel in third.

Stormy Ireland made every yard of the running to land the Grade 3 Advent Insurance Irish EBF Mares Hurdle under Paul Townend, with Elfile completing a 1-2 for Willie Mullins.